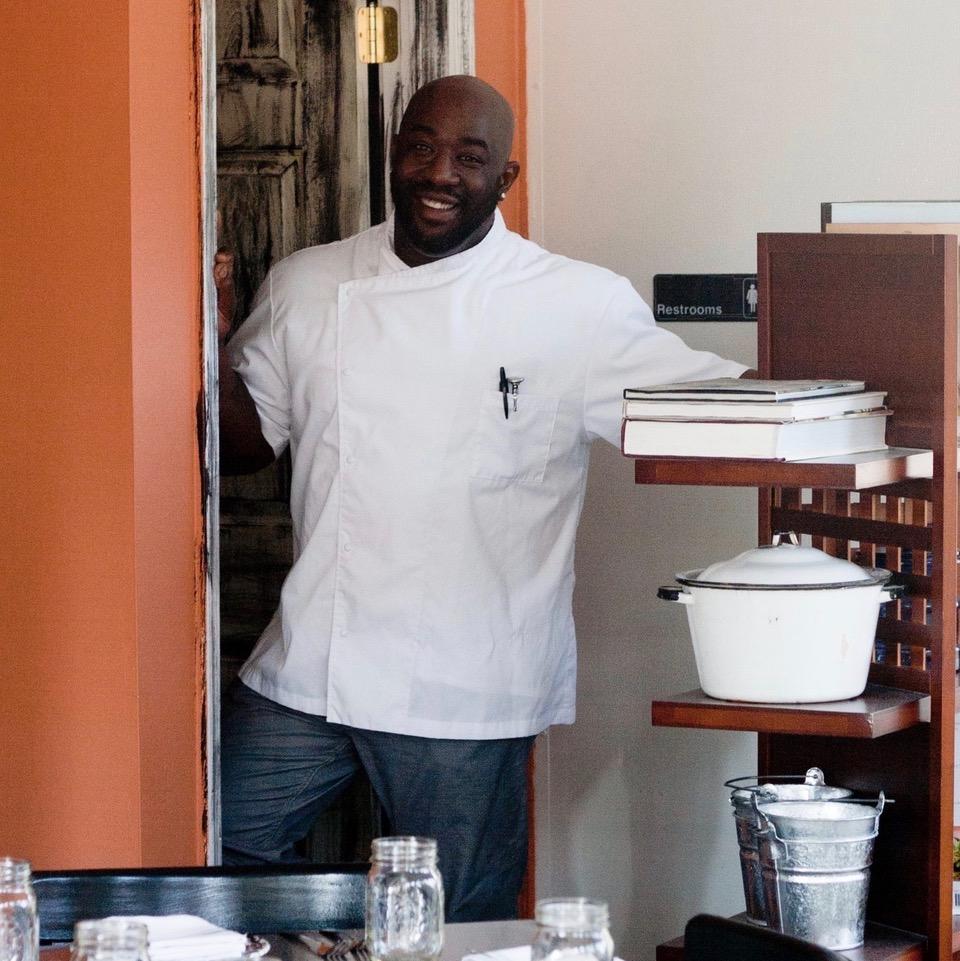 Since his appearance on Bravo’s “Top Chef” season seven in 2010, Kenny Gilbert has been busy making things happen.  The Ohio native who has traveled and worked around the world and now calls Florida home, opened his latest venture, Gilbert’s Gilbert’s Underground Kitchen, in Fernandina Beach on Amelia Island earlier this year on March 4.

“I have been aspiring to open a restaurant ever since I went to culinary school.  My wife Anna and I were up in New Jersey and she kept asking the question, ‘Well, how much do you think it’s going to take to actually open a space?’  And we would have debates going back and forth and I said, ‘Aw, it is going to take a least $150,000 if we find a good turnkey’ and she said ‘I think we can do it for much less than that,’” says Gilbert about making his dream come true.  The two put their savings together and began searching for locations online.  His wife Anna found a couple of places in Jacksonville and Gilbert found the restaurant’s current location.  “When I found this particular location, it was like the perfect place to be able to do like a little cool neighborhood southern restaurant.”

RELATED: Michael Caines: The Journey of a U.K. Top Chef

International Destinations on the Menu

Gilbert’s Underground Kitchen is more than a name. It represents family roots, southern culture, creativity and of course good food.   “The Gilbert part of the name, that is where the restaurant is linked with the southern kind of casual, rustic experience. And then Underground Kitchen, that is a term that is used for supper clubs and pop-up kitchens and that is where I bring in my experiences with my international training where I can change the concept of specials every week,” shares Gilbert.

On any given week, be prepared to take your taste buds on a culinary journey through the Caribbean, India, and the continental U.S. to name a few stops.

With more than 20 years of experience, Gilbert has curated culinary experiences that are designed to be shared and offer something different that one can’t get on the island.  Menu highlights include BBQ Alligator Ribs with Carolina Gold Rice Porridge, Citrus Mop, Padron Peppers and Brussels; Magret Duck Tasso Ham with Pickled Pineapple, Anise, Mustard Leaves and Country Bread and Smothered Organic Chicken and Dumplings with Green Beans, Carrots and Sage. Guests can also look forward to Gilbert’s fried organic chicken with housemade Datil Pepper Hot Sauce daily as well as the drop biscuits and greens, Hoppin John, mac and cheese and cheese grits. Be sure to save room for dessert which will include Coca-Cola Chocolate Cake with Sour Cream Chocolate Icing and Dried Cherry Preserves; Yam Turnover with Buttermilk Glaze, Blackberries and Cracked Pepper; and Banana Fosters Parfait with Gingersnap Cookies.

“I basically grew up with southern roots.  I have an international training background and I have been waiting to do something that kind of was a tribute to my family and their background.  My dad taught me how to do BBQ, he is from Chicago.  My mom being from St. Augustine (Florida), I learned how to do all of the sides and all of the kind of stuff growing up with her. So  I wanted to be able to do something that had a combination of both as well as taking all of my international experience through working with the Ritz Carlton and traveling abroad and  do it all under one roof.”

Creating the right dining atmosphere was just as important as the menu.  The interior is a crossroad where modern rustic meets southern hospitality with displays of cooking pots, milk jugs, burlap curtains and old railroad signs.   The restaurant has three different rooms that take on a look and feel of their own and cater to a total of 62 seats.  The Safe House Lounge is designed to make you feel as if you are in the comfort of your own living room as you sip on a glass of wine and munch on small bites.  Step into the Muscadine Hall for our traditional dining experience and in Datil Pepper Park, the outside patio area, enjoy BBQs all year long as well as witness the herb garden that the restaurant will source its ingredients from.

With just three months under his belt as a restaurateur, Gilbert says things are going well but it also means that he has less time at the moment to participate in other activities that require travel. However, if you are in Florida and close by, be sure to check Gilbert out at his upcoming cooking demonstrations at Publix and William Sonoma.  In addition, he’ll be making an appearance this fall at Walt Disney’s Epcot International Food and Wine Festival.

Gilbert’s Underground Kitchen will serve dinner Wednesday – Saturday and Monday, 5 – 9 pm.  BBQ is served on Saturdays and Sundays in the parking lot from 11 am until it is gone.  The restaurant will be closed on Tuesday and Sunday nights.  UK is located at 510 S. 8th Street, Fernandina Beach, Fl 32034.  Reservations are available via the restaurant’s website, OpenTable, or by calling the restaurant directly at 904-310-6374. For more information visit: www.undergroundkitchen.co.