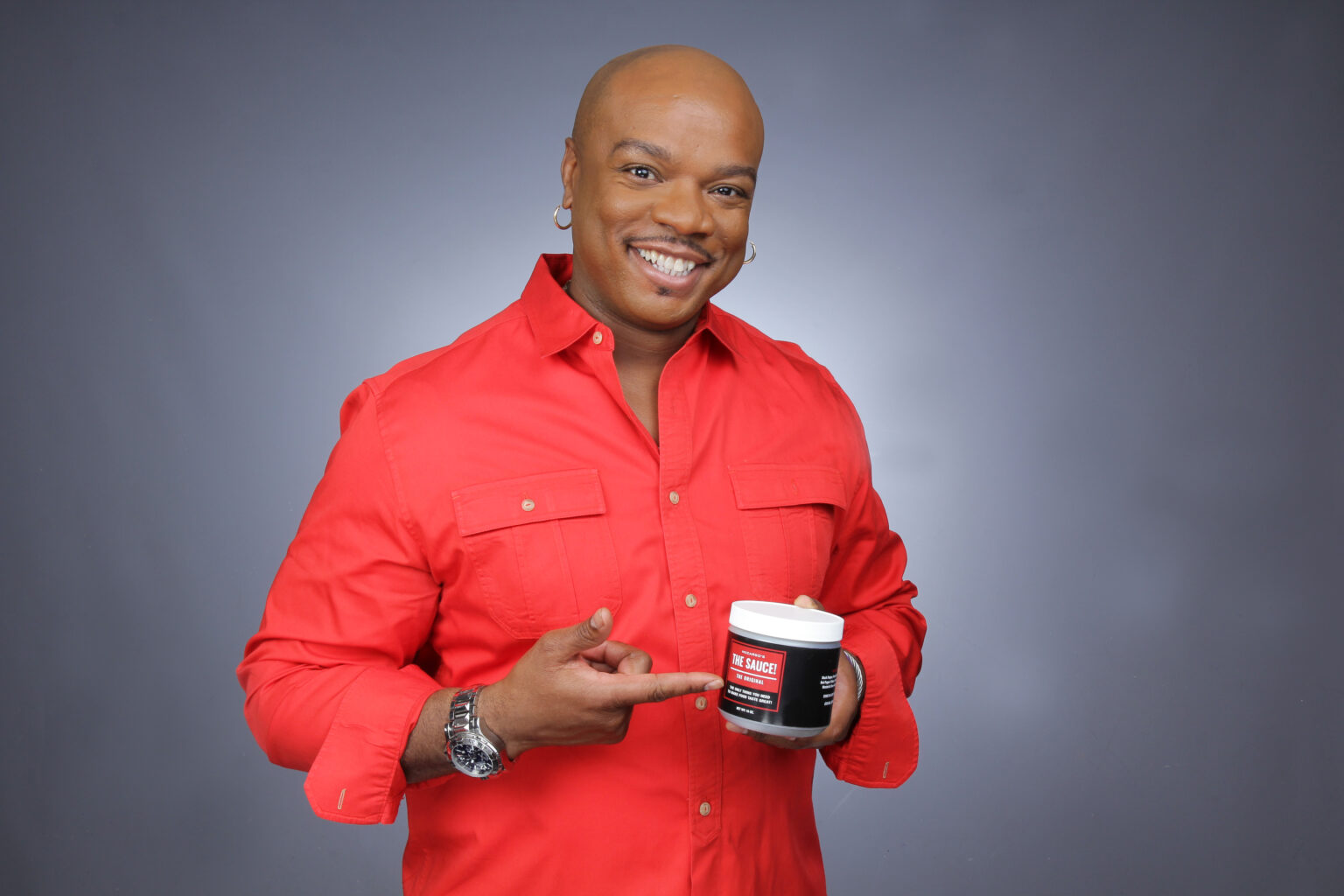 Long before a billion-dollar revitalization project transformed the downtown Camden, New Jersey waterfront, a hometown star dreamed of changing his city’s tarnished reputation. Chef Aaron McCargo, Jr. envisioned a row of restaurants and thriving businesses replacing vacant lots and empty storefronts. That picture is starting to take shape for him on Market Street because of the attention he attracted as the host of the Food Network show, “Big Daddy’s House.”

“It couldn’t have been but a blessing from God to be able to actually host a show. I never thought in a million years that I would be on TV and the center of a show about what I love to do,” McCargo says. The Camden native’s celebrity grew in the years following the show’s debut in 2008 through his appearances on other television programs as well as his cooking demonstrations and speaking engagements around the world.

As a chef, McCargo has worked in more than nine restaurants. He knows precisely how risky opening brick and mortar establishments can be no matter where they are or what they serve. He and Alberto Nieves, his closest friend from kindergarten through high school, opened a couple of Camden restaurants together in 2005. They closed two years later.

McCargo tells anyone with restaurant ambitions that making a fantastic first impression is not enough. Attracting devoted patrons, maintaining a consistent quality of food, drinks and appearance as well as retaining a professional staff are all necessary for a restaurant to succeed. “I always tell them to make sure you have a lot of working capital because you have to market this properly,” says McCargo. “You have to make sure you give your staff good benefits to keep them. A low turnover rate for your staff is just as important as customers coming back to support your business.”

The former Food Network host has plenty of ideas for opening another restaurant someday. For now, he’s living in the moment and concentrating on the blessings from his love of cooking. It all started in a two-bedroom house where he lived with his parents, three brothers and two sisters. In the kitchen next to his mom was his favorite spot. “It’s a gift from God. I was standing between the refrigerator and stove when I was a kid. She’d be frying chicken or whatever, and the grease hit me in the face,” McCargo says.

He laughs while sharing the memories of watching his mom and dad cook. He enjoyed the textures and smells they created, often on a tight budget. He describes his mother as the original pioneer woman who created dry-aged steak when the power went off in the refrigerator. It is a survival story. “I enjoyed it every day, watching them take their hard-earned money and turn it into sustenance. Whether it was spaghetti and meatballs or fish sticks and French fries, they made it the best they could make it for us to really appreciate.”

McCargo also watched chefs on PBS shows and played with his sister’s Easy-Bake Oven. He was cooking meals by the time he was seven and continued even when other kids teased him about his passion for being in the kitchen. “My dad would always keep encouraging me and tell me one day they would regret that. He called it because this cooking thing I’ve stuck with over 30 years has been a blessing to my family and me, and I just love it.”

The blessings multiplied when the chef took his wife Kimberly’s advice and applied to compete on “The Next Food Network Star.” He won the competition in 2008 and began hosting “Big Daddy’s House,” a cooking show that promoted his talent for creating flavorful dishes from simple recipes with cultural influences. His culinary style had presented challenges in the past because McCargo broke a lot of the accepted food rules and longed to see someone more like him on TV. “It left me to stand on an island by myself. But then I got a show where I could explain the reasons behind the way I cook, the reasons behind the way I flavor food and how folks could eat on a budget and also have fun in the kitchen.”

The show attracted loyal fans in its first six episodes and lasted for six seasons. The 76 episodes continued to air on the Cooking Channel through 2018. Viewers enjoyed watching McCargo in the kitchen with his then 5-year-old son, Justin, who turns 16 in January. “I like the fact that he still loves to eat. He’s my biggest critic. I can always trust his taste buds. If he likes it, everyone else is going to love it.”

McCargo still cooks just about every day when he is not traveling. Justin and his siblings ask for cooking advice now and then. Their dad has taught them the basics of taking care of themselves, but they prefer to leave the kitchen duty to him. “He and my daughter Jordan and my oldest son Josh, they are the three judges. So, I’m always in ‘Chopped’ (a Food Network competition show). I just never get chopped,” McCargo says with a chuckle.

The Camden chef's culinary curiosity as a child attracted him to home economics and cooking classes in middle school, high school and the Academy of Culinary Arts at Atlantic Cape Community College. He found a lifetime mentor at age 17 when he landed a job at the Harbour League Club with executive chef Jonathan Jernigan. “The Black chef there became my best friend. He kept whipping me into shape day after day. It wasn't just about the food. It was about appearance. What went into the food was what you represented about yourself,” McCargo says.

Jernigan still teaches lessons about maintaining a clean uniform including hands and nails to his staff and students at the Cathedral Kitchen (CK) in Camden. The grassroots organization, where Jernigan is the executive chef and culinary instructor, provided 100,000 meals last year in its soup kitchen. His leadership has resulted in 80% of the 275 students in CK’s Culinary Arts Training Program landing jobs after graduation.

McCargo now shares some of what he learned from Jernigan and other mentors with the young Black males in his nonprofit program, Play to Win. The chef personally guides them on becoming successful men from high school through college. “If you have someone to help guide you and help you search out what is your passion, it will get you on a good track at an early age. A lot of our young minority men don’t get that opportunity. They don’t have a clue as to which way to go.”

Even with encouragement from his parents, McCargo found it scary to figure out how to prepare for a culinary career when he was a kid with few role models to follow. He tries to let the young people he mentors understand there is much more they can do besides standing on street corners. “I’m facilitating and talking to these young men as I talk to my own boys. I tell them how much I love them, how much Jesus loves them, and how much talent they have, and that no matter where they are from, they are great,” McCargo says.

Twenty of the 30 young males in McCargo’s Play to Win program have gone to college, a trade school or into the Armed Forces. He hopes they will help inspire other young people to cultivate dreams to pursue.

Big Dreams on the Burner

The chef whose bold, spicy flavors became a calling card to culinary success has other big dreams he still wants to accomplish. McCargo will launch a new website in January to promote “The Sauce” and “The Spice” products he developed to make preparing meals easier for home cooks. His sauce and spice mix can be used in everything from chili to collard greens and baked chicken to salad dressings.  “It’s $10 a bottle for the sauce and $8 for the spice. You can get four or five good meals for a family of four out of each jar.”

The chef also wants to follow up his “Simply Done, Well Done” cookbook from his Food Network days with a new one for the Big Bear pellet grill McCargo designed for home cooks. “It will show folks how you can do everything you do in your kitchen or on your traditional grill or smoker with this one piece of equipment. You get fabulous results,” McCargo says.

That’s not all he has on his vision board for the future. The celebrity chef would like to teach cooking classes someday and host another television program. He thinks the time might be right with the media’s increased recognition of Black chefs. “This is the moment I’ve been waiting for. The only disappointing part is that no one has come up with a minority food network channel to give chefs of different nationalities a place to showcase their talents. It could include African Americans, Latinos, Jamaicans, Africans or Asians.

Chef McCargo believes the food industry becoming a spectator-style sport makes it difficult for people who want to do cooking preparation shows to get on TV. Still, he has faith that God will continue to lead him to the right people to help him realize his other big dreams of making people happy with his cooking. “He put the right people around me to get me to where I am. A lot of folks that don’t believe don’t want to hear it. A lot of folks that do believe are embarrassed to say it. And I can’t be embarrassed or ashamed for what he’s done for me.”