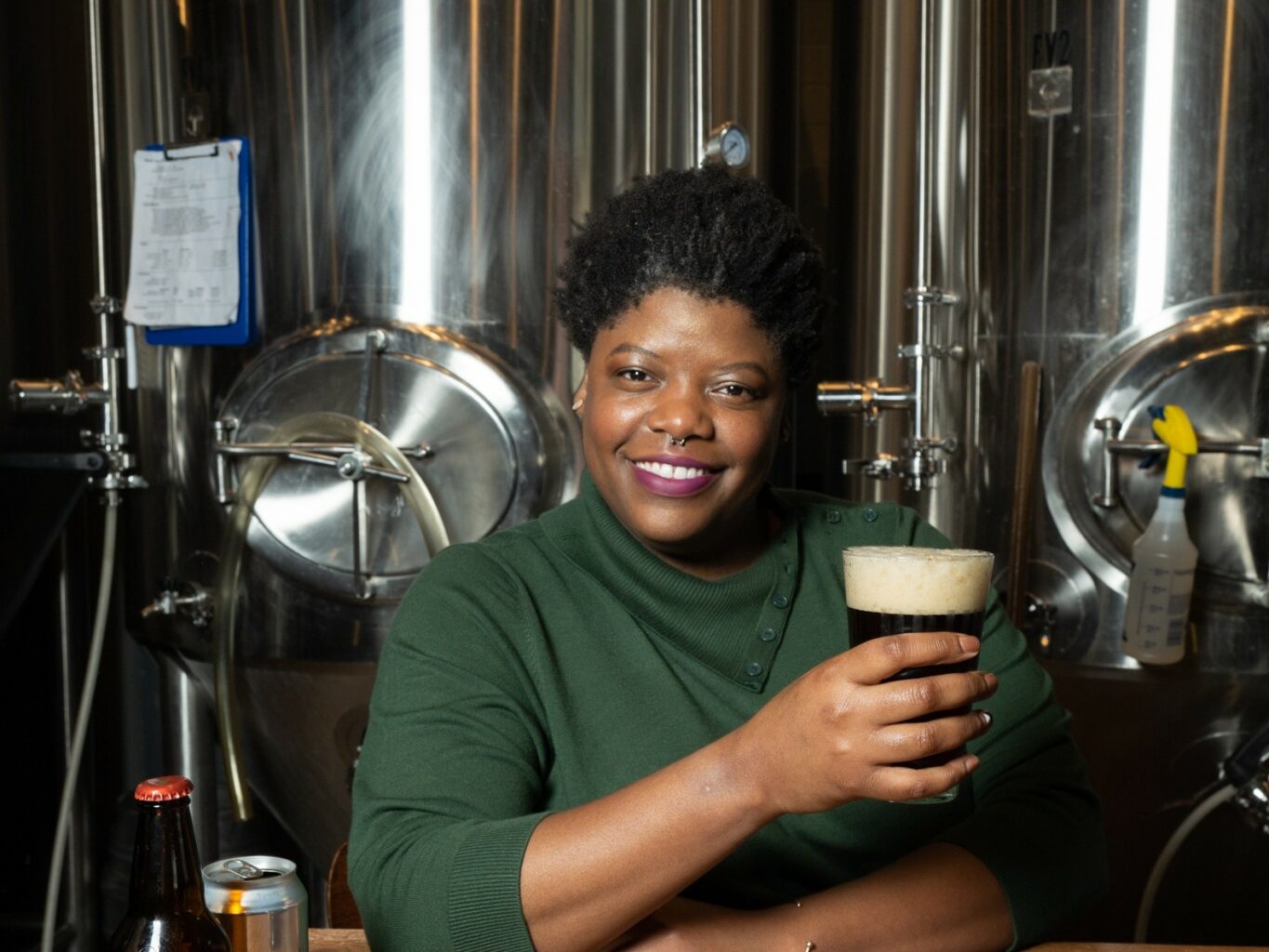 “I want to create a community that breaks the stereotype that “women don’t like beer” and reach anyone interested in learning more about the craft beer movement,” says Elle Thomas, her soft voice brimming with a genuine passion for the drink that sits in front of her. It’s early evening on a Tuesday, and the taproom at Black Star Co-op is happily busy, exuding the energetic any-time buzz that Austin, Texas, is famous for.

Black Star is an ATX craft beer stalwart and has the proud distinction of being the first co-operatively owned and managed brew-pub in the world. Thomas has chosen to meet at the pub for convenience but also because she enjoys the warm, familial atmosphere of the co-operative taproom, which shares an inclusive ethos with her own craft beer business, AirBrewNB.

The Hunt for Good Beer

Thomas’s journey into the beer world began at 17 when she spent a year in North Rhine-Westphalia near Düsseldorf, Germany, on a study-abroad program. “I didn’t know I was drinking some of the best beer in the world. I was just excited to be legally drinking at 17,” she says, recounting her early love for Kölsch and Altbier.

Returning to the world of American macro lager was something of a shock. “When I tasted adjunct lager, let’s just say I was disappointed and confused. ‘How is this beer so different from what I had in Germany? Isn’t it all the same ingredients?’” she asked.

This question led Thomas to begin researching the history of beer and brewing and looking for beers that offered more flavor and complexity than standard macro lagers. As Austin’s brewery scene took off, Thomas had the opportunity to experiment with different styles and expand her beer knowledge, and the more she learned and tried, the more she fell in love with the science and culture.

Thomas’s role as a former corporate trainer enabled her to travel around the U.S., trying beers across the country, but arriving in a new city often meant taking a chance on which breweries to visit. “I would sometimes be disappointed when I’d spend $15 on a rideshare one way just to learn the brewery only had farmhouse ales and west coast IPAs, which are not my favorite styles,” she explains. “I thought it would be nice to provide a personalized brewery tour for out-of-town visitors with a local guide who curated a tour based on their specific beer preferences and preferred ambiance for the cost of a rideshare.”

Spotting this gap in the market, Thomas launched AirBrewNB in 2018, with the goal of offering a beer experience that is personalized, sensory, and inclusive – a far cry from the party buses that ricochet around Austin’s breweries at weekends.

“AirBrewNB is the opposite of what most people think when imaging a ‘beer tour,’” Thomas says. “We slow down and discuss the art that is beer and the community that crafts the inviting atmosphere.”

Thomas’s understanding and appreciation of beer as a cultural artifact mean her tours are about transforming the drinking experience, savoring, not chugging beer, and indulging and expanding your palate. “If someone comes on a tour with their friend or partner and says they don’t like beer, I’ll go out of my way to learn about their tastes and find a beer they can enjoy.” She says, “Beer has so much more to offer than many people are aware of.”

The Future of Beer is Womxn

With issues around diversity in beer currently making headlines worldwide, Thomas has been way ahead of the game with both her in-person and virtual tours. “I didn’t initially start tours because of lack of diversity in beer, but I soon noticed that it’s an issue,” she observes.

Thomas prefers to employ womxn tour guides, whom she labels her Lady Brew Crew, both to support other womxn in beer and as part of her mission of offering a safe and inclusive environment for traditionally marginalized beer drinkers.

“We get tons of support from male counterparts, but our goals are to showcase womxn are also knowledgeable about beer,” she tells me. “I’ve been told people feel safer getting in a car with a womxn tour guide and have worked with womxn who left the industry because of bad experiences but came back for a womxn only space. I want to create a safe space for womxn and minority beer drinkers, as well as uplifting womxn in beer.”

Lady Brew Crew tour guide Becca Measells is equally passionate about encouraging diversity in beer through their experiences. A beertender at Hopsquad Brewing in North Austin, Measells met Thomas through a mutual friend and has been leading AirBrewNB tours for over a year.

“AirBrewNB is about inclusivity in the beer community, which extends to both the people who consume craft beer and those who own and operate craft breweries and taprooms,” she asserts. “With knowledge and enthusiasm, we challenge the perception of who a ‘beer nerd’ might be and give voice to those in the industry who are traditionally underrepresented.”

The experience of leading virtual tours has been positive and rewarding for Measells. “I enjoy that we get to connect with people from all over the world and bring them together to make beer interesting and accessible to everyone and that as I’m teaching, I learn something new each time,” she says.

AirBrewNB tours are both personal and holistic. Once signed up, participants are given a short questionnaire to complete, covering their preferred beer styles, ambience, and what they hope to get out of the experience. With expert knowledge of the local beer scene, Thomas and her Lady Brew Crew can ensure that guests maximize their time in the city by visiting the spots that are best suited to their tastes.

The tours are also a learning experience, as the Lady Brew Crew leader shares her extensive knowledge of beer history and culture, as well as vignettes of local information with her guests along the way.

Groups are limited to a maximum of four, ensuring that experiences are intimate and interactive, as guide and guests get to know one another, often making new friends. “One of my most memorable experiences was curating a tour for two couples who were both celebrating their 5-year anniversary, so I organized a special tour around the theme of wood to represent their five years of marriage,” Thomas recalls warmly.

This level of care and attention kept AirBrewNB running successfully with a booked-out schedule and glowing testimonials – until the pandemic struck. “To be honest, like most small business owners, last March, I was not sure if I would still have a business by the end of 2020. But then a light bulb! I realized I could keep my business open, continue to teach beer education, and promote purchasing beer from local breweries around the world at the same time,” shares Thomas.

The decision to pivot to an online model has been incredibly successful and hugely rewarding for the Austin entrepreneur. “The realization the pandemic could result in great breweries closing because of closed taprooms and limited access to distribution chains floored me,” she says. “I love that by purchasing beer from their local breweries [online participants] are able to support their local craft beer scene and at [the same] time a local small business.”

By running themed online tours open to the public around the world, but with options for private and corporate groups, Thomas not only protected her business from the impact of the pandemic, but she has also been able to support local breweries on an international scale, and offer much-needed social interaction for her guests.

“This year has shown us how much we can push the bar on virtually doing things, and I am grateful for the opportunity to bring people a little joy in a time we are all struggling to socially connect,” she says. “And it’s been so much fun to meet people from all over the world, many of whom didn’t know about their local breweries before signing up for the tour.”

Families and colleagues have reunited virtually over beers and friendships forged across continents, all under Thomas’s watchful tutelage.

Virtual tours can accommodate up to 30 people, but Thomas tries to keep them smaller to retain a sense of intimacy. Beer “show-and-tell” is a key part of the AirBrewNB virtual experience. Participants are encouraged to purchase locally brewed beers in advance and introduce themselves while showing what they are drinking.

Thomas or her tour leader will then talk through each beer style and its history. With tour topics including a history of American beer, an obscure history of beer, and the “herstory” of beer, the virtual AirBrewNB experience is as exciting, personal and inclusive as the in-person Austin tours and has proven equally successful.

Thomas’s Herstory tour is her most popular and evolved out of the feedback she was receiving from her guests. “I originally had it as part of my Guide to American Craft Beer Culture, but people were so fascinated by the topic that I ended up creating an experience that only focused on women's role in beer history,” she explains. “I have always enjoyed learning about impactful women in history that may not have the same platform as male counterparts, so it is nice to share this knowledge with others.”

With re-opening gathering momentum in Austin, Thomas is looking to re-open in-person tours in early 2022 and begin in-person corporate and at-home events in the autumn. While she’s excited to resume the city tours, Thomas plans to continue her virtual experiences in tandem, having gained so much from them as both a businesswoman and a beer educator.

“Not only do I get to demonstrate my passion for beer, but I meet people from all over the world who are equally excited about it,” she enthuses. “Beer can be like music – people connect through it almost like a language.” And like learning any language, having a passionate and talented teacher is absolutely key, which is exactly what Elle Thomas and AirBrewNB offer.

Ruvani is a travel-loving beer writer with bylines including Good Beer Hunting, PorchDrinking, Beer Is For Everyone, Texas Highways and Craft Beer Austin. She blogs about beer in Central Texas and beyond, as Craft Beer Amethyst and is a vocal advocate for diversity, equity and inclusion in beer. As a British South Asian woman living in Texas, Ruvani brings a unique voice to the world of craft beer. Find her on Twitter and Instagram as @amethyst_heels.