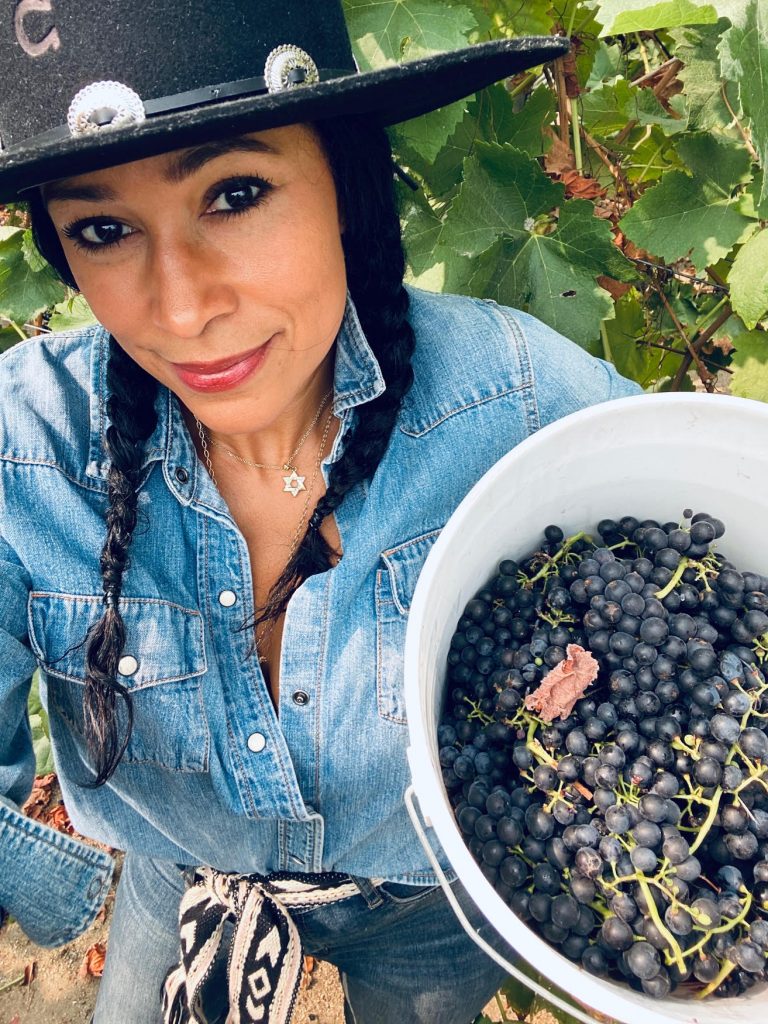 For Amber Patton, parenting is a lot like viticulture, with both relationships rooted in reaping what you sow.

As the sole proprietor of Amber Vista Wines, Patton has been growing grapes on her three acres of Rancho Santa Fe property since 2016. She’s also a devoted mother to two sons, 11 and 13, who are equally enthusiastic about nurturing the grapevines.

“You have to give to receive. What you put into a relationship, that’s what you reap and it's like raising children—when you spend time with them, you get close to them, and they give back to you. It's a circle,” she says. She often thinks about the vines, protects them, and tends to the other plants surrounding them.

As a recent Judaism convert, Patton began to say Hebrew prayers over the vines about a year ago. The kids joined her every Shabbat, and they were pleasantly surprised to see their 2020 harvest was their largest yet.

Cultivated by Air and Land

Twenty years ago, Patton was a flight attendant for Delta. It was there that she would cultivate a love of wine. The flight attendants took detailed wine and etiquette courses, and her curiosity grew as she and her colleagues enjoyed the array of unconsumed wines from first class.

She would eventually cultivate friendships with wine professionals —growers and winemakers—and gradually pick up bits of knowledge that would help her to start her own business.

Patton’s dream was to someday retire with her husband and buy a vineyard, so she could spend her older years tending to her farm. But her calling was realized sooner than expected when she and her then-husband split.

She found a quaint ranch house in Southern California with syrah grapevines that were initially laid down by an expert vine planter from France. The vines were dormant the year before Patton arrived, so it took some nurturing to get them to express their full potential, but today, they’re vibrant plants with a full canopy and healthy, balanced grapes.

The property also has a large vegetable garden, which Patton uses to provide food for her family. She practices sustainable agriculture and intervenes as infrequently as possible with the vines to show utmost respect to the earth.

For example, when nearby palm trees were infected with a fungus, instead of spraying them with a fungicide as she was advised, Patton pulled them up to stop the fungus spread.

“I live on the vineyard, so my home is there. It is my property where I live with my children, so I'm really protective of the space. That allows me to have a sustainable little grape farm. I control the microclimate and what kind of products are being used around the grapes. I'm super, super picky about what my gardeners do and about who comes on to the property,” says Patton.

When the grapes’ sugar levels have reached perfection, they’re ready to harvest. And to do this, Patton rallies close friends and family to help with the job. People gather at the vineyard at 5 am, and Patton and a chef serve mimosas and pancakes to get the crew pumped for the occasion.

It’s a family affair where everyone grabs a pair of shears and jams to R&B as they fill their buckets. It’s a joyous time every year, but the 2020 harvest, in particular, was remarkable because it was a familial experience that everyone missed so much.

More Than a Bottle of Wine

Amber Vista Syrah is driven by notes of pure, ripe cherries and toast, while the Anber Vista Syrah Rosé is an homage to the neverending days of summer, overflowing with strawberries and white roses.

At $95 per bottle, Patton knows her wines aren’t cheap, and she’s unapologetic about the love and care that more than justify the price of the wine. “It’s family experience and intimacy expressed in a bottle,” she says.

They’re not for the consumer looking to grab a bottle mindlessly. Patton would instead appeal to conscious consumers who want to buy quality wine, support a Black business, and directly impact one Black female farmer's life. Patton and her sons are technically first-generation viticulturists on this journey together, and their involvement in the growing process has been a highlight of the process for Patton.

“Winemaking is one thing but being a grower is a totally more involved process,” Patton says.

What started as a hobby has blossomed into much more wine than Patton, a Nashville, Tennessee native, could consume or give away. “It was…just going to be a very involved, time-consuming hobby, really. That was really why I aspired to own a vineyard.  But the vineyard started really bursting, and I gave it a lot of love, and it just started producing a ton of grapes.”

Faced with the choice of having an excess of grapes or creating a business, Patton hired an attorney to get a liquor license so she could legally sell some of the 400 bottles she produces annually.

Currently, her license forbids her from selling hand-to-hand to consumers, and she’s also not allowed to have a winery on the premises.  However,  Amber Vista Wines is permitted to operate a tasting room for private events. The online, sales only license has meant that Patton’s operations have been largely uninterrupted during COVID.

The Gospel of Farming

If Patton is one day able to receive help from a partner, either professional or romantic, she will explore the idea of expanding the vineyard. But she would need help managing the volume growth, especially if she were to buy another nearby vineyard. It’s not completely off the table, though, as Patton would be able to plant other grape varieties and possibly have a space where she can host large gatherings and welcome tourists.

But for now, Patton, who’s also a real estate agent, happily has her hands full. She’ll continue growing and producing wines and spreading the gospel of farming with a gentle reminder that whether you’re growing grapevines or potatoes, all one needs is a pot and some dirt.

“Anybody can plant grapes and anybody can plant food. You can save money and know where your food is coming from. All you need are seeds, water, sunlight and some TLC, and they will grow for you.”