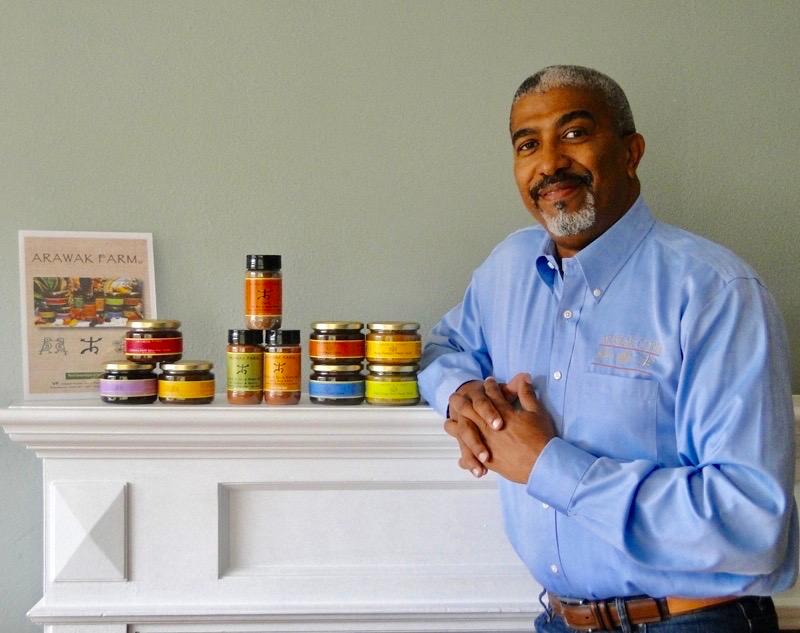 If you haven’t heard the word Arawak before, chances are you’re not familiar with the rich history of the group of indigenous people of South America who settled in the Caribbean. This is a history lesson that gourmet purveyor Vassel Foods shares through the production and sales of its pepper sauces, fruit spreads and dry rubs under the Arawak Farm brand.

All of his life, owner and creator Lloyd Vassell was reminded that being an Arawak Indian represented heritage and pride. Born of Jamaican descent in New York, Vassel says, “As farmers and fisherman, they cured, stored and flavored their foods with spices and peppers,” referring to his ancestors. Being the son of a chef and a former chef himself, Vassel has been eating and cooking with those very spices, peppers and other ingredients all his life. “Every West Indian has dry rubs and jerks and have what is called ‘gravy’ which is an old rum bottle filled with peppers, carrots, cho-cho peppers, allspice and vinegar. That is where the extra heat comes from.”

RELATED: Deaf Can! Coffee Changes Lives, One Bean at a Time

RELATED: For the Love of Chocolate: Celebrating Black-Owned Businesses Working with Cacao

It’s All in the History

For more than 20 years, Vassell has been creating his pepper sauces which are known to pack some heat. He didn’t decide to offer them commercially until after being hospitalized with ulcerative colitis which led to the removal of his colon. Vowing never to return to corporate America, it was a natural transition back into the world of food that now has him running Arawak Farm full throttle. “We are very big on the Arawak history, we’re very big on promoting it and at the same time we’re using indigenous spices, indigenous peppers to create our products. Allspice, nutmeg, cinnamon, ginger, pineapple and the peppers,” says Vassel.

Prior to his last stint at Sun Microsystems in Northern California’s Silicon Valley, Vassell tread the waters as a restaurateur twice over. First in New York and then across the country in Sacramento where he worked with Olivia Brown from the hit show “Miami Vice” and her namesake restaurant, Ms. Olivia’s. Leaving the kitchen behind, he re-entered corporate America in the tech world which could have proved to be just as stressful.

Bringing it all full circle, he now offers gourmands four pepper sauces that include a mango pineapple, mixed berry, sweet ginger basil and of course Jamaican jerk. The fruit spreads add a nice kick of heat to dressings and desserts.  Finally, the dry rubs offer an amazing amount of flavor when used on meats and vegetables. “We are not a hot sauce, we’re not a jelly and not a typical dry rub. Our pepper sauces are gluten-free, low sodium, no sugar and little to no vinegar. We put it in the type of jar that we have because we want you to spread it. The fruit spreads were a leap of faith because I thought we should have something sweet,” says Vassell.

Tradition That is Good For You

In addition to sharing Arawak history, Vassel thinks that it is important to highlight the fact the products are low in sodium. Something you wouldn’t expect from West Indian products. The jerk rub has only nine ingredients and is much lower in salt compared to other rubs on the market, something he is very proud of. He is currently working on a coffee-based rub made with Blue Mountain Coffee imported directly from Jamaica. If you are a coffee drinker, you know this is a big deal.

All Arawak Farm products are available online and will soon make their way into select military exchanges. In addition, Whole Foods and Andronico’s shoppers in the San Francisco Bay Area may soon find the products on the stores’ shelves in the near future. Vassell would also love to partner with airlines as well as foodservice companies and as he has learned, it all comes by taking it one day at a time.