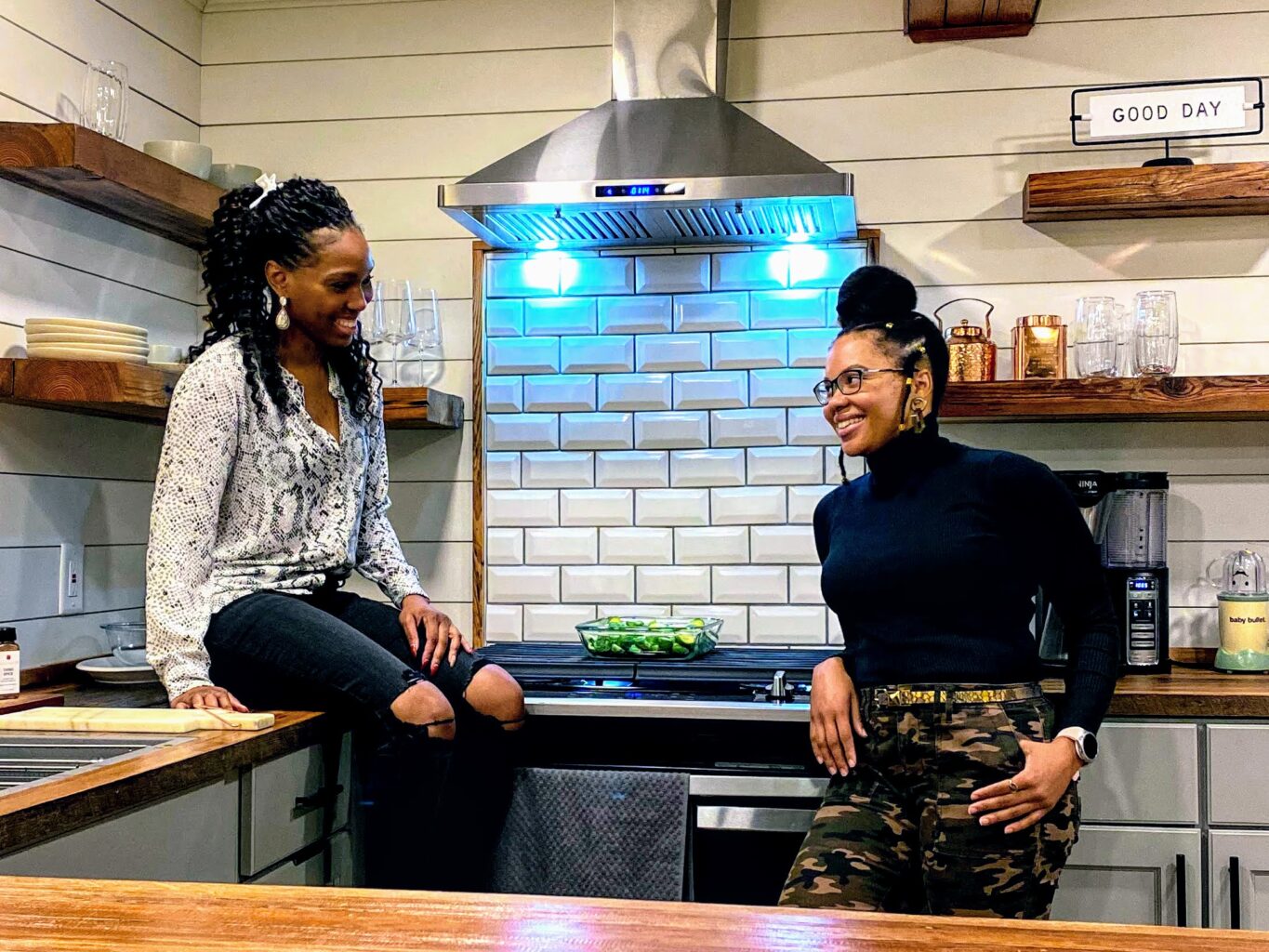 Suzanne Delica and Jelece Morris were first-generation college students at the University of Florida when they became friends. Both shared similar course loads as engineering majors and also bonded as foodies with Caribbean roots.

“I used to watch my mother and godmother in the kitchen…just in awe of how meticulous they were and through many recipes, they always started from scratch,” says Delica.

Raised in Florida with Haitian roots, Delica sought to follow in their footsteps. Though admittedly, she was never much help, according to her mother. It was in college when she began cooking solo.

“I saw being in the kitchen as an adventure, and the spirit of my mother and godmother allowed me to explore that,” she says.  With this confidence and eagerness, she began collecting and building recipes. Curtis Stone, one of her favorite chefs, became an inspiration. Food was a  communal journey she shared with friends.

While Morris was no chef, her Jamaican roots informed her about how food and culture intertwined. “Food was a big deal growing up. It was a connector and a celebration,” Morris says.

After college, Delica and Morris remained close friends, although each pursued different paths in life in different cities.

Delica started a family but always had a project going on as a creative. She poured her creativity into running a fashion boutique. Sadly, it was short lived as an explosion from a gas leak engulfed her dreams.

Morris was earning her MBA at Morton University and in the thick of management projects and government contracts. But she had an itching to create something else and knew just who to reach out to.

With Morris residing in Atlanta and Delica in Maryland, they initially started with a phone call. This conversation later led to them creating their vision board.

“The pandemic stretched us in all kinds of ways. We took it as a challenge to stay in the creative space,” they share in a social media post.

When it came time to create, the type A foodies leaned into this partnership to develop their idea, an all-spice seasoning that fully represented their Caribbean heritage. In 2020, they stepped forward together to create a product that was bold and captured the Caribbean flavors of their childhood—giving it the name BoCa Flavor.

The first offering from the college friends turned business partners is Taíno Spice, a 19-ingredient blend with robust aroma and, yes, bold flavors. It contains herbs such as thyme and oregano, with citrus notes and what the two describe as “island heat” from pink pepper berry, scotch bonnet, cayenne and habanero pepper.

Deriving its name from the Indigenous people of the Caribbean, Taíno Spice (pronounced tie-ee-no) is fresh, non-GMO and MSG-free.

Delica and Morris wanted to develop an authentic flavor that embodied each of their cultural heritage. “We considered all the spices that we were accustomed to growing up and all of the spices used to achieve that taste,” Morris explains.  “We wanted to create an enjoyable and efficient way to have all of that [flavor and aroma].”

This meant researching, testing, and tasting to achieve the right balance and body for their first BoCa Flavor offering. Delica recalls hauling suitcases through the airport from their trips to Florida, Jamaica and Haiti with some of the brands they knew.

Delica and Morris wanted to be intentional about creating the Caribbean flavor they knew, while paying homage to those they saw infusing it in their cooking.

Creating a spice with bravado was just the start. Delica and Morris wanted to challenge the Caribbean culinary narrative.  The two knew it was important to showcase the nuances of Caribbean flavor.

“When we were spending time creating the palette for Taíno, we received approval from the aunts, cousins and elders in our families. They spurred us on [to continue to develop] BoCa,” Delica says.

The duo knew if they continued to be intentional about developing the all-spice seasoning, it would be well worth it, which meant challenging the mold.

“We didn’t want to be pigeonholed to the international food section in the grocery store. We believe BoCa belongs right alongside the McCormicks of the world—not just folded in with jerk seasoning,” Morris adds.

With this, BoCa’s packaging and design were not falling into the same color scheme of red, green, yellow, or black that consumers tend to see from products marketed as Caribbean. They opted for a white label with soft prominent font and festive mosaic-like pattern on the side paneling.

In addition, to reach a larger customer base, the two knew starting online would be the best option.  “E-commerce is a great way to reach customers, and we wanted to ensure that our product was accessible to people everywhere,” says Morris.  While the focus is on growing the customer base through e-commerce, they hope to collaborate with retailers in the future.

Once received, customers looking for more inspiration can scan the QR code on the label, where they will find more information about BoCa and great recipes.

While Delica and Morris have been well received in the specialty food industry, they are aware that Black women are not often elevated in the food world.

“Black women should be centered in the food industry. We have been historically on the side, front and back,” Delica says.

BoCa Flavor recently won the Black Girl Ventures crowdfunding (BGV x Manifestation Babe Pitch Competition), which provides resources and exposure for small businesses and helped increase brand awareness. From there, the duo has appeared on the indie blog Crown and in VoyageATL magazine.

A part of BoCa’s mission is zero carbon emissions and working with grassroots farmers who receive a living wage. While they currently have a main supplier, they hope to further their relationship with the farmers who grow the ingredients for BoCa.

They also partner with local food and education-based organizations and charities to provide resources to those in the community and donate a portion of their sales to the cause Race for Hunger and give customers a chance to do the same.

“We want to ensure we are partnering with other businesses that align with our vision and mission,” Morris says.

“Men anpil chay pa lou,” they write on a social media post.  It is a Haitian proverb that translates  to “with many hands the work is light.”

Off to an amazing start, the founders of BoCa Flavor are excited to share a part of their culture and themselves through healthy savory flavors and a nostalgic taste. Not just your occasional spice, Morris says, “BoCa is good enough for the everyday. Our product showcases the depth of the Caribbean flavor profile.”

There is always a story to tell with food. Jessica calls these flavor memories. These experiences remind her of traveling abroad, relatives, and childhood. She learned to cook by watching and tasting. She enjoys trying new recipes and believes healthy food options should be accessible. Follow her on Instagram @jessplateit.