Sistas Doing it for Themselves and Their Communities 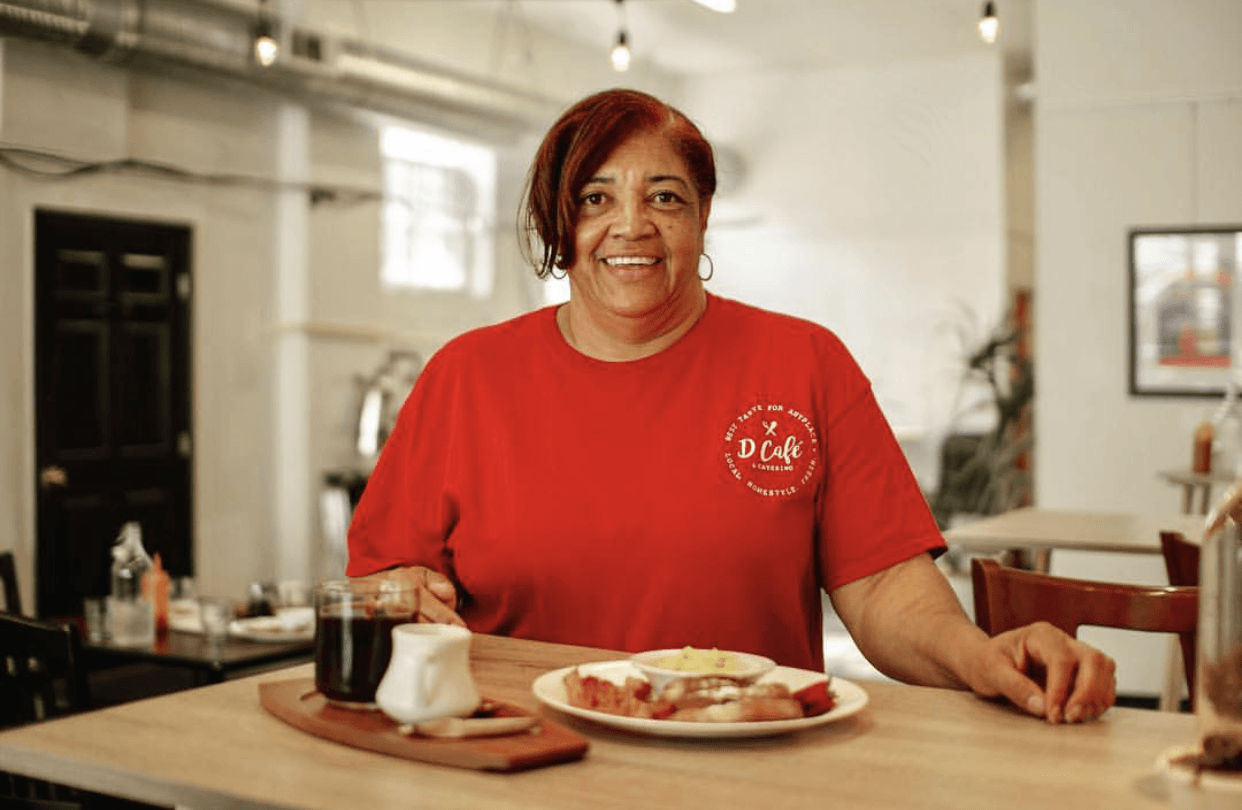 While Washington, D.C. is known as “Chocolate City” and Atlanta as “The Black Mecca,” it’s no surprise that there are a wealth of Black-owned restaurants in both cities. Like so many, these two restaurant owners are not only increasing the wealth of their businesses but are also helping to bring health and wealth to their communities.


While still in grade school, Sunyatta Amen trained as a fifth-generation master herbalist at her parents’ restaurant, Pyramid Tea & Herbal, which opened two doors from Harlem’s famous Apollo Theatre in 1976. She later became doctor Amen as a trained naturopath, who learned the medicinal value of teas, spices, and foods.  She opened Calabash in 2015 to carry on the tradition of her Syrian-Jamaican and Cuban roots.

“We strive to connect modern people to ancient ways. And to teach people to use food as medicine. In Native American and African traditions, you can’t be a master of something if you don’t create more masters, so we offer cooking and herbal identification classes to the community,” says Amen. She wants to help Americans get away from the daily routine of pumping themselves up with coffee in the morning and bringing themselves down in the evening with alcohol. “Our matcha tea is popular as a great coffee replacement and our tea called My Last Good Nerve nourishes, soothes and calms your nervous system without making you sleepy and is a great stress and anxiety reliever. And our teas and tonics have even helped women’s fibroids to shrink,” says Amen.

Calabash was recently named Best Coffee Shop in D.C. by USA Today, but the food is also drawing crowds, even non-vegans. “Our vegan BLT is a favorite and our coconut curry chickpea soup is also very popular, to the point where patrons get angry if we try to change it,” shares Amen. She’s opening a second D.C. location in May and says she’s made a sacrifice to do this work. “If we decided to just sell coffee in our shop or to even sell liquor, we could make 10 to 15 times more money. But our commitment is so strong in helping people not to rely on addictive stimulants and sedatives, that we’re willing to take that loss. We can sleep at night, knowing that we help our patrons to sleep at night.”

“As Black women, we start behind the eight ball when it comes to funding, so we have to be creative in getting the funding we need. And I suggest having at least one day off because if you have a family, you're basically going home to your ‘second shift.' There's no vacation from mommying,” Amen laughs.

Follow Amen on Instagram and be sure to stop by Calabash at 1847 7th St. NW. For tea selections, visit https://www.calabashdc.com.

After catering for years out of the kitchens of some of Atlanta’s most influential Black churches, Devotis Lee and husband Alexis decided to open their restaurant in 2013 in Atlanta's historic Westview neighborhood. “There wasn't any action happening over here and people told me I was making a mistake. We took a big risk by staying here,” says Lee, who is known by her regular patrons as “Miss D.” However, today, it's right on the trendy Atlanta BeltLine path where patrons can walk or bike right to her front door. This unassuming restaurant is known by neighborhood diners for its warm hospitality, where they greet you by name.

“I’m a people person, so I love hospitality and seeing the smiles on our patrons’ faces,” says Lee. Also, she gives back to the community by hiring neighborhood kids, students from the Atlanta University Center colleges, and ex-offenders who need a second chance in life. The restaurant recently expanded to provide event space for catering and a delicious Sunday brunch with popular comfort food such as shrimp and grits, chicken and waffles, salmon patties, and their slow-cooked brisket. Lee shares, “I’ve made it through many challenges of being a woman restaurant owner and now I’m learning all of the doors that can be opened to me in this business. Like our cafe was recently used for a scene in a movie with Mary J. Blige. And we served 3,000 pieces of fried chicken on a stick, with rave reviews, at NFL Commissioner Roger Goodell’s VIP party during the Super Bowl.”

“You have to continue to follow your heart and pray. And know whether you need to quit or keep going. I’m 60-something and if I didn’t go ahead and open in 2013, it probably would have never happened. I also took many classes to learn more about owning a restaurant. Finally, Black women can be very critical of each other, so we need to start encouraging each other more.”