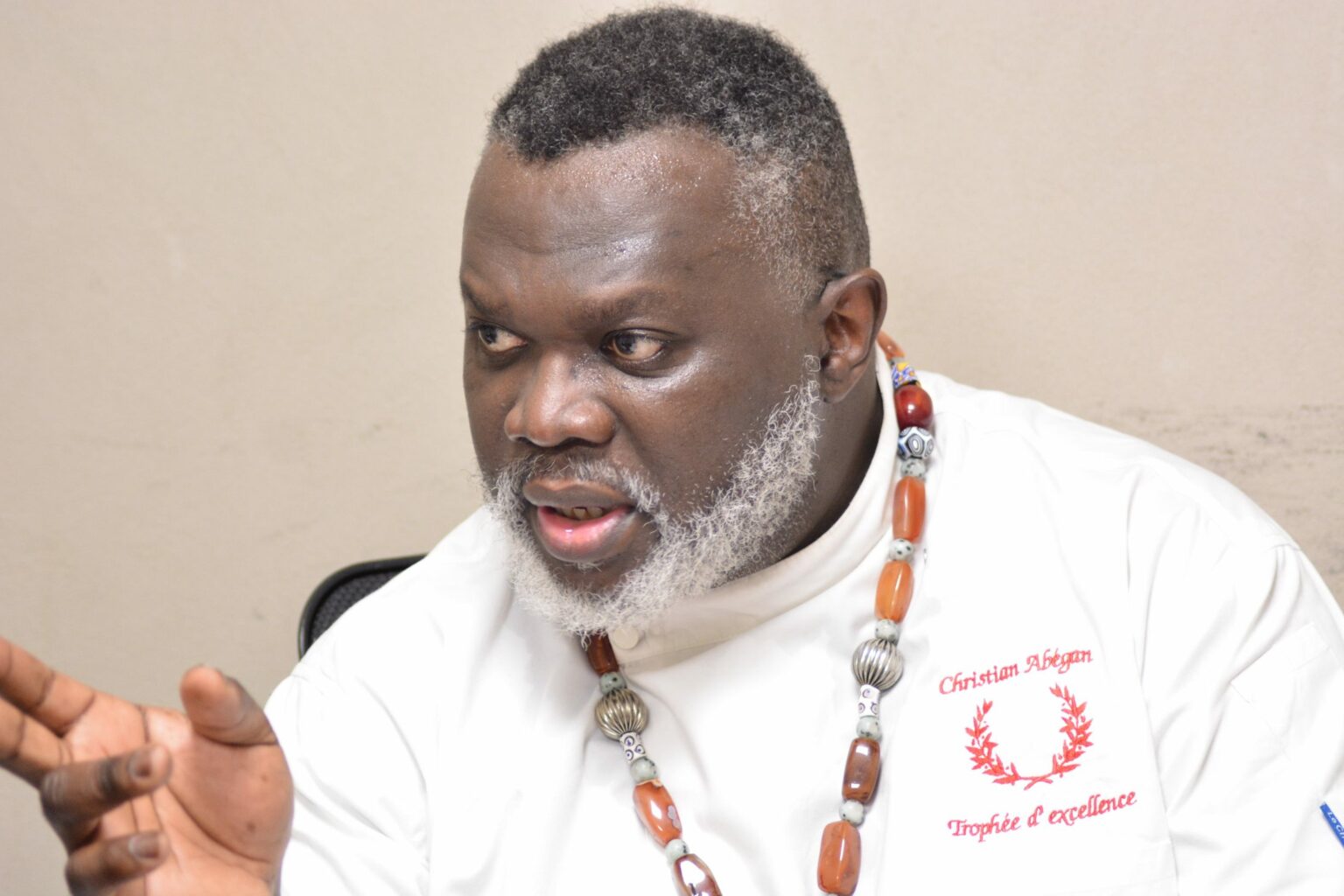 Brings attention to food security and malnutrition issues in Africa.

For Cameroonian chef Christian Abegan, shining the light on African food culture and heritage has always been his calling. Since his entry into the culinary world, his efforts have focused on a deep dive into the continent's history and sharing his expertise with as many as possible.

The Le Cordon Bleu alumni not only experienced success with his restaurants in Cameroon and France but also trains chefs around the world in African cuisine. He was recognized in 2009 by the Comité National de Prestige Paris, winning the trophy for Excellence in Afro-Caribbean Cuisine. A few years later, he joined the TV show “Star Chef” as head of the jury, making him a well-known face in many African countries.

His efforts over the years to educate about a healthy diet and responsible consumption have also led to his participation in the United Nations World Food Programme’s Fight Famine campaign.

Born in Cameroon, Chef Abegan moved to France to study French cuisine and has since traveled around Africa to share knowledge about the local culture and food heritage. “This gives me the opportunity to meet many cultures because Africa is a continent, we have a lot of influences on the food starting from Egypt,” he shares.

During his time at Le Cordon Bleu, he would try to apply his own iterations— from his knowledge of African ingredients and spices—to French recipes to create different taste profiles. “I used to transform this knowledge of French gastronomy with African products…to show people how they can have the best benefit of African histories.”

From making a West African yassa (a chicken dish) to traditional black-eyed peas, chef says, “The essence of sharing those recipes is important to me. It’s so that many people can taste the African food culture. It inspires most of the Black food culture in the world, in Brazil, West Indies, Black American food and so many other places.”

He shares his wealth of knowledge through select recipes in his book on African culinary heritage titled “La Patrimoine Culinaire Africain.” But linked to his work in the culinary world is also his concern on the topic of food insecurity in West Africa, which is worsening at an alarming rate with millions projected to need food in the next few months and children especially suffering from acute malnutrition.

Though chef has traveled widely throughout Africa, his visit to the UNWFP project in Dori, in the Sahel region of Burkina Faso—part of a special WFP campaign called Healthy Not Hungry, which aims to highlight the importance of sustainable food systems for achieving a Zero Hunger world by 2030—left a mark.

This is one of the most impoverished and most malnutrition-prone areas on the continent where the cost of food has risen regionally. Families struggle to afford nutritious food but also experience reduced frequency and quality of meals, which is particularly concerning for women and children.

Bringing His Expertise to the UNWFP

The UNWFP is the 2020 Nobel Peace Prize Laureate. They are the world’s largest humanitarian organization, saving lives in emergencies and using food assistance to build a pathway to peace, stability and prosperity for people recovering from conflict, disasters and the impact of climate change.

To help raise awareness of this crisis that although the world produces enough food to feed everyone—more than 41 million women, men and children around the globe are currently one step away from famine—UNWFP joined forces with nine world-renowned chefs and culinary artists who are lending their voice and platform to help spread awareness, mobilize empathy, and encourage action to #FightFamine.

Chef Abegan is one of those chefs who is lending his time and efforts to the campaign. And though his visit was to prepare lunch for a few hundred children in Dori, the experience left an impression, enough for him to find the time to be more involved in this Herculean task that the organization is undertaking on the continent and around the world.

“By around 2030, we are hoping to have enough food for the whole planet if we just have another awakening about how we can use all of this food, how we can treat the environment and ourselves…we have to think differently, propose alternatives not just for the food in Africa but also the rest of the world,” says Abegan.

Among the food alternatives in West Africa, he speaks highly of fonio, a cereal found commonly in the region that is tasty and gluten-free.  Nutrient-rich, drought-tolerant crops like millet and sorghum, which are very good for health, need to be introduced again in many places globally, especially in Africa where there is malnutrition and a need for such heritage grains to reduce dependence on commercially marketed food products.

At the time of this interview, Abegan was in the Democratic Republic of the Congo to train young chefs in using local products for African gastronomy. “Africa is a huge continent, so many countries, some people think of it as one continent, and that is why we have to travel,” he says.

He remembers an occasion while working with French chefs on African food culture and recipes where there seemed to be a misconception that there is no cheese produced in Africa. “We have milk in Kenya, in South Africa, we have wonderful cheese in Goma in Congo…they have local mozzarella too,” he shares.

Because of these misconceptions of Africa and African cuisine, the chef is working to dispel these in his work. That apart, he is also launching his brand of gluten-free natural African spices later this year.

Growing up in a large family in his native country, the chef remembers the smell of the sauces and rice wafting in the house and an interest even at that young age in what was being cooked in the kitchen. His father wanted him to become a lawyer, but two years into university life in France, chef knew clearly where his interests were.

“Now I am passionate about cereals and vegetables,” he shares as he continues his work advocating for sustainable communities and food as a catalyst for development. “After 2030, we are not going to have a lot of food for the planet…WFP assists small-scale producers to have more consistent crops and know how to store them to avoid post-harvest losses. They are giving training in food processing to ensure their food is nutritious. For those who produce in large quantities, WFP asks them to market and work in cooperatives so that manufacturers can produce nutritious food.”

But there is still more to be done. He makes a genuine plea for people to address malnutrition as it concerns everyone. With some tough but true words on the urgent need of the hour, he says, “We need a sense of hope…we are gifted to have a daily meal, but it’s not happening for all people in the world.”