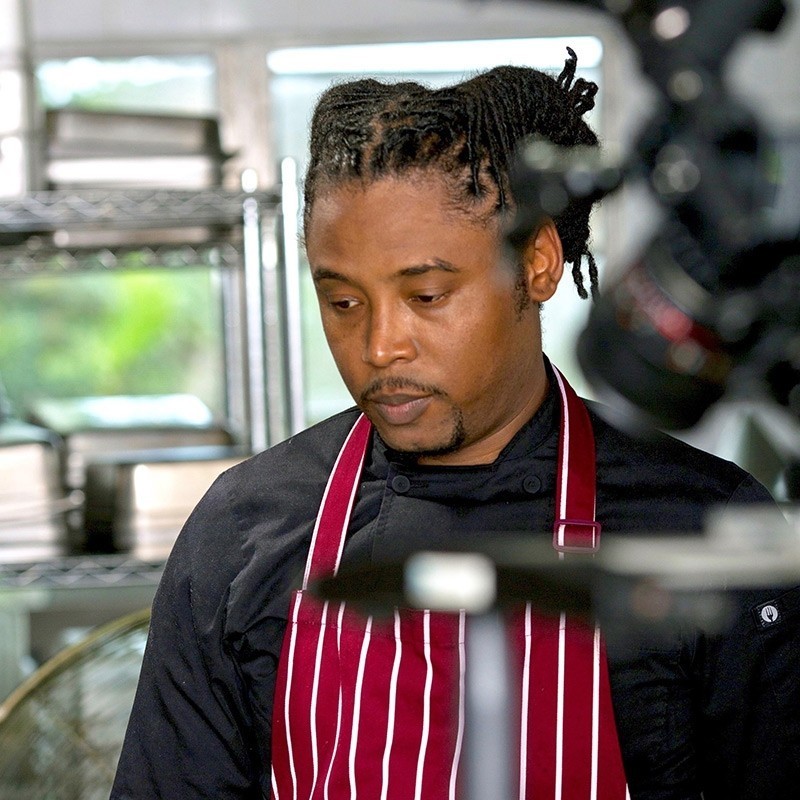 “When I need to describe my food to people it’s very hard to do that without showing them,” says chef Jason Howard. Take a look at his Instagram page and you can see why. Howard uses the app to share pictures of his Caribbean creations which are unlike any West Indian dishes you’ve seen before. Fans of West Indian cooking will find classic ingredients such as Scotch bonnet peppers and coconut in Howard’s dishes but they’re almost unrecognizable. Howard’s interpretation of salmon, cabbage and crab turns into a composition with a piece of pink salmon coated with a bright purple dusting of dehydrated red cabbage on top of an electric orange Scotch bonnet crab salad and green parsley oil. Even a simple black coconut dessert with apple becomes a pool of jet black puree next to pale, rose apple ice cream. “I’m taking my time and looking at Caribbean food from different angles,” Howard says.

RELATED: Four Caribbean Chefs Describe Food in Their Own Terms

Howard is the chef behind 50 Years BIM, a pop-up dinner series in London celebrating Barbados’ 50th year of independence, and was a semifinalist on MasterChef UK. He’s also one of the most visible Caribbean chefs on social media with 127,000 followers on Instagram who like and comment on his photos. In 2017, he’ll be hosting a series of dinners in the United States to introduce diners to his take on the dishes and flavors of the Caribbean.

The Perfect Mix of Influences

Howard grew up in Barbados and says that while the island acts as inspiration, he doesn’t limit himself when it comes to his cooking. “I cook Caribbean food,” he explains. “It would be very foolish of me to say I only do Barbadian cuisine because the Caribbean has so many beautiful dishes to draw inspiration from.” He takes inspiration from many different islands when conceptualizing his dishes. “If I can take Barbadian flair and put a spin on a dish from Guyana or Trinidad, I’m going to do that.” His goal is to get people to think about Caribbean cuisine and what it can be, but little a differently. “People think it’s only spicy flavors in the Caribbean and that’s not true,” Howard continues. “The region has so much history and so many different flavors.” Caribbean cuisine is a mix of African, Indian, Asian and European influences and that lends itself well to chef Howard’s interpretations of the cuisine. “The French came to the Caribbean and left ingredients, even the Chinese came to the islands at one point. You see curry from India in the food. It’s the original fusion cuisine.” He uses the different techniques and colorful plating to give diners the visual aspect of the Caribbean. “When you think of the islands, you think of the beach, you think of Carnival. When you see those scenes, you just feel warm inside and the plate should do that to you too.”

The pop-up dinners have been a long time coming and a culmination of a desire to fill a need that Howard saw in the dining landscape. Howard says, “When I was working in Michelin-starred restaurants, I remember thinking, ‘Why is there no fine dining Michelin-starred Caribbean restaurant?’”  While working for some of the biggest chefs in London, he longed to experiment with the flavors and ingredients of the Caribbean. “I did my research and a friend said to me, ‘The trend is vacant.’ That really struck a chord with me.” The idea that a cuisine as vibrant and interesting as Caribbean cuisine could be ‘vacant’ of updated, fine dining interpretations left Howard feeling as though there was a void and a chef needed to step in and make it happen. “I couldn’t stop thinking about it, so that same friend eventually said to me, ‘Don’t ask or wait for anyone to do it, just go for it.’” Howard started making the dishes that he wanted to see and sharing his work online.

Exposing diners to food beyond the simple jerk chicken or roti has been an uphill battle. “Most people, they don’t know anything about Caribbean food,” he says with a laugh. “I say I’m a Caribbean chef and they say, ‘Oh, I love jerk chicken.’” People just don’t think that it can be refined or worse, they think that there’s nothing to explore within the cuisine. “The market is saturated with simple, Caribbean cooking and it’s not brought to the future or modernized for people to appreciate it,” Howard explains wanting to be the one to do just that.

“Caribbean cuisine is just as valid as any other cuisine,” reminds Howard and his ultimate goal is to expose people to all of the things that Caribbean food can be and inspire others to explore it too.

RELATED: Lee’s Kitchen: A Jamaican Comfort Combo We Can Get Behind

This article was written by Korsha Wilson.