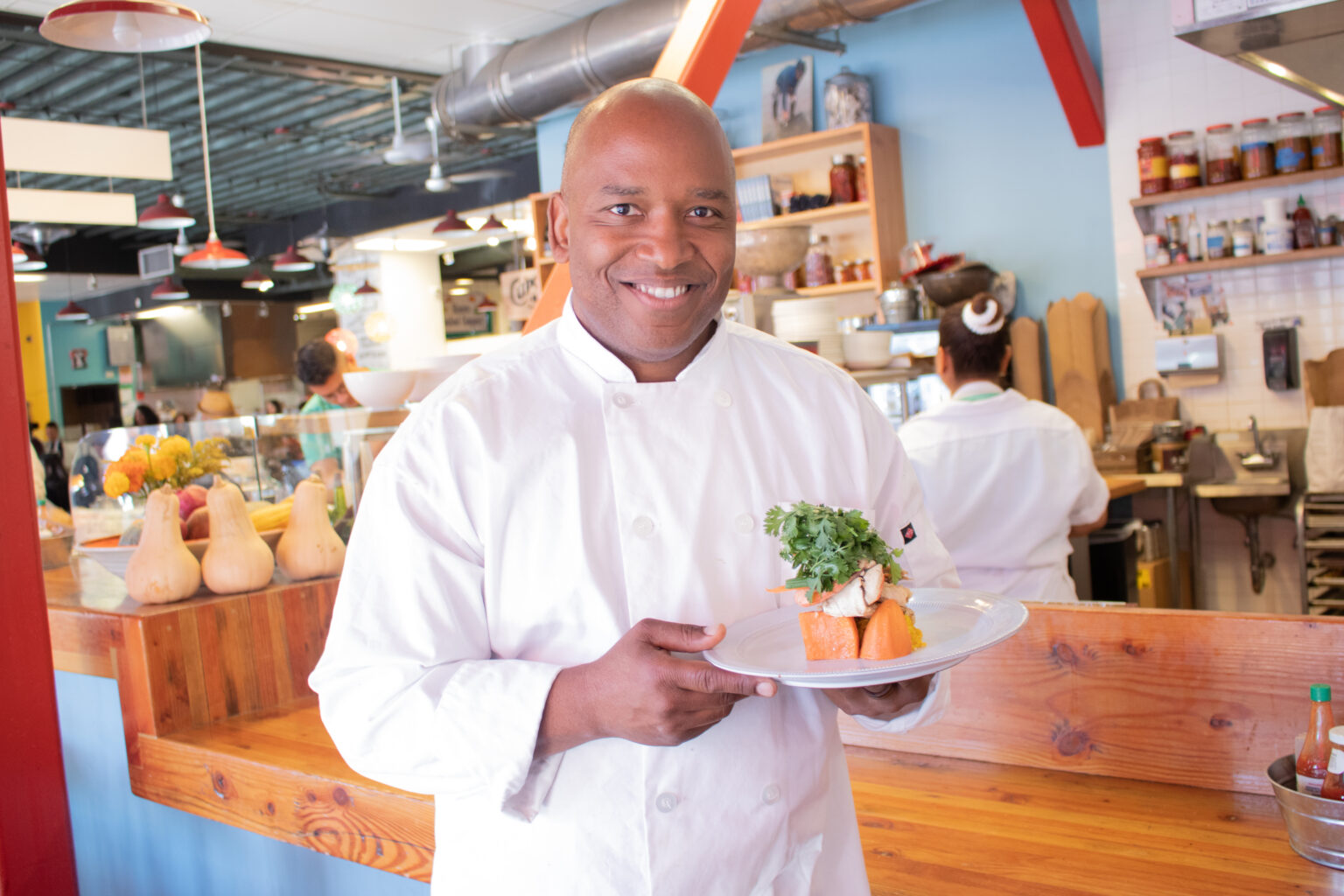 “The majority of people don’t like what they do.” That’s what chef Carl Williams’ dad told him as a child, and that statement still resonates with him today. Williams was 14-years-old when he went to work with his dad (who cleaned office buildings to support his family). Even though Williams hated going with him, he received numerous snippets of sage advice that would eventually shape his personal and professional outlook on life.

Williams, who’s originally from Texas, loved to draw and paint. He’s been an artist just about all of his life. Then one day, his father told him, “When things get hard, people don’t buy art. You need to find something people will always need.” By this time, Williams was already experimenting in the kitchen with boxed cake mix. Even though his dad was a big influence in his life, his mother had an even bigger impact. You see, his mother, grandmother and aunts were fantastic cooks. Their food had an amazing flavor that was mainly accredited to that cup of bacon grease that sat at the back of the stove. Williams continued to experiment in the kitchen throughout his teen years. Little did he know, he was laying the foundation for a wildly successful career.

Williams moved to Park City, Utah when he was 21 and started bussing tables at the Deer Valley Resort, where he ended up in the kitchen when the chef offered to train him. This was the beginning of his professional culinary journey.

He eventually moved on to a prestigious hotel chain in Utah, which Williams says was great in the beginning.  He became exhausted after five years of working a schedule that escalated to 80 hours, seven days a week. He worked hard to get to the top, having experience in the front and back of the house, but that also meant he’d hit a glass ceiling. Williams yearned for something greater thinking, “There has to be more to life than this.” So he quit his job to restructure and rebuild his life and his career.

“I figured I had three options: buy a restaurant, build a restaurant or get out of the business,” Williams says. What he ultimately decided to do seemed to fall outside the box. “I worked as a waiter while getting my real estate license,” Williams shares. He was in a good place with his decision saying, “I didn’t want to be under someone’s iron fist.” His parents taught him the value of hard work, so this drastic change in life didn't phase him one bit.

After successfully pivoting into real estate, the 2008 recession hit, causing him to make another pivot. Relying once again on the life lessons his parents taught him, he remembered what his dad said about finding something people will always need. Well, people always need to eat, right? Williams’ next adventure in life was an organic evolution. He started cooking privately, taking bits and pieces from his former experiences to develop the ultimate culinary experience for his clients.

Popularity by word of mouth opened doors to traveling with clients all over the world. Once again, Williams had his parents to thank. As a child, they exposed him and his brother to everything so they could develop well-rounded palettes. This exposure allowed Williams to feel right at home no matter where he was in the world. It also birthed what the chef/real estate agent calls The Carl Williams Experience, a culinary platform that allows Williams to express his creativity and demonstrate his true artistry to the world.

Williams always knew he wanted to tell a story with food, one that would remind people of their childhood. “It's how you tell someone something without verbally communicating it,” Williams says. “You must be open to hear it. I want to open people’s minds with food.” He believes people have amazing palettes. Your taste buds are where the truth lies. The truth is in the taste, and taste is a sense we have to acknowledge.

Williams goes on to say, “Slow down and enjoy the food. There’s no fun in shoving it down your throat.” It was this understanding of the direct relationship between food and taste that brought about Williams’ popularity.  Knowing how to talk to people is also imperative. “I’ve worked with many talented chefs with no people skills,” says Williams. Some simple yet powerful rules he lives by include smile, be diplomatic, speak calm words and admit when you’re wrong. “All you have to do is apologize, renegotiate and move on,” Williams points out.

I asked the popular private chef a few more questions that I hoped would reveal a little bit more about the experience clients have come to know and love.

Who is your culinary inspiration?

Both of my grandmothers, my mother and three of my aunts. My mother was a classy lady. She always left a polite and favorable impression on people.

What’s your most popular dish?

It’s one of my favorites too! What’s your favorite food?

Well, my favorite cuisine is Asian-fusion.

Ah, nice! Okay, do you have a favorite ingredient?

I’d have to say the onion. It gives so much flavor. The cooking world wouldn’t be the same without it.

What three pieces of advice you received from your parents have been the most influential for you as an entrepreneur?

That would be make eye contact, give firm handshakes and talk properly.

Get a taste of the experience for yourself by following Williams on Instagram.