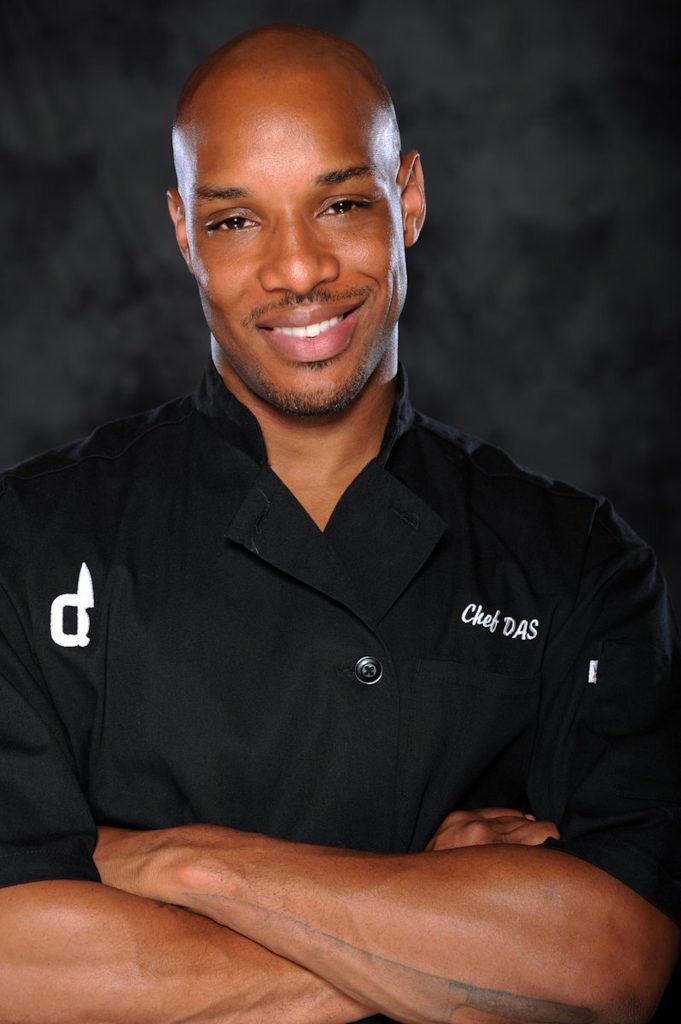 When celebrity chef and Black entrepreneur Darrell Smith, aka Chef Das, observed more people staying indoors and cooking more during the pandemic last year, his immediate yearning to help take away any intimidation in the kitchen and creating recipes at home resulted in a line of custom spice blends. A culmination of his experience as a private chef and owner of a culinary consulting company, he created Spice Sack with ease of use and affordability in mind while quarantining in Atlanta, Georgia.

As CEO of The Caring Culinary Group LLC and owner of Spice Sack, Smith has his hands full. Where one company specializes in providing food service management for schools, colleges and other venues as well as offering craft services for television productions, the other is a product line. When the pandemic hit and business slowed down with the former, the chef knew he had to move fast on the spices he planned to launch for a while now. The urgency of the pandemic simply helped usher them to fruition faster.

“I have always been interested in products. I just didn’t know what kind,” he shares. He now has five offerings under the Spice Sack brand. The first three cover all of the flavor profiles he likes to work with: Chef’s Blend is an everyday seasoning and a kitchen staple; French Toast brings in the sweetness and Seafood Splash works for all seafood dishes. Living in California before relocating back to Georgia, it is only natural to express his love for tacos with a Taco blend, followed by Margarita Salt, both newly added to the line. Each is reasonably priced, and Smith also offers a five-pack combo if you’d like to try them all. “It has to be affordable to reach the people that I want to reach,” says Smith. “It takes the intimidation out of it so people can afford the product and feel like it’s for everyday people interested in being a better cook in the kitchen. That helps ease the tension a little bit while cooking.”

And he would know having been an educator in a previous life while teaching the first-ever culinary program at Beverly Hills High School.

An Educator and Advocate

That program was the school’s the most requested after school elective for five years. Inspired by his time teaching, Smith also wrote a cookbook called, “Now Look Who’s Cooking,” a culinary lifestyle guide covering the basics such as how you hold a knife, what does julienne mean, and so on.

“It was a big deal because it changed who I was as a professional,” says Smith. “I had students who didn’t know what they wanted to do in the future and realized they loved cooking. It opened their eyes to a different trade and different business mentality.”

Born and raised in Michigan, Smith originally studied business at Morris Brown College, but later transferred to culinary school at Atlanta Technical College. Hailing from a large family, he saw food bring people together, and with both parents being good cooks, it was natural he showed interest in the culinary world.

After specializing in American cuisine and working a few jobs in Michigan, he moved to California where he worked as a private chef with a slew of celebrities, including the late Kobe Bryant, Michele Obama and actor Samuel L. Jackson.

Rapper Sean Combs was his client for a few years. “I lived and worked with him, have known him for probably nine years, watched his kids grow up,” shares Smith. “I learned a lot about business and products. That was going to business school in itself…it was a big springboard as far as where the trajectory of my career took me. I traveled the world with him, and he opened my eyes to a whole new lifestyle and way to live. It changed the business standards and acumen that I have as far as my drive and ambition.”

You may probably recognize the chef from two Food Network shows. He was on “The Next Food Network Star,” which was his first time on TV, and “The Great Food Truck Race,” which resulted in him opening a food truck in Los Angeles called The Slide Show, selling gourmet sliders for three years, despite not winning the show itself. That undertaking had to be dissolved as Smith focused on other efforts. “I had a lot of different experiences within the industry, but it all comes back to business and food. That’s more so where my stars have aligned.”

Chef counts culinary celebrities such as Marcus Samuelson, Thomas Keller, Joachim Splichal and Wolfgang Puck among his role models. Being the powerhouse brands they are, he is also looking at diversifying into other product lines that align with his brand, cooking and education. Drawing inspiration from his years as an educator and advocate to ensure everyone feels comfortable in the kitchen, he hopes home cooks feel confident about whatever dish they will make using Spice Sack’s custom blends.

Noting the importance of African Americans in the culinary industry, he shares, “There’s still not a lot of us that are mainstream, so getting that support of our industry and people of color in our industry is important. There is room to grow, there is more opportunity for us…there is so much support that we are getting from bigger companies paying attention to diversifying their portfolios a little bit and letting people in so this is a really great time for us in the industry to break some doors down.”

Learn more about Chef Darrell Smith on www.chefdas.com and purchase Spice Sack on www.spicesack.com and don't forget to follow him on Instagram and Facebook for recipes, new spice releases and more.