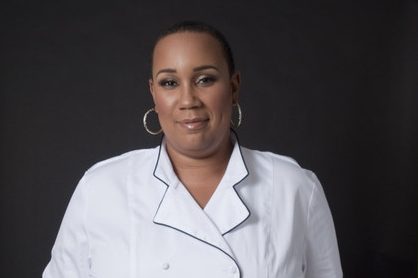 It is no secret that Harlem is home to some of the best restaurants in the country and each Monday through the end of August, black chefs from around the country will present their diverse talents and palates as part of the Black Chef Summer Series.

Joining the line-up on August 10 is chef and food stylist Elle Simone Scott. The Detroit native followed her culinary dreams to the New York five years ago and has since built an impressive resume that extends from freelancing at the Food Network, being the culinary producer for season two of Bravo’s “Chef Roblé & Co” and contributing her culinary talents to “The Chew,” “The Kate Couric Show” and The Cooking Channel.

Although New York is where Scott is making things happen, her heart is never too far away from her hometown. “Nobody reps Detroit harder than me. I am a 313 girl all day,” says Scott about representing the city during her upcoming Black Chef Series dinner. Scott is just one of several talented chefs selected to curate a culinary experience that tells their story as a chef and their journey to where they are now.

For Scott, her story starts in the city known for its musical influence and automobile production. It is a city that many say is often misunderstood but still holds on to its greatness. Prior to moving to New York, Scott worked as a social worker and would cook in restaurants at night to get rid of stress. When the agency she worked for lost its funding, she jumped at the opportunity to be in the kitchen full-time by taking a position as a chef with Norwegian Cruise Line for two years.

Anyone looking to make it in New York knows that you can’t make it off of talent alone. But with time, the right connections, the tenacity to succeed and, for Scott faith, it can happen. “I was on a culinary quest. Cooking has always been a thing for me. It is my only natural talent. I can’t sing, I can’t dance but I can always cook,” laughs Scott who arrived in New York in 2010 to attend school.

She attended a trade school that built a partnership with the Food Network. This led to a nine-month internship working in the test kitchen for the magazine as well as on the production side. Her work would be recognized and she would later be brought on a freelancer.

Along the way, Scott met celebrity chef and “The Chew” host Carla Hall who is one of her mentors. The two are working on a culinary theater production which Scott is excited about with more details to come. With an opportunity to also give back, Scott started SheChef, a mentoring program for females looking to build a career in the culinary industry. Scott works with mentees as young as high school students all the way to those who are starting their business. Through the program, they will receive hands-on experience as well as internship and job placement opportunities. In the future, Scott is looking to expand and establish chapters in other cities.

Putting what she likes to say a twist on classic dishes she grew up with, guests at her upcoming dinner are in for a little more than Detroit meets New York. “My menu will feature my gourmet soul food style but each dish will represent a neighborhood, a back story of my life growing up in Detroit. The whole menu, everything is about my life. Why I think of food the way that I think of it, the way I feel about it. Influences that I had growing up in the city,” says Scott.

Giving a preview into the night, she shares that the first course will be an amuse-bouche of a black-eyed pea beignet with Cajun powdered sugar and a black-eyed pea confit. Scott says she calls this Black Bottom named after the once predominantly black neighborhood in Detroit that was her family’s first introduction into northern living.

The second course will be matzo ball soup and pot liquor with a collard green pesto. This dish symbolizes the fusion created when Scott’s grandparents along with two other black families first integrated into a Jewish neighborhood. You’ll have to be there to find out what is on the rest of the menu.

For Scott, food is all about family, the community and the communal experience of sharing. Guests will become a part of this as they taste her story unfold. Tickets are still available for $65 and include a specialty cocktail of the evening. The Black Chef Series will be held at the BluJeen restaurant located at 2143 Frederick Douglas Blvd with seatings from 6-8 pm and 9-11 pm. To purchase tickets, click here.

The series was founded by chefs Lance Knowling and Maxcel Hardy along with Alize Beal. 15 of the proceeds from the night will go to the charity of the featured chef’s choice. For more information, visit www.blackchefseries.com.

For more information about Scott, SheChef and future projects, visit her online at www.shechef.org as well as on Instagram and Twitter.