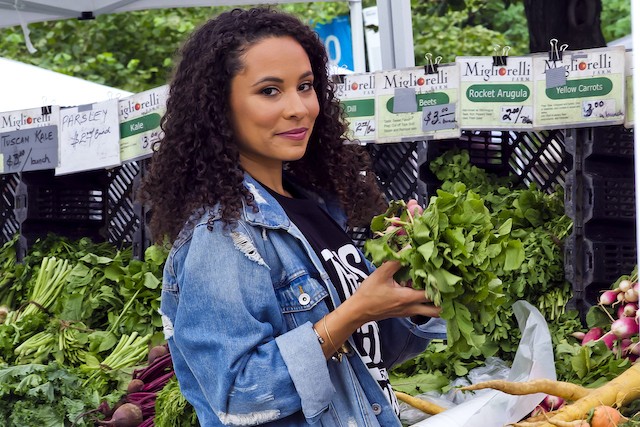 For “Chopped” champion chef Kathleen O’Brien-Price, an appearance on one of TV’s most-watched cooking shows has been one of many highlights from several ventures she has in her pot…or rather, up her sleeve. From cooking for celebrities on the West Coast to making a name for herself as a private chef on the East Coast, she cast her culinary charms on land and sea courtesy a months-long stint aboard a cruise ship. Now calling New York home and taking her myriad experiences in stride, O'Brien-Price is ready to unleash a few new projects as we roll out the old year and head into the new.

Firing up During the Pandemic

Currently, O’Brien-Price is busy with Chefleen’s Virtual Kitchen, an online cooking class with public and private options where she teaches attendees virtually. This includes many corporate clients and a couple of charity causes such as an ice cream cone cupcake class in July with proceeds benefitting the racial justice organization Color of Change, and another in September for the nonprofit organization United Way. She also hosts a live series called Real Life Cooking weekly on Instagram and Facebook where you can cook along with her to make a meal from start to finish in under one hour.

Pre-pandemic, O’Brien-Price was a private chef, but that scenario changed quickly thanks to COVID-19. Now business is slowly starting to pick up again. “I am choosing my clients carefully and making sure to follow all the safety precautions, but the virtual kitchen has been amazing,” she shares. “I am not only making food for others but also inspiring and educating them at the same time.”

The virtual classes are held once or twice a week for about a two-hour duration and limited to ten participants, so “it’s an intimate experience, people feel like they learned something and have the opportunity to ask as many questions as they need.”

This past September, O’Brien-Price organized Blackout the Park, an event to showcase Black businesses and Black joy, creating an alfresco dining experience in a secret location by curating a basket with picnic-style food for two. Black-owned businesses such as Partake Foods, Ryan Rondeno Spice Collection and Trade Street Jam, among others, were highlighted. The event was well-attended and turned into a powerful community experience made more significant by the fact that the venue was Seneca Village, the first place in New York City where the Black community owned property.

Recipe for a Chopped Champion

For avid fans of Food Network’s show “Chopped,” O’Brien-Price is a familiar face. She won the first episode of season 37, which aired in 2018 titled “Luck of the Irish.” If her name didn’t give it away already, she is Irish on her mom’s side and African American on her dad’s. Despite varied culinary influences from her lineage, she describes her cooking style as California casual, having been raised in Southern California. Her West Coast approach and treatment to ingredients that screamed Irish staples — a blood sausage taco for the appetizer round, crubeen soup for the entrée and an apple crumble for dessert – gave her the winning verdict.

O’Brien-Price moved from California to New York in 2013. She had graduated from the University of California, Berkeley, with a degree in mass communications, but the recession ensured finding a job was no easy task. She went on to Le Cordon Bleu, got her first job working as a kitchen assistant at the celebrity home of actors Will Smith and Jada Pinkett Smith — which is where she got the moniker Chefleen — and enjoyed the experience.

But a visit to New York gave her a whiff on the other side of the country. “I just fell in love from the moment I stepped into this city. I thought I need to live here someday,” she shares.

Although she had made a name for herself in California cooking for NFL players, catering events and enjoying life in the West overall, O’Brien-Price jumped on the opportunity to move East.  She has since worked on freelance projects or for clients in some form or the other, except for a few months in 2017 when she worked on a cruise ship.  “That opportunity was for America’s Test Kitchen, which is a super reputable company and I got to do cooking demos,” she shares about her time on board. But wanting to make an impact and having a fiancé waiting in New York saw her leave the job at sea.

Carving Out an Impactful Future

“I like being on camera, but mainly because of the impact that I feel I have on people because growing up, there wasn’t a ton of diversity on TV.  There was no one that cooked like me, that looked like me, so it is powerful for me to be in this position where people are able to see me,” O’Brien-Price says. Imagining any challenges during this winning streak in her career seems impossible, but she tells it differently. “The biggest challenge is self-belief. It took me a long time to even feel like I was a real chef just because I didn’t have that super ‘restaurant-y’ background, so that was depressing at first,” she confides.

“Winning Chopped made me feel like I am a chef.  I am good at this. I’m intuitive. I can do it.” Taking all of that in stock, O’Brien-Price is hoping 2021 offers opportunities for her virtual services to grow as people get more comfortable with the idea of socializing with strangers online.

She has also partnered with other chefs on a new venture called Multicourse where fine dining tasting menus are 90% prepped and door-delivered.  Award-winning chefs walk you through each course’s final steps via a virtual platform for an unforgettable dining experience right in the comfort of your home.

She is excited about what the future holds and admits, “The pandemic has actually helped me build my brand and my business a little bit more. If you had interviewed me five months ago, I probably would have not sounded this together. I had a lot of time to think about what I’m doing and where I’m going.”

Part of that plan includes making Blackout the Park an annual event, envisioned along the lines of the globally known white-clad dinner party, Diner en Blanc. O’Brien-Price adds, “It can be something special and magical in that way. I am looking forward to when the world makes more sense, and I can do it on a bigger level.”