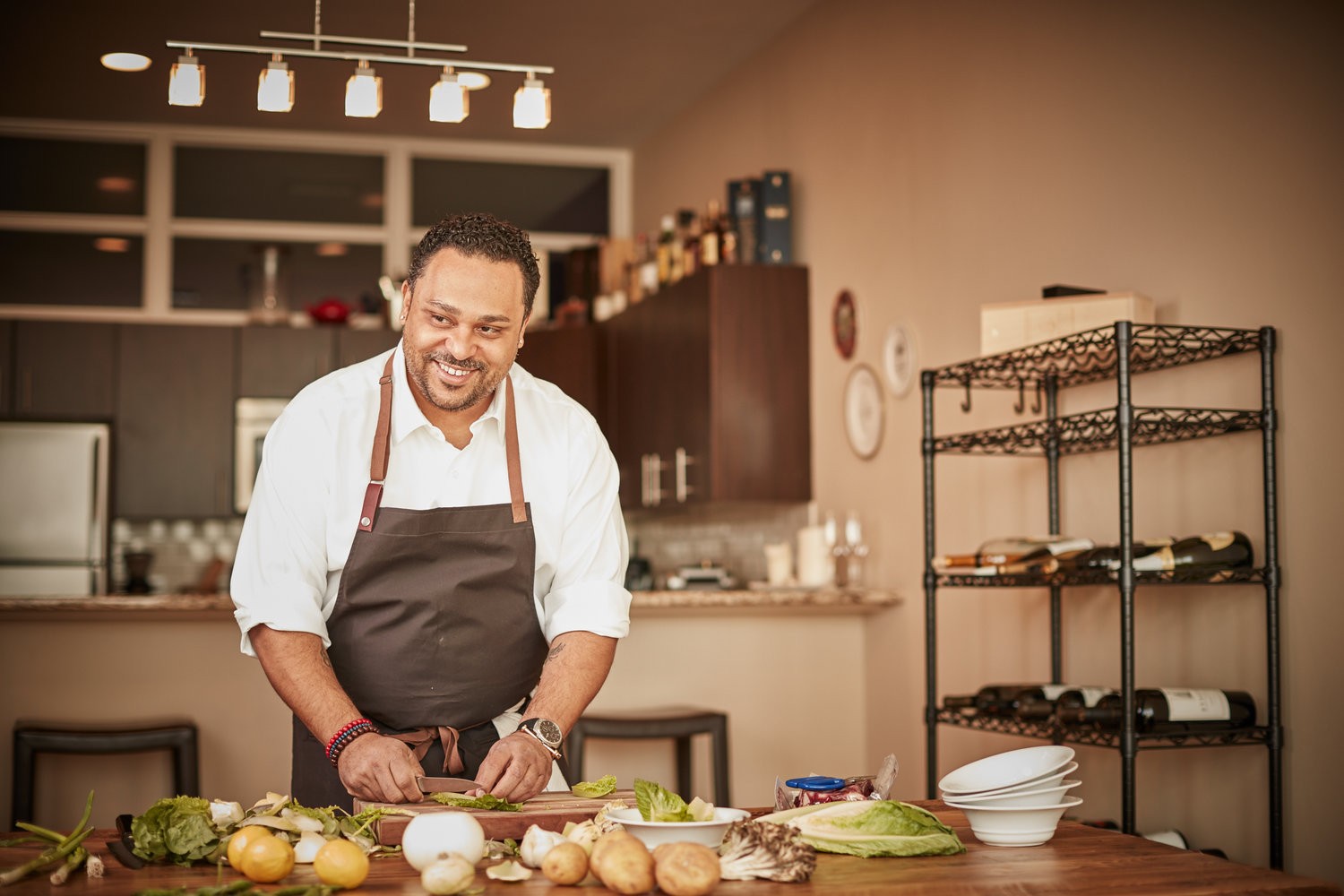 When your ambition in life is to succeed as a chef and own restaurants, the plan often requires recalibration. The founder of Sonny & Sons, a fast-casual eatery at Crave Food Hall in Purdue University’s Discovery Park, knows precisely what it means to rework a dream you have had since high school. Chef Kevin Sbraga did just that in August when he launched the restaurant named after his late father, Harvey “Sonny” Beachem.

“I really wanted to pay tribute and homage to him and the inspiration he has been all my life,” says Sbraga, principal of Sbraga Consulting. The hot chicken and southern sides on the Sonny & Sons menu are steeped in memories of his dad. The native of Willingboro, New Jersey spent many hours working in the bakeries his African-American father owned and operated over four decades. “I really took the dishes that were very popular, the ones that my father loved,” Sbraga says.

Those dishes or versions of them appeared on the menus of five restaurants Sbraga spearheaded in Philadelphia, Pennsylvania and one in Jacksonville, Florida. His critically acclaimed, fine dining Sbraga opened in 2011, the year after he gained national attention as the winner of Bravo TV’s “Top Chef.” His restaurants The Fat Ham, Little Fat Ham, Juniper Commons and Sbraga & Company followed. Despite considerable praise for the food coming out of the chef’s kitchens, all of the restaurants closed a little less than six years after his journey into building a restaurant empire started. “Cooking good food is the easy part. For me, the most difficult and challenging aspect is managing people and getting them to produce what you want them to produce,” says Sbraga.

With Sonny & Sons in Indiana, the restaurateur is taking a different approach. He wears all the hats as the founder, owner and chef. The menu celebrates the dish that fans of The Fat Ham raved about, the hot chicken. “For me, this go-round is about giving people what they are asking for, not necessarily providing what I want and then hoping that’s what they want,” Sbraga says.

The fierce competition for the dollars of Philadelphia diners might have contributed to the demise of Sbraga’s restaurants by the summer of 2017. He considers the lack of operating capital to be the biggest threat to a restaurant’s survival once it has opened. “If you are hit with hard times, if you have to make changes, if you have to pivot or adjust and you don’t have the capital to do that, there is no way that you are going to survive.”

Cutting corners on spending for marketing or investing in management infrastructure too soon can upset the delicate balance of making money in the risky restaurant business. However, Sbraga takes full responsibility for how things turned out. “I could sit here and try and put the blame on anyone and everyone else,” Sbraga says. “But the reality is that I was the only one that was involved in every operation. The only one, so it falls on me.”

Sbraga had years of experience working with top-caliber chefs such as Jose Garces and Stephen Starr and in high-end restaurants before he opened and operated his own. It was not enough. The chef readily admits he was unprepared for the demands of expanding his restaurant reach so fast. “I wasn’t a strong enough leader. I was very opportunistic and not strategic with my growth. I just don’t think I did a good enough job planning for it all,” says the restaurateur.

The demise of his restaurants in Philadelphia also taught Sbraga lessons about not grabbing every opportunity that comes his way. Some offers from investors might not be a good fit or might be too difficult to manage. “That’s a mistake. At the end of the day, I may not have invested or invested little, but my brand was at stake. My reputation was at stake.”

Betting on a Fast-Casual Concept

Chef Sbraga hates losing or admitting defeat. So, this time with Sonny & Sons, he is gambling on his ability to be “strategic and not opportunistic.” That means passing up some of the offers coming in the door so he can focus on the fast-casual model of his hot chicken restaurant open daily for lunch and dinner. “There’s no full-service. There is no alcohol or liquor component. The menu is really pared down. There are seven or eight items altogether,” Sbraga says.

The diners stopping by Stall #109 at 1265 W. State Street can order hot chicken sandwiches, tenders or wings. They can choose the degree of peppery heat and select sides that include mac and cheese, collard greens, crispy potatoes and coleslaw. The half a bird order comes with a choice of sides. While Sbraga misses the intensity of full-service cooking, he appreciates the fast-casual concept for being less expensive and more fun. “Having someone come up for a hot chicken sandwich on a Wednesday and then come back on a Friday is pretty awesome.”

The repeat customers Sbraga sees are fans of the recipe created during the menu development phase of The Fat Ham. The chef’s trips to Bolton’s Spicy Chicken & Fish in Nashville inspired him to take several members of his staff on a food tour of the South. His former chef de cuisine Aaron Gottesman and sous chef Gabe Alcaraz came back with ideas for hot chicken and other dishes they developed under Sbraga’s supervision. “I would love to be able to work with a lot of the team again. We had a special thing. We enjoyed working with each other. We had a good time.”

Gottesman and Alcaraz have moved on to other positions. Managing director Vanessa Beahn is the only person to join Sbraga from his previous staff in Philadelphia. The success of Sonny & Sons could determine whether he gets a chance to work with some of his other team members again. Right now, his priority is attracting the students, faculty and professionals to his eatery in Crave Food Hall. The dining facility at Purdue’s Discovery Park appealed to Sbraga because of its chef-driven approach to feeding thousands of hungry people looking for unique, quality food choices.

The food hall is part of an exploding trend across the U.S. Globe Street declared 2019 as “The Year of the Food Hall.” An article from Mile High CRE, an online source for commercial development news, quotes research on the growth of food halls from Cushman & Wakefield. The brokerage firm predicts the number of food halls nationwide will grow from approximately 120 projects in 2016 to 450 by 2020.

Sbraga likes the options food halls offer, especially to groups of people who want to eat out together, dine on different cuisines and even share their choices. “It’s all about the food. It’s all about the environment. It’s all about what is happening in there. I think chefs are really embracing that and running with it,” Sbraga says.

The Sonny & Sons founder took a leave of absence from his MBA studies at Drexel University to take advantage of the trend. And while he doubts having that degree would have saved his other restaurants, he is applying what he learned from the experience. Being a better leader and manager is part of his recalibrated plan for success. “I’m probably going to demand a little bit more from people this go-round as well, and hold people a little more accountable,” says Sbraga. “I don’t ever want to be put in the position I was in two years ago.”

The chef is taking it one step at a time and making sure he is going at his own pace. He wants to build the Sonny & Sons brand with people who are committed to the same goals. “I want to create a great product, a great experience for the people and a great place for people to work. I would love to see Sonny & Sons grow to 20 units over the next five to eight years.”

Why gamble on what he still considers is a risky undertaking? Because Sbraga has never lost the love of food and cooking nourished in his Italian-American mother’s kitchen and his father’s bakeries. “I can’t think of a time that food has disappointed me. I don’t think it has or that it does,” says the chef. “The opportunity to share with other people the passion that God has given me for cooking, I feel responsible. I feel compelled to share that. I just do.”

Perhaps a quote from the late New York Times best-selling author Dr. Wayne W. Dyer can serve as encouragement for Sbraga and others pursuing the high-wire act of becoming restaurateurs. In his book, “You Are What You Think: 365 Meditations on Extraordinary Living,” the renowned self-development guru says, “The greater danger is not that your hopes are too high and you fail to reach them; it’s that they’re too low and you do.”