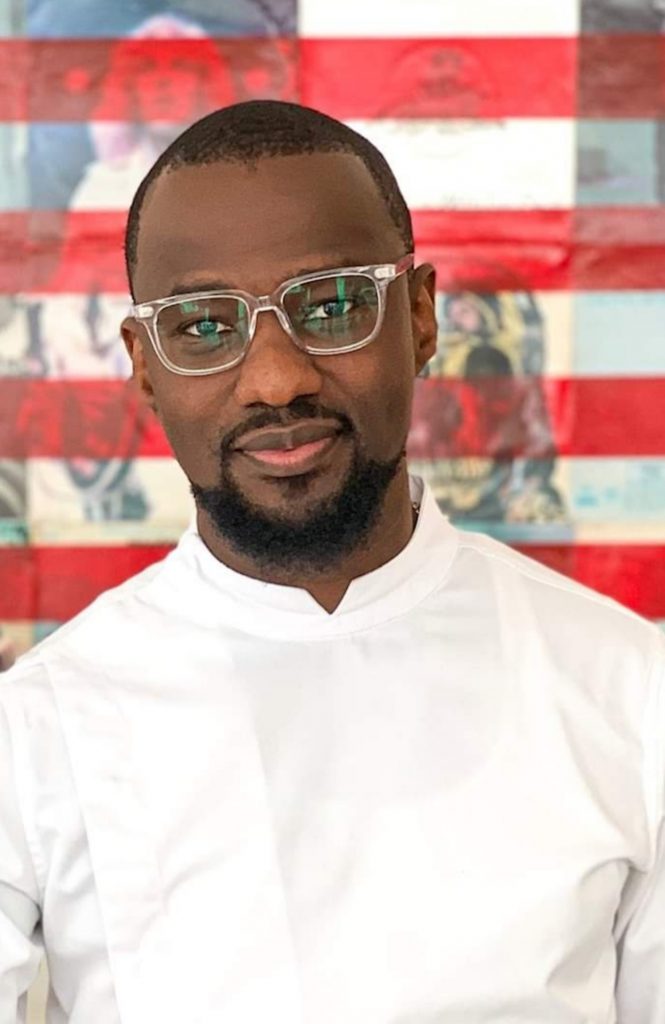 From West Africa to the East Coast, a chef focuses on an amalgamation of fine dining and herbalism.

When one door closes, another opens goes the popular adage. For Atlanta, Georgia-based chef Sosthene Kabore, that meant an end to his architecture studies and a shift to the restaurant industry. Currently, the executive chef at the prestigious Le Bilboquet located in the heart of the city, it wasn’t always his plan to be involved in the hospitality business. “Maybe it was part of my destiny. Looking back now at the path I took, I really don’t regret it,” he says. “If I had to do it again, I would have done the same thing.”

Now Kabore is aiming for more — a take on molecular gastronomy all his own, driven by a personal interest in herbalism. And he launched a fundraiser this June to help turn that dream into reality.

Kabore’s idea began taking shape five years ago, as he moved to Atlanta from New York and narrowed in on fine dining and molecular gastronomy as his focus. “I want to start a new concept of African-driven ingredients but apply it with high-end techniques,” he shares. “As an African, I don’t see a lot of African or African American chefs that have the audacity to do that, but coming from that background, I felt like there are a lot of exotic ingredients that we can utilize with the modern techniques we have.” Another factor driving this effort is his yearning to create a new work culture where the restaurant industry respects its workforce. He is also motivated to give back to his home country and people who don’t have the opportunities he has had in his career.

Plans include building schools in villages where there are none and digging wells where water is a scarcity. “I hate to ask, but after COVID, I realized that I have big dreams for back home and to help my community, but I cannot do that on a paycheck,” he says about the fundraiser. Kabore distributed a press release announcing the initiative and plans a more personal approach connecting with clients at an individual level to ensure he reaches or exceeds his fundraising goals. “My passion is molecular gastronomy, that’s what I want to do if I have the means to do it,” he shares. “I enjoy creating recipes and techniques. I like the artistic part like colors and flavors and the creative side.”

Carving His Own Path

With his family originally from Burkina Faso in West Africa, Kabore was born in the Ivory Coast and raised partly in Niger before moving back to calling Burkina Faso home. He left home as a 23-year-old student to study architecture at Arizona State University in the United States. He soon found he couldn’t afford his tuition or earn a scholarship. He moved to New York and slept on a friend’s couch for a while. Plan B it was diving into his culinary interests. But language posed a challenge and that was a huge barrier professionally, leading to him resorting to a number of other small jobs just to pay bills, including washing dishes and pizza making. “But two years later, when I was finally able to speak English, that’s where the doors also started to open for me,” he shares.

That included a chance to participate in the 2013 Mr. Africa pageant, which he won. It granted him an opportunity to go to the White House and the United Nations. But the culinary calling was strong. “It was an uncertain journey,” Kabore says. He discovered his dormant passion for professional cooking during this time. “I like the vibes of that environment, of people cooking professionally. I think that’s where the epiphany started.” As a child, he was always in the kitchen with his mother, who traveled to Europe often on missionary work. She would cook French dishes at home, which set the standards for his taste and passion for cooking. “When I came to the U.S., it was easier for me to navigate through French cuisine,” Kabore says.

While washing dishes at a restaurant in Brooklyn, a chef gave him the opportunity to work as a line cook, which set things in motion. He soon switched from restaurant to restaurant working with French, Italian, Peruvian and New Zealand chefs. After five years in New York, he was tired of the busy and stressful life and ready for a transition, which brought him to Atlanta for a sous chef role at Le Bilboquet. By the second year there, Kabore was promoted to chef de cuisine, making him responsible for a staff of roughly 30 and everything related to the kitchen.

Inspired by Herbalism and Nutrition

It may come as a surprise, though, that on the personal front, Kabore’s diet slants plant-based. At home, he enjoys kale salads, quinoa and avocado. “It happened because I have one sibling that’s alive, but I lost three others to a disease that affects mostly Black people — sickle cell anemia,” he explains. Once in the U.S., he learned about famed herbalist Dr. Sebi and his work. “I found out he was able to cure sickle cell anemia in many cases, but in Africa people say that there’s no cure. Maybe the pain of losing my siblings gave me the drive to start learning to become an herbalist myself, to take care of my family and people I love.”

Kabore studied herbalism and nutrition for two years, even taking a course in biochemistry to understand how food affects us at the molecular level. “I became passionate. I love self-study. I found that if I eat more plant-based, then I will be healthier and less sick. It changed my life.”

Taking all this knowledge in stride and his dream concept in mind, the chef continues to contribute to the excellent fare at Le Bilboquet while planning his own culinary adventure. Where he was taking orders before in his career, Kabore now is in a position where he has to delegate. “It’s a different scope. I cooked a lot before, but now I have to come [up] with the whole concept. It’s more creating than performing,” he says. As inspiration on his chosen path, he follows the work of Michelin star chefs such as Grant Achatz and Daniel Humm, Thomas Keller and Paul Bocuse, because, as he says, “That’s what I am aiming for.”