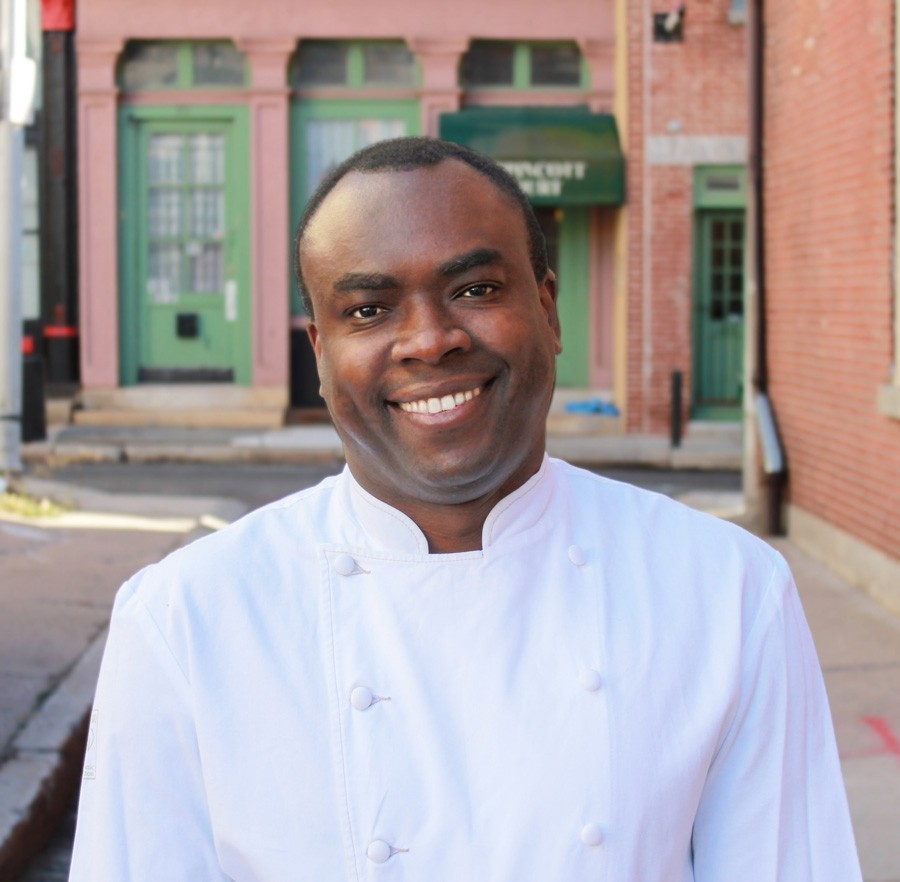 A ringing phone before sunrise signaled an end to the original plan for Maison 208 in Philadelphia. An arson fire destroyed the reconstructed building where Sylva Senat and partner Maze Hospitality were scheduled to open a new restaurant. It has taken more than two years for a new dream to rise from what remained at the location in the Washington Square West neighborhood.

“We had to start from scratch. We had to start with a new designer,” says Senat, the chef and owner of Maison 208. “We had to knock down the only thing that was remaining and build it up again.” More than two years later, a new vision awaits diners who want to experience New American cuisine prepared with French techniques and a touch of southern charm.

A Restaurant Worth Waiting For

“Maison 208 has become the restaurant we're willing to wait for, willing to spend two years redesigning and making the perfect restaurant we all want it to be,” adds Senat. The Haitian-born chef describes the new place as elegant but welcoming with buzz-worthy surprises. The retractable roof in the upstairs bar area gives patrons a glimpse at the mural that continues into the downstairs dining room. “They found a way to bring the outside inside. I think that had a lot to do with the mural artist, James Burns,” says Senat.

The muralist from Mural Arts Philadelphia lost the half-completed creation painted on an outside wall of the building at 13th and Chancellor Streets when it burned down in September 2015. That mural was not part of the original restaurant, but the new one Burns designed is an integral element of the redesigned Maison 208. “We all fell in love with the colors, and it lends itself to the type of restaurant we're opening,” says Senat.

The James Beard-nominated chef knows what he wants from what has become his “passion project” and what he calls “that one restaurant we dream of opening no matter how long it takes.” Senat started dreaming from the moment he stepped into The Sign of the Dove, a beloved New York restaurant for more than 30 years. Then a teenager living in Brooklyn, he rode the train from Coney Island to Manhattan to work in an atmosphere that inspired him to be a chef. “It was kind of like pure magic just walking into that restaurant,” explains Senat. “Every day was a new day with something to learn and something new.”

His memory of the big, beautiful restaurant that had a bakery and pastry team traveled with Senat through his internship in the Careers Through Culinary Arts Program (C-CAP) to the kitchens of some of the world's most famous chefs, including Jean George, Daniel Boulud and Marcus Samuelsson. Maison 208's owner calls his time with Samuelsson the experience that solidified his plan for how he would one day run his restaurant. “Just to see the energy and everything he did, the restaurant, the books, the staff and the camera crew,” says Senat.

The food is also starring in the production Maison 208 delivers to diners ordering from the bar's small bites and small plates or the dining room's full-course selections. Senat's time on Bravo's “Top Chef” helped him refine his ideas for the new restaurant. The episode honoring the legendary Edna Lewis inspired one dish he plans to keep on the menu. “I was very touched by the Edna Lewis tribute,” says Senat. “I made a pan-fried snapper with a vegetable broth and baby vegetables. I truly like that dish and it is definitely on the menu.”

The challenge of creating an impressive dish in 20 to 30 minutes on the reality culinary show proved to be a lot harder than he thought it would be. By the time he nearly made it to the final cook-off, the chef had gained valuable insights into the value of his Haitian cooking traditions and those Lewis inspired.  “A few of those influences hit home when it came to southern cuisine. Those little touches I plan on adding to Maison 208. Now some of the dishes are a little more southern and a little less French.”

Senat is counting on the adventurous palates of Philly's foodies to gain an appreciation for Maison 208's chef-driven concept. After all, the new restaurant represents the spirit of both Senat & Co and Maze Hospitality shaped by the pressures of beginning anew. “We can be a little experimental, but not too much. We just have to be fun and approachable. That is what we want the food and atmosphere to be.”

Maison 208 is located at 208 S. 13th Street in Philadelphia, PA. Check the website for more information about the restaurant at http://www.maison208.com.