Chefs Tips for Bringing the World into Your Kitchen 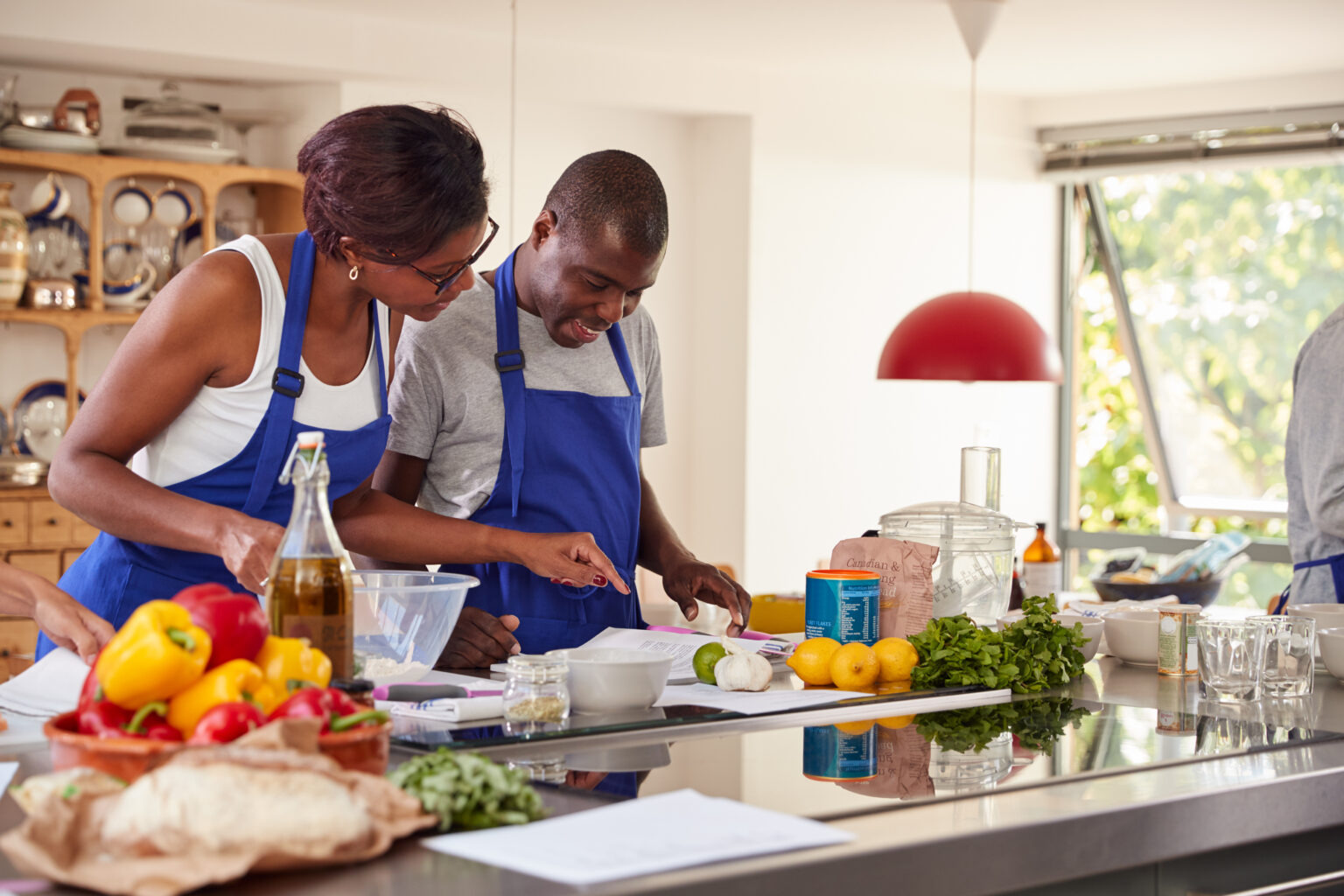 Chefs share their takes on some of your favorite global cuisines

Our recent poll asking readers which cuisines they would like to learn more about brought in some great answers.  To share how you can bring some of these requested global flavors into your home, we asked chefs we know and adore for their tips and techniques. We learned the names of some new dishes and ingredients in the process that we look forward to trying. By the end of this article, you will too.

Coming over from the Philippines as a child and growing up in a family that traveled a lot, Grant was exposed to cuisines across the country and as well as many cultures living in many small towns.

On his focus on Native American cuisine, he says, “Different regions had different ingredients available to them. They used every bit of what was available. Food became not just something to fill your belly; it became something that was so important to the growth of the movement of these tribes.”

Essential ingredients in a Native American kitchen: Cranberries, the three sisters (corn, beans, and squash), grits and pozole.  The beans range from cranberry beans to pinto beans depending on the region. Also, wild game such as elk, buffalo, duck, turkey. And when it came to spices and herbs, you’ll find wild cinnamon, spearmint, mint, rosemary and thyme.

Popular dishes: Some kind of wild rice dish, whether that’s a stew or salad. Anything with the three sisters is definitely a staple in Native American cuisine. Basic stew like buffalo chili, elk chili, elk stew or tacos depending on how close to Mesoamerica you are. “Also, things like fry bread that’s a staple of Native American cuisine, but given to them when things were taken from them, which is a whole another historical conversation.”

Common techniques: Lots of stewing and smoking as well as preserving and drying —techniques vary from region to region and tribe to tribe. “The common misconception is people think the cuisine is fry bread and buffalo dish of some sort when it’s so much more like the seasonality of ingredients, technique, traditional reasons, why they do certain things a certain way…They figured out how to preserve for other seasons when things were not readily available. Some would say it was like a science, but it’s just tradition and the right way to live.”

Originally from Ivory Coast, she began her professional journey growing up in the hospitality world as a youngster in the presence of her father, who was a chef and a mother who was a keen pastry maker. Despite going to business school and working in the corporate world, she eventually gave in to her passion earning a culinary school certificate, working as a private chef in Paris and working in catering companies and fine dining restaurants.

Currently in London, she hosts Afro-fusion dinner experiences. “I want the world to know about African gastronomy in another way by putting my twist and my French culinary techniques. I am coming from West Africa, but doing Pan African food.” This year, she also started a delivery service called Naeli, which offers food delivery around the city.

Essential ingredients: Attieke is a cassava couscous found in the Ivory Coast served as a side and eaten like rice. For herbs and spices, there’s Cameroonian djansang that looks like a chickpea and is very fragrant and tangy.  It is added to stews and great as a marinade for fish, meat and even veggies. The others are Madagascar pepper, suya spice and bissap or hibiscus flower. She also loves lavender, dill and marjoram as well as cooking with red wine.

Popular dishes: One is a dessert she makes — a tart made with bissap and whipped chocolate ganache. Another is chicken baobab where she uses a powder to make a baobab reduction sauce. The roasted chicken thigh is paired with attieke or with vegetables for an earthy and lemony taste. Popular dishes in Ivory Coast include pounded plantain fufu and attieke paired with grilled meats and veggies. The national street food is garba — deep-fried tuna, cassava couscous, attieke, red onion and scotch bonnet peppers.

Common techniques: Given her dad was a rotisseur specializing in all forms of roasts, her favorite African technique is to grill and roast as well as make stews and sauces. A European technique she likes is sous vide, which is long slow cooking that doesn’t damage the meat and leaves lots of flavors encapsulated in the package. But she is trying to see how to do it differently, “because I am very sensitive to the environment and this is using huge amounts of plastic.”

Previously featured on our site, the Amawele’s founders and twin sisters have since closed their takeout restaurant in San Francisco, California and have since launched pre-packaged heat and eat South African meals on more of a subscription and delivery model. On the menu is Cape Malay rice, Durban chicken curry, savory pies, steak and rotis. They’ve also launched a rooibos refresher as a bottled health drink that is available online and ready to scale to larger retail venues. It can be consumed hot or cold and with any kind of milk. It’s vegan, organic and caffeine-free naturally.

They are working on getting funding to formulate their curry and rice dishes recipes to be available in major grocery stores for Black African representation in American supermarkets.

Essential ingredients in a South African kitchen: A good curry powder mix. Every home has its own special curry powder blend as do the sisters. It can be mild or generic with cayenne for extra spice or regular paprika if you prefer to avoid the kick. In their curry powder they use garam, turmeric, then blend that. For herbs, they use cilantro or dhania. Other ingredients are minced garlic, tomato paste and curry leaves.

Popular dishes: Durban-style curry which is like a curry stew given Indian and British historical influences. They describe it as an English stew with Indian flavors — very thick, very starchy. They pair with roti but created their original recipe that’s a tad bit sweeter than typical roti.

When it comes to desserts, malva pudding is popular — an English sticky pudding eaten with cream. Another is Dutch koeksister, which are spiced doughnuts flavored with spices like cardamom, clove, cinnamon or allspice. Cape Malay koeksisters are the version most popular in Durban – fried sweet dough dipped in a cinnamon sugar syrup and then in coconut flakes.

They admit that people who don’t know of South African cuisine think it includes exotic meats such as antelope, crocodile or ostrich. “That’s what’s marketed in safari brochures, so they assume that’s the basic South African staple, but 90% of South Africans have never tasted antelope or ostrich egg.”

Common techniques: “The way we like to cook our curries is we like to finish it off in the oven. We start the process on [the] stovetop, sauté ingredients in the pot, then throw in the oven to finish off for 40 minutes or so. If we put potatoes in curry, we fry and half bake the potatoes so they don’t smush in the curry. When you take it out the oven, we slap on some chopped cilantro and more garlic, let it cool for five minutes and then serve.”

Originally from Burkina Faso in West Africa, Kabore arrived in the U.S. to study architecture but pivoted to the culinary world when he couldn’t afford tuition. Given the French influence in his life and seeing his mom cook during his childhood, navigating the hospitality world came easy. He worked his way up from dishwasher to chef with no formal qualifications but cherished the training received from other chefs that recognized his passion. He moved to Atlanta, Georgia in 2015 when the French restaurant Le Bilboquet opened. Within five years, he was promoted from sous chef to chef de cuisine. He is currently fundraising to establish his concept promoting African ingredients while applying high-end cooking techniques.

Essential ingredients: Lots of shallots, butter and wine — key in a French kitchen. For the reduction of sauces and for finishing salads, vinegars are important, sherry vinegar being the most used. Sorrel is elusive and expensive but integral in preparing sauces.

Popular dishes: Escargot, French onion soup and from fall to spring, either a bouillabaisse or coq au vin. His favorite to prepare is chicken breast with a classic beurre blanc sauce that has butter, cream, reduction of white wine and vinegar, shallots, thyme and bay leaf.

Common techniques: For sauces, it is based on the reduction of wine or vinegar and that makes the backbone of the sauce. It takes a very long time and involves a lot of prep the day before, which is why the French have the term “mise en place” or putting everything in its place. He shares, “French cuisine is so well structured that it’s really hard to have anything unique to a chef. Because they made it so popular and it is taught in schools, the technique is pretty much relatively the same.  That’s the part I don’t like about French cuisine is that it’s very standardized.”

Cooking since he was 13 as a way to help his mother raise six kids after his father’s death, Diouf moved from Senegal to Argentina on a professional soccer exchange in his late teens. When injured there, he decided to pursue culinary school with dreams of opening a restaurant. Upon graduation, he benefitted from local opportunities before moving to Brazil, which is where he noted the similarities in African and Brazilian food.

Meanwhile, he worked for the Soccer World Cup and the 2016 Olympic Games — two avenues where he produced his best work that he is most proud of. He started a catering company featuring Afro Brazilian cooking and continued that concept when he moved to Oakland, California in 2016 to eventually incorporate as The Damel restaurant last May.

Essential ingredients in a Brazilian kitchen: Cassava, called yucca in the U.S. and has a thousand different names in Brazil. Most popular dishes have cassava. People don’t realize even the flour they use is cassava-based. Other ingredients are palm oil and coconut milk. For herbs and spices, there’s ginger, garlic, black pepper, jalapeno, parsley and cilantro. Also, heart of palm with which they make empanadas.

Popular dishes: Brazilian cheese bread or Pao de Queijo is an easy appetizer. Also, moqueca fish stew and coconut milk stew with palm oil. Bobo (a chowder-like shrimp puree with cassava) is popular too. Acaraje is a dish he credits with starting his business. Its peas soaked overnight and pureed with garlic, ginger and onion and then deep fried. Crunchy on the outside and soft in the middle, in Africa it is eaten with tomato sauce paste as a sandwich, but in Brazil it is accompanied by vatapa, a puree with cassava, coconut milk and palm oil.

Common techniques:  A mortar and pestle is used to crush and grind ingredients. And when making rice as a base for a meal, it is cooked in a broth that’s premade for hours for the stew. Remove the meats and veggies and use the rest of the broth to steam the rice.