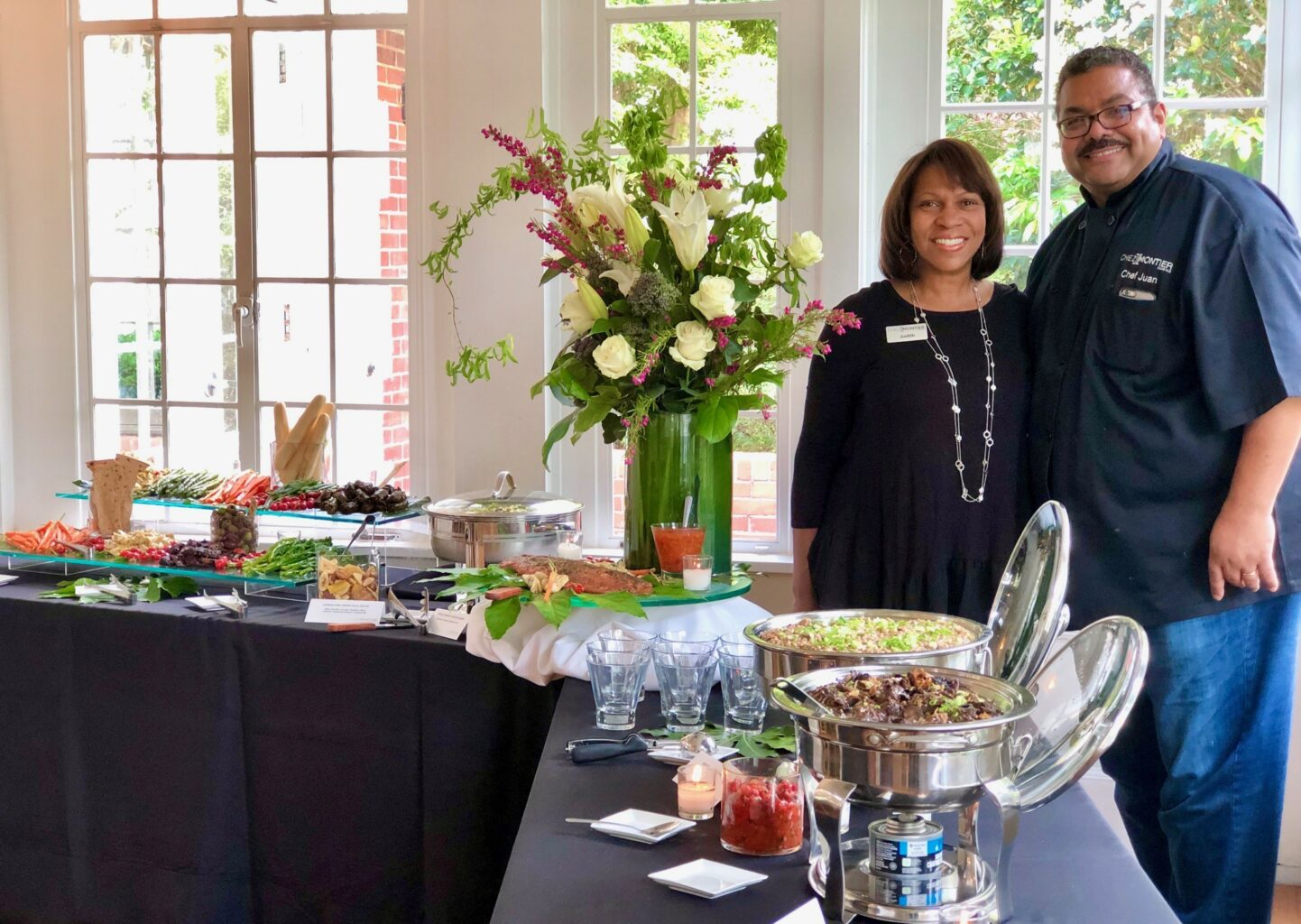 When he was a kid, chef Juan Montier’s mom would take him to his 90-year-old Aunt Prudence’s house after school to keep him out of trouble. And that’s when he fell in love. “She had me kneading bread,” remembers Juan. “And if you’ve ever kneaded bread, when you push down and get that waft of maturing yeast, it’s intoxicating. And that’s when I fell in love with cooking.”

That love affair became even stronger by the time the Shaker Heights, Ohio native went off to college at Kansas State University. “My college roommate was a food science major, and they would butcher every Thursday. And while the other kids would all go out and order pizza on Sundays, we would go into the rent-a-kitchen in the dormitory and cook dishes like duck l’orange. And we were the only two Black guys in the dorm, and it would trip the other students out, chile,” he laughs.

Juan received his degree in architecture and moved to New York, where he worked for one of the top global design firms, Gensler. But when he was tasked with designing the new Bank of America Tower in Atlanta, he fell in love again. “It was in March and Atlanta was in full regalia. I mean flowers everywhere and people in shorts, and it was fabulous. So I moved down here and I never looked back. I love Atlanta,” exclaims the chef.

It was in Atlanta where he decided to mix his love of architectural design with his love of food to start his boutique catering company, Chez Montier.

People had always told him he should start his own catering business, but first he needed to talk it over with his main love, his wife Judith, who was also wooed by his cooking.

“When I got divorced the first time, to retain custody of my then three-year-old son, I gave my first wife everything. So when I was dating Judith, I’d say, ‘Look, I can’t wine and dine you, but I can make you the most fabulous meal at my home,’” Juan chuckles. And though he is allergic to seafood, he loves making Judith his fish broth with lobster ravioli, black cod, shrimp and shaved truffles, proclaiming, “Food is my love language.”

Juan is known as a “Dinner Architect” and takes dishes that people recognize and puts a sophisticated spin on them. His unique dishes include grilled quail breast bites with apple butter, sweet plantain mash topped with jerk chicken, savory crab cheesecake bites with Panko crumble, and garnished with poached shrimp and “Dashi” deviled eggs topped with wasabi “Tobiko” caviar and shredded nori.

“That won best appetizer at the Family Food Festival,” boasts Juan. He adds, “We had a client say our bread pudding changed her life. And another client said her brother and sister were fighting over our lobster mac and cheese,” he laughs.

Their pop-up dinners are a hot ticket in town. “Cedric the Entertainer came to one of them,” boasts Judith. “Our Valentine’s Day pop-ups are very popular, and some couples have made it their annual tradition. We always have a country theme like Paris, Italy or Spain and the menu is all developed around that theme, from the cocktails to the dessert.”

Juan started Chez Montier in 2004, but it wasn’t until Judith joined him in 2016 that the business rose to the next level. She used her skills as a marketing and communications executive for nonprofits such as United Way of Metro Atlanta and The National Center for Civil and Human Rights, as well as her skills as a former executive assistant to Diana Ross, to bring organization, a marketing plan and relationship building to the business.

“I’m really about details,” declares Judith. “I like to say that Juan’s the art and I’m the science. Where he is looking at what he’s doing at the moment, I’m looking at now, next week, next month, next year.” “My Dartmouth graduate is the thinking part of our team,” boasts Juan.

Their team also includes vice president of operations Kelvin Tuitt, who is a former head of catering and beverage for the Ritz Carlton. Their son Austin, who has been cooking with his father since age three, is called their “mini sous chef.”

“I can just bust with pride having him work with us,” shares Juan. “I hire his friends, too. I work their asses off, but I treat them with respect. There are no prima donnas in my kitchen, not even me. I scrape the gum off the floor, too. I demand that they live up to the Chez Montier brand, which is absolutely fabulous all the time.”

Austin has just been accepted to Johnson and Wales University. “We’re talking to him about doing a business degree where he can specialize in restaurant management,” says Judith. But we won’t pressure him to carry on the family business. We think he’ll take what he learns and take his own business to another level.”

But are there challenges to working with family? “Hell yes,” says Juan. “It was hard at first because we each have different work styles,” admits Judith. “I’m used to working in an office and being very focused, and Juan is loud and free. One client said I am boots on the ground and Juan is balloons in the air,” she laughs.

Judith’s boots on the ground helped Juan get on television shows such as “The View” and “Sister Circle,” where his gregarious personality and humor made for great TV and more clients. In fact, 2019 was one of Chez Montier’s best years with clients like the Super Bowl and Tyler Perry Studios.

“We were brought in by Tony Conway of Legendary Events, who actually did our wedding,” says Judith. We did the food for all of the talent that performed at the grand opening of Tyler Perry Studios, like Mary J. Blige and Jennifer Hudson. The event was all that and then some. And to see people like Oprah Winfrey and Cicely Tyson coming down the red carpet was just stunning,” she remembers.

But then the pandemic happened, and everything came to a screeching halt. But the Montiers learned to pivot and become even more creative. “We had a client who wanted to have a shower for her daughter but was concerned about COVID, so I suggested we do the entire meal in a bento box,” Judith notes.

“So we coined the Chez Montier Black Bento, where we created the appetizers, entrees, staged it, put it in the boxes and dropped it off with the client, and they had a fabulous evening.” She adds, “We also had to start offering more gourmet meals for delivery, which was new for us. We created this Lux Dining Experience at home where everything is packaged, and clients can consult with Juan over the phone. He does sketches for them, and we talk about the wine and everything is delivered to them contact-free. The client sets it up themselves, turning their dining room into a fine dining restaurant.”

There are dozens of Black caterers in Atlanta, and Juan says they’re like family and learn from each other, but one of the things that makes Chez Montier stand out from the crowd is Juan’s design skills. “I never abandoned design,” he says. “I design all of the plating and all of the appetizers that I do first so that I know exactly how to put it together and what garnish and accessories are required to make them real. I also do that to be able to communicate to my team exactly how I want everything to look.”

He continues, “A picture is worth a thousand words. My team has gotten so spoiled that they won’t set up until I send them the concept sketch. I also spoil my clients with a dossier of sketches.”

Those sketches became so popular that they decided to turn them into a book paired with photos of the realization of those sketches. “Designing the Gift of Food” was made as a client premium, but it also helped get new clients as current clients boasted about having the book.  “Do you have Juan’s book? Well, you know you have to hire him,” laughs Juan.

Chez Montier has a diverse clientele, but there are times when they are treated differently as an African American business. “We’ve been in houses and environments where we would imagine that normally they would not let Black people in,” notes Juan. “And they trust us. However, there have been times when I’ve been treated like the help. And when we’re treated that way, we just charge a premium,’” he laughs.

Another issue is the questioning of their prices. “We are not a meatball and chicken wing caterer,” states Judith. “When we send a proposal to someone, they might say ‘Oh my gosh. Why does it cost so much?’ But we know they would not question why a white catering company would charge that much.”

Juan adds, “There are plenty of wealthy Black clients in Atlanta. It’s just getting them to spend the money for our level of catering. We can develop and design an entire event from bringing Earth Wind & Fire in, to having someone design jewelry for them. You get what you pay for. And we still need to get our people away from the belief that ‘white is right.’”

A Reason to Celebrate

Despite those challenges, Chez Montier continues to do what they do best, “bring a joyous celebration of food and design to everyday living.” They’ve received several awards: Judith was named a Top 100 Food & Beverage Leader by the Global Summit on All Things Food, and Chez Montier received the 2020 LUXLife Food & Drink Award for Best Gourmet Catering & Event Decor Business, South Atlantic, USA, which recognized their innovation during the pandemic.

Juan and Judith are hoping that these accolades will help get them a show on the Food Network. But for now, they’re preparing for the prolonged pandemic. “We’re in a process right now of taking a pause,” says Judith. “Our business is one of requests. People have to want and need us. So we are reevaluating what things will look like for us until we are out of this COVID environment. We’ll do small, intimate events, we’ll do Lux meals, and we’ll reassess over the next six months.”

They’ll continue to give back to the community through 100 Black Men of Atlanta’s Cooking to Survive program, Jack and Jill, The Boy Scouts, and Feed the Front Line with Emory University Hospital.

Juan concludes, “It is all about transferring my love language, and my love language is sharing food and the love of food with others. My barometer of success is making people clap and squeal when they taste my food.”