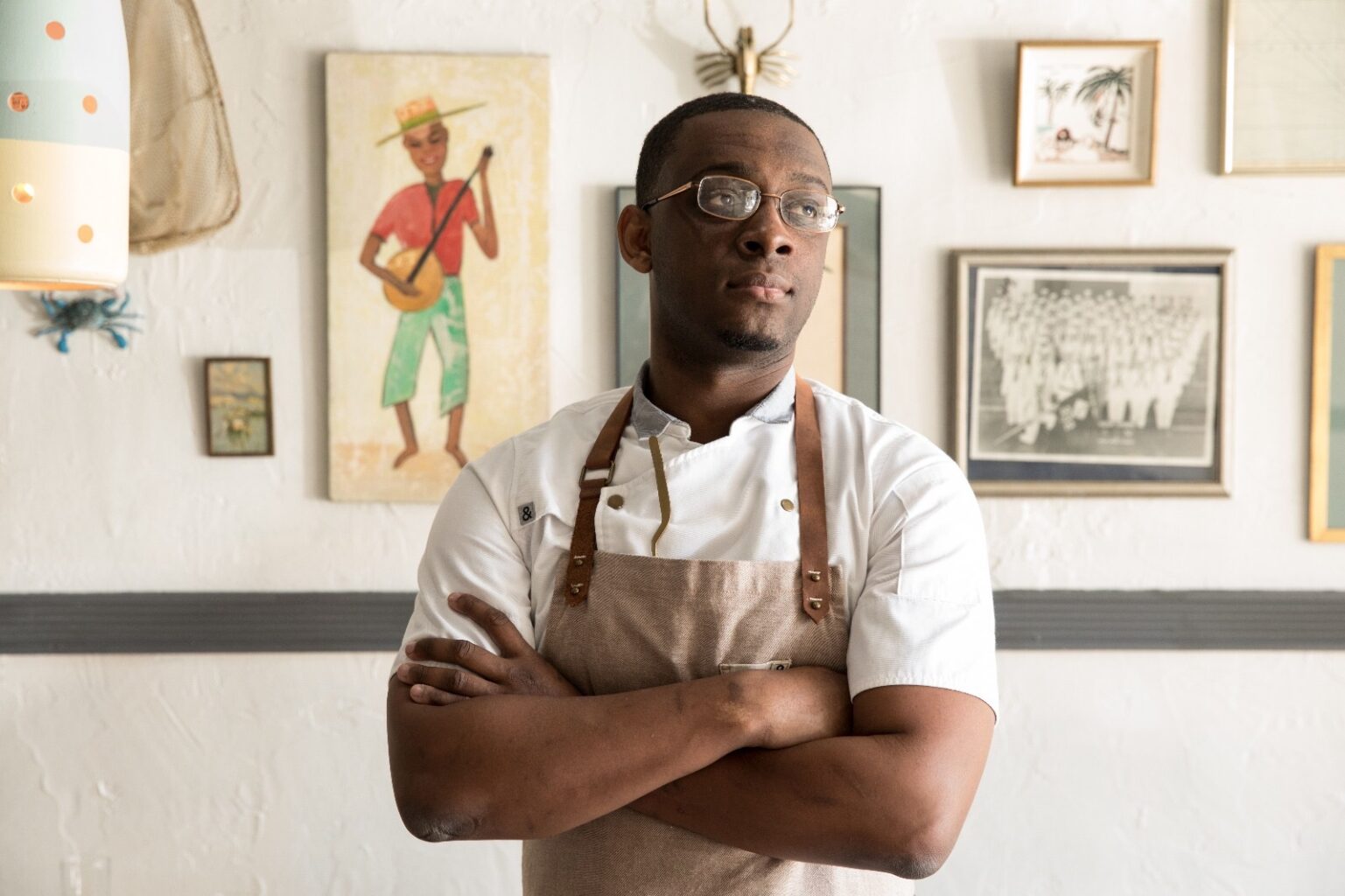 An interest in his ancestral and cultural roots and the origins of the foods he grew up eating led South Florida native and chef Cleophus Hethington to explore the world.  Before seeing an episode of “Mind of a Chef,” season two featuring Sean Brock, Hethington says he realized he didn’t know much about his family roots other than being from the South.

This particular episode narrated the story of Brock tracing the roots of ingredients he used in Southern cooking back to Senegal. It later became the catalyst for Hethington’s journey to learn and study the ingredients and foods cooked for generations in his family and other Black chefs. “That is when I really started trying to get into and understand more about the African diaspora,” he says. That was in 2014.

Over the years, between working at top restaurant establishments between Miami, Florida and Atlanta, Georgia, he would begin infusing techniques and indigenous ingredients into dishes curated for his Afro dinner series renamed to Ębí Chop Bar in 2017. The pop-ups creatively presented the African diaspora on a plate during a five-course meal. They also set the stage for the future restaurant he plans to open with the same name.

But even before the news of the country shutting down last March due to the coronavirus, a car accident two months before in January would hospitalize Hethington for six days, canceling scheduled pop-ups planned for the coming week and prompting a return to Miami.

Recovery, coupled with a devastated restaurant industry put Hethington on a new creative trajectory that took him back into the kitchen to formally create his line of spices. He introduced Triangular Traded Spices in November 2020.

It All Starts with Family

Growing up, Hethington can’t remember a time when family was gathered and food wasn’t there.  He says his mother and grandmother are “excellent cooks,” who he watched as they did catering gigs on the side.

Sundays were reserved for dinners at his grandparents, and whenever potlucks were on the family’s schedule, he jokingly remembers, “They didn’t care if my mom brings us or anybody else, but she better bring her mac and cheese.”

The culinary bug first bit him as a teenager, but sports would distract the future chef and entrepreneur from fully developing his skills in the kitchen.

The thought of culinary school after high school entered Hethington’s mind, but he instead enlisted in the U.S. Navy, where he would spend five years.  Food wasn’t far away as Hethington, then a home cook,  prepared meals for his military colleagues. “I had a knack for it [cooking],” he shares looking back. “Co-workers and friends would always really enjoy the food that I would cook and I always bragged about it too.”

After the military came a career in healthcare.  The exhaustion of working against a broken system left Hethington looking to start over, but it didn’t take long for him to know that this time it would be with food.

Started From the Bottom

Fast forward to now, and the Hethington knows exactly what the coveted industry award recognitions are all about having worked his way up from unpaid internship as a prep cook at Miami’s Yardbird  Southern Table & Bar to earning his way onto the restaurant teams of chefs Michael Schwartz and Jean-Georges Vongerichten.

Crediting his discipline, attention to detail and fortitude to his parent as well as sports, Hethington accepted every challenge in the kitchen while working his way through the ranks. Viewing the challenges (such as redoing chopped vegetables to the precise cut measurement) as annoying at first, he acknowledges that the chefs he worked with only did so to sharpen the talent they saw in him.

Stints in Atlanta would bring Hethington, who goes by Chef Ophus, to another city where culinary creativity thrives. During his downtime while working at The Optimist and later Lazy Betty, he planned for upcoming Ębí Chop Bar events, hosting the last one over a year ago in September 2019.

Coming from the Yoruba language and meaning family and hunger, Hethington named his diasporic pop-up series Ębí which was inspired by his travels throughout Africa, South America and the Caribbean. It is also fitting given the strong family influences in his life.

Ębí Chop Bar was and still is a creative channel for Hethington to combine history and culture on a plate. He shares that he starts by, “Cooking that original dish and then taking some of the techniques that I have learned working in Eurocentric kitchens and dressing it up a little bit.  I never say elevated because I think our food is well elevated.”

The events nabbed Atlanta Magazine’s honor for the city’s Best Pop-Up in 2019.

Although on a hiatus for now, Hethington looks to bring the events back in the future as well as a more permanent extension in the form of a brick and mortar restaurant.

A Spice is Born

A boom in home cooking and a desire to create a new revenue stream prompted the quiet and passionate chef to explore some of the spices he has made over the years.

“I use a lot of spices in my cooking in general. These are recipes that I have had and used in different dishes throughout the last several years,” says Hethington about his new spice line Triangular Traded Spices.

On the brand’s website is a brief history lesson Hethington refers to as “Droppin’ Knowledge.”  There he shares a little background of the spice line’s name, which centers around the events that started with The Columbian Exchange in 1492. This horrific atrocity evolved into trade routes that brought goods and weapons to Africa in exchange for enslaved African people that followed with the transporting of those enslaved to the Americas. The third part was the exportation of the goods such as tobacco, sugar, and cotton produced by the enslaved labor force to Europe.

Everything has been carefully thought out, from the name to the ingredients used handcrafted blend.  Available online for $15, Hethington says each Triangular Trade Spice blend is versatile, although there are some food pairing suggestions such as vegetables, meats or seafood visible on each jar.

“I know home cooks like guidance,“ he says as he goes into the first one which is named Resilient. For this one, cumin, mustard seed, ginger and scotch bonnet peppers add a touch of heat to vegetables, especially super greens.

Looking for a new spice for your favorite seafood dishes?  Grains of paradise, anchor, coriander, and roasted garlic give the Voyage or Viagem (in Portuguese) its savory nutty and citrusy flavor that is also great when mixed in a vinaigrette and marinade.

Hethington’s Ębí blend brings bold West Indian flavors from ingredients that include allspice, clove, cinnamon and dried rose petals.  Jamaica and jerk seasoning serve as the source of influence in this hand-mixed blend that is great for roasted and grilled meats.

There are five blends in total with Revuelta (Morocco and Egypt) and Le Courage (West Africa), completing the first launch.  Sauces will be added and introduced in the near future.

With 2021 just beginning, Hethington is staying focused and undeterred.  In addition to growing his Triangular Traded Spice brand, he hopes to return to Atlanta. Giving back to his community by preparing and providing food to those in need is also important to the 37-year-old.

2020 took away everyone's ability to safely fellowship in person. With better days ahead, travel plans for Hethington include connecting with other chefs in cities such as Charlotte and Charleston after receiving invites over the years. 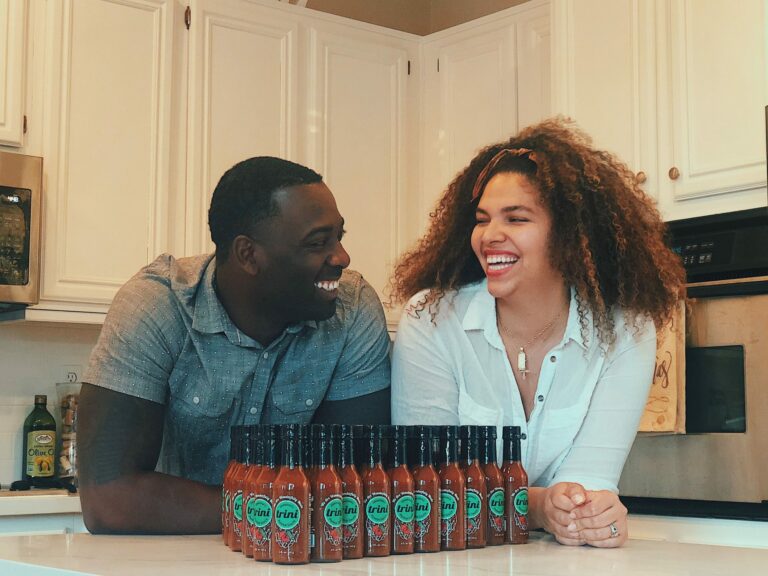