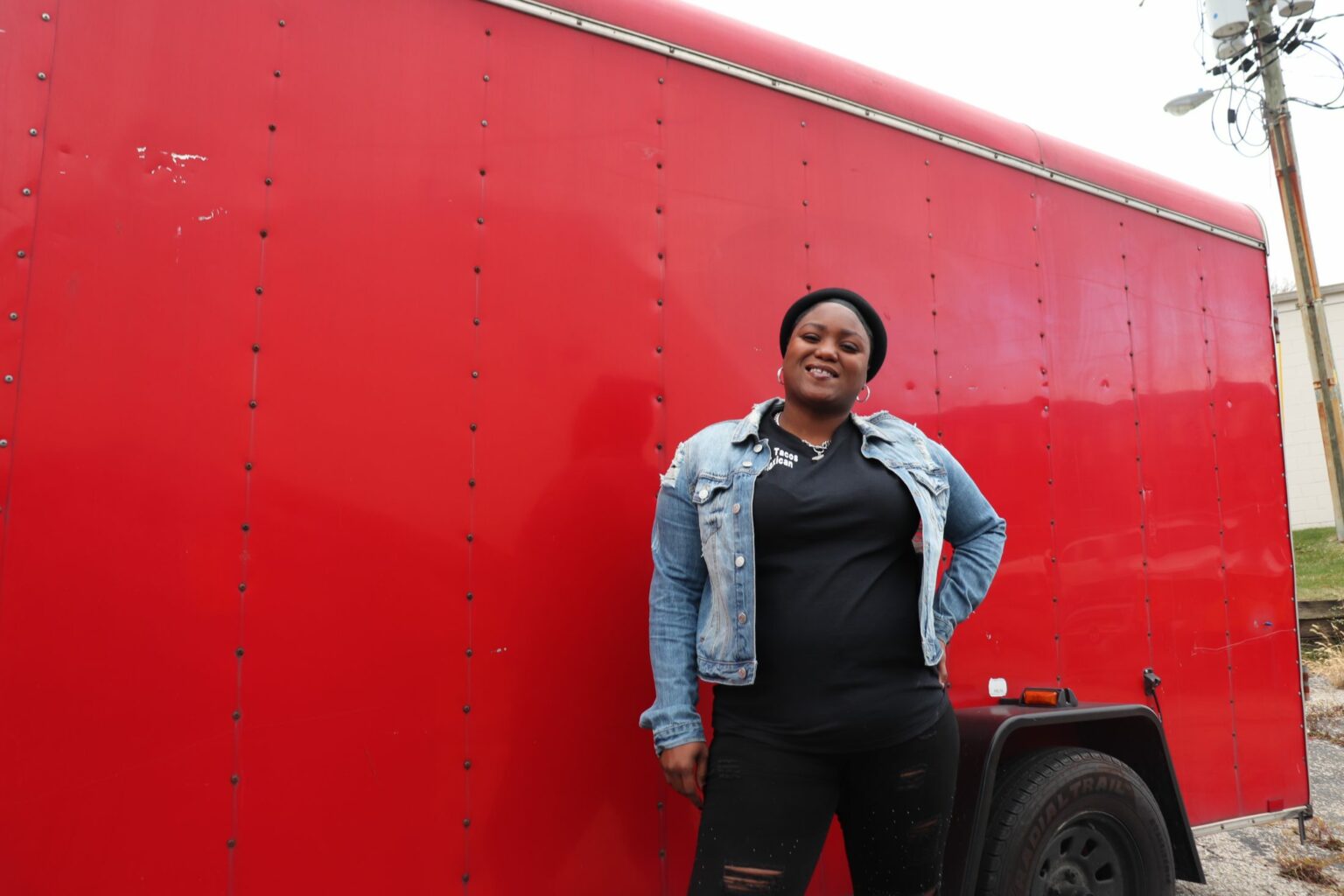 Asia-Iqui’ M. Gearon, also known on Instagram as Da Taco Ladi, has single-handedly run her own taco truck business for the last three years. “It’s all me,” she says. “I work five days a week, Wednesday through Saturday.”

Gearon is the personification of tenacity with no formal culinary training or education. It took her less than a year to get her business and taco truck up and running. “I started in a restaurant my first year in business,” she says. “Ten months into business, I purchased a used food truck with ten grand cash, fully equipped. I wanted to run both, but some personal issues occurred with the landlord at the storefront. Moved out in June 2019. By the end of June 2019, I was in the food trailer.”

Gearon, the oldest of three, was born and raised in Gary, Indiana until her mother moved them to Indianapolis when she was 16. “I have a small net family. It was mostly my mom and my siblings,” she says. “I had my great grandparents and grandparents. No cousins, really. My mom was an only child until her adulthood.”

Gearon says that she was an average child who “loved to skate, dance, and play sports,” just as much as she loved being in the kitchen “My great-grandma was the cook and baker of the family. I learned from watching her and my mom.”

Gearon first started getting into the kitchen as a baby, banging on the pots and pans. “When I was four, I used to make popsicles in the freezer. At six, I used to help my great-grandma make mashed potatoes and stir the greens.” At seven, she made fried chicken for the first time.

After graduating high school, she entered college, studying to become a pathologist. “I did that for three years,” she says. “And then life hit.”

Now a new mother, Gearon needed more income and became a dancer. “I did that for five years,” she says. “The money was good and I was still going to school part-time.” Gearon describes her work ethic as ambitious. “When I make money, I go hard. I can never sit down. I have to stay busy.”

The Indiana native says that this is because of growing up with older family members who were more conscious about money. “I come from a good family; an educated family,” she says. “My great-grandparents taught me a lot about money management, so I’m really good at saving money.”

Gearon never stopped cooking and started experimenting with tacos. “That was in 2017. I made tacos for everyone to see if everyone else liked it.”

In 2018, she took a trip to Mexico and then again in 2019 when she and her long-time partner visited his family. “The second time we went, I was eight months pregnant,” she says. “We drove to California and headed to Mexico.”

This trip would be an inspiration for her future taco truck business as she realized she didn’t have to have a fancy restaurant to do business. “The way I saw them make Mexican food, it wasn’t gorgeous. They had propane tank out in the open and were just serving everyone. The food was delicious.”

“My taco truck was iffy at first,” Gearon says. “I wasn’t in a great location and my truck looked raggedy and dirty.” But Gearon knew she had a lucrative idea, despite no formal cooking education.

“In my personal kitchen, I experiment with different foods and seasonings,” she says. As a result, all the entrees in her business are her own creation or “off the brain,” as she called it.

Fortunately, Gearon’s popularity when she was a dancer was enough reason for people to give her food a shot. She said what made her put her on the map was the fried chicken and tacos combo. “Once they tasted the food, I started making money. I had contracts with food suppliers that used quality ingredients, so people didn’t care about the aesthetics.”

Her business got a boost after being mentioned on a podcast shared across social media, and recently, she interviewed with the Food Truck Scholar podcast that will air soon. “I was doing pop-up events and I had been serving Amazon employees on Taco Tuesday at one of their sites.”

Gearon never rotates her creations out, only adding to her menu. “Every menu item is fire. [I] only add, unless I do my birra en consume special on Taco Tuesday,” she says. “$1.50 steak and chicken tacos on Wednesday.”

Since the menu is Gearon’s creation, customers will find items she enjoys. “My menu is based on everything I like to eat, which is chicken and tacos. I don’t eat pork and I rarely eat red meat. If I think it goes together, I put it in there.”

The mompreneur still loves to experiment with tastes. “I love sauce and seasonings. If I taste something and be like ‘Ohhhh, this would be good with xyz,’ it’s going on the menu.”

The most popular items are the Blaxican tacos, the biggest taco she has. It’s steak and chicken mixed with lettuce, cheese and tomato on a corn tortilla. “Every item, except for the tacos, has a Blaxican item unless you specify.” Gearon also makes and sells steak tacos and loaded tots topped with her (secret) Blaxican sauce.

When the pandemic hit, Gearon had a few bumps in the road. “At first there were shortages; certain foods were hard to get.” However, her taco truck business remained successful throughout the lockdowns.

She mostly ran her taco truck by her house since her kids were out of school because of COVID-19. “I made more money during COVID because of restaurants being closed or the change in hours,” she says. “I was dumping very good sales.”

Unfortunately, Gearon’s success didn’t go unnoticed and tragedy struck. Someone deliberately set her livelihood on fire. “The fire marshal said whoever set my trailer on fire poured gasoline on it. It was completely charred, and I didn’t have insurance. I just recently bought another one.”

There have been no arrests or leads, and Gearon does not know why anyone would target her. Her new taco truck is getting built, which should be ready by the end of April.

You can find Gearon on Instagram for updates about then the new truck will be ready and back open for business.  You can also support her business and the new build-out by going to her Go Fund Me campaign.