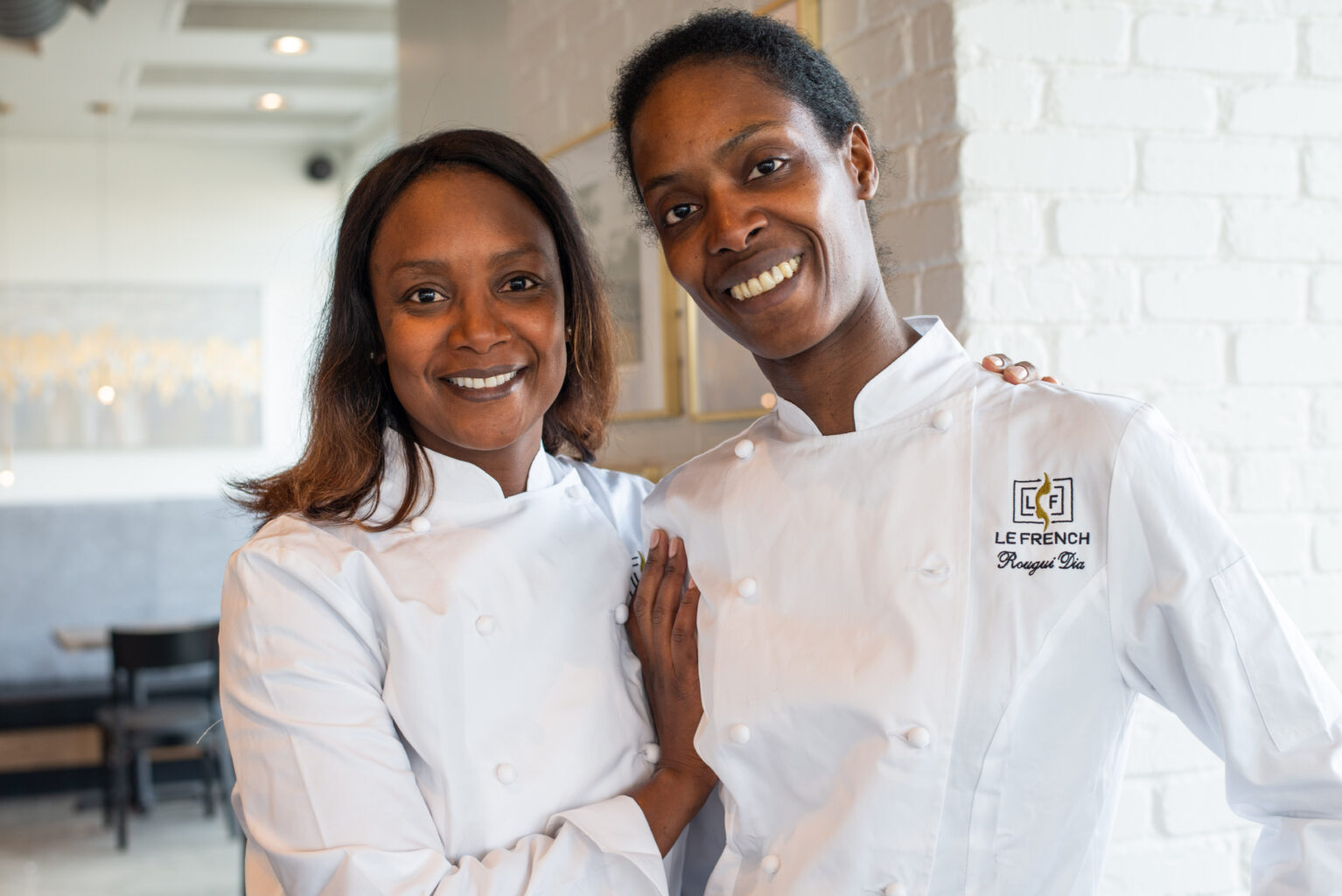 Long before two sisters traveled on different paths to America, they dreamed of one day working together in their own restaurant. The opening of Le French Bakery & Cafe in the Belleview Station area of the Denver Tech Center last April brought Aminata and Rougui Dia’s vision to life.

“We are amazed. We have people who are coming into the restaurant, and they just want to hug us. That’s how excited they were to have us in the community,” says Aminata Dia, who goes by Ami. The 77-seat modern, chic bakery and bistro is one of several restaurants offering Parisian food that opened in Denver, Colorado around the same time. It created a buzz that focused attention on the two Senegalese-French sisters presenting French cuisine with a global flair.

“Our French cuisine has a lot of twists to it because we add flavors from our different backgrounds. It’s the Senegalese background, and also the culinary experiences from our travels,” says executive chef and co-owner Rougui Dia.

The younger of the Dia sisters moved from France to the U.S. a year ago and speaks mostly French. Chef and co-owner Ami translated her sister’s description of the restaurant they created together. “Our breakfast and lunch selections are more like fast-casual food. It’s faster because it’s adapted to our clients. We have a lot of businesses near the restaurant,” Rougui says.

At dinner, the menu offers more sophisticated fare made with mostly French cooking techniques combined with global spices and Senegalese or American influences. The Dias team up on creating the dishes. “One of us might have a dish, and then we work together on it. Or we bring in something together to change it,” says Ami.

Le French serves breakfast, brunch, lunch and dinner. The food is inspired by what the Dias ate growing up outside of Paris, France and the cuisine they fell in love with as children visiting their grandmother in Senegal, a former French colony.  A gluten-free, vegan dish called gniiri is one of those dishes. It is made from creamed cornmeal with peanuts and black eyed-peas. The topping consists of roasted cremini mushrooms and carrots, fried shallots and basil, cherry tomatoes and pine nuts with a drizzle of truffle oil. “Our grandma was a nomad and living in an encampment,” says Ami. “She would cook this dish from nothing. We loved it, and we have that dish on our menu, but we added French influences.”

Another dish combining French, Senegalese and American cooking is the braised Colorado lamb shoulder. The Dias slow-cook the lamb in red wine sauce and serve it with potato purée, pickled lentils and red onions. “We’re using French cooking techniques, but then it is rubbed with more North African spices,” Ami says. The spice rub is made in house, as is almost everything on Le French’s menu. The sisters take pride in making fresh food from scratch from their unique perspective. It is a culinary point of view that Rougui employed before she left France. “At the Petrossian restaurant where I worked, I brought in items from West Africa, including sweet potatoes and plantains. It was very global,” Rougui says.

The younger of the Dia sisters arrived in Denver with accolades and recognition she earned working at Petrossian and other top restaurants in Paris as well as operating her own bakery. She started her culinary training with a cooking internship at the age of 15. By 2005, Rougui had moved up from vegetable prep cook to executive chef at the Michelin-star Petrossian. She was 29.

Her cooking talents earned Rougui the Trofemina Award and the French Medal of Honor, the country’s highest national civilian award. “I think it was because I was one of the first Black women in France to be working in a restaurant at such a level,” says Rougui. “I never cheated on my cooking. I was being true to myself.”

The owners of Le French had the commitment and courage to overcome language, cultural and gender-based challenges as they turned their childhood passion for food into culinary careers. Ami moved to the U.S. 20 years ago with her husband and five children for his IT work. “Our friends thought there was something wrong with us to be moving to a new country.” But Ami found the American culture very welcoming. “To me, I think there are great opportunities. I was able to go back to school at any age. There are some countries where going back to school is not possible to do.”

After earning her culinary degree at the Art Institute of Colorado, Ami started AmiCuisine in 2007, a successful catering company. Her 10 years of experience in catering helped her build a network and understand what the American public expects when dining out. Now, she and Rougui combine their creativity and expertise to please patrons with the food and friendly atmosphere at Le French. “When I come in the morning, it’s really to watch the quality of what is coming out, and to make sure that we’re taking care of our guests,” says Ami. “Rougui does more cooking than I do. It’s really to oversee the kitchen and make sure that on the line the food is good and what’s being done is right.”

Ami sees her sister’s knowledge and experience as fundamental to achieving their goal of being accomplished restaurateurs. As with their cooking, the sisters are mastering the art of combining cultures. Their staff of more than 20 employees includes men and women who speak French, Spanish, English and German. The work is demanding and high-stress, as it is in most thriving restaurants. The Dias have their own way of breaking the tension. “There’s laughter. We have some crazy moments. We blast the music a lot,” says Ami. “Our staff actually says we have a different management style than they are used to, but they’re learning to know it, and they’re enjoying it.”

You might even spot them dancing while the staff works on preparing dishes for the breakfast, lunch or dinner menus. “We are really trying to build a family in the restaurant. We’re trying to break the stress and also, really connect,” says Ami. “We are very inclusive, no matter the background or gender. We just want people to be happy.”

The decision to open Le French together in Denver is turning out to be a blessing for the Dias. They view America as a place of possibilities for talented, ambitious people. “It’s just a matter of whether you work hard, keep on dreaming and keep on moving,” Rougui says.

Ami agrees and advises others not to expect everything to happen at once when it comes to fulfilling your American dream. “That’s what is so awesome, the fact that you can put your heart into it. You keep on believing, you keep working and you take one step at a time.”

As for any future plans for expanding their restaurant venture, the sisters agree on doing one thing at a time. “We just want to first make sure the restaurant is where we think it should be, and after that, we’ll see,” Rougui says.