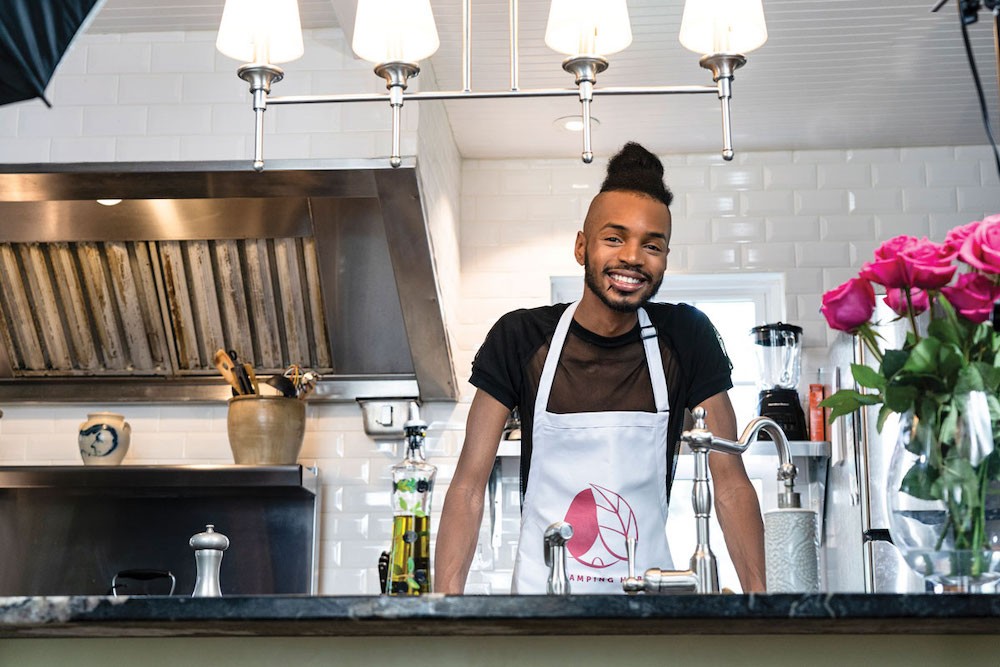 It’s not often that we come across a true multipotentialite and one who excels at every avenue pursued. But meeting a creative professional such as Stevie Boi can put that thought to rest. The Baltimore-based model and fashion designer is not only excelling at his stylistic endeavors but also embracing his culinary side with the launch of his new cookbook and seasoning this year, accompanied by a cooking show. The soon-to-be cookbook author is thrilled to share this extension of his fashion and travel experiences via easily relatable and accessible social media channels for audiences to enjoy some of his homemade creations.

The cookbook titled “Season to Taste” features about 40 recipes created by Boi with some of the highlights to include a pineapple lamb burger, mango T-bone steak and caramelized popcorn gelati. The release was delayed until later this fall due to the pandemic causing his cover shot to be canceled. A seasoning he is creating will be available as a bundle with the book — it’s a combination of Adobo, Creole and Italian — the seasonings Boi typically loves cooking with.

Boi brings his many cultural influences to play in his culinary endeavors. Born in Augusta, Georgia and a Southern boy at heart, he was raised outside the United States as both parents were in the military. Traveling extensively for his fashion career, you can see glimpses of his eclectic tastes in the ingredients he uses, dishes he prepares and also the restaurants he visits. His cooking show, Stevie Boi Eats, is a series of short episodes where he shares his recipes and restaurant reviews.  He names B. Smith, Martha Stewart and Rachel Ray among his favorite chef/lifestyle personalities and plans to create cooking-related products in the future. “I want to do pots, pans, forks, high-end fashion serveware. I created my own charcoal cutting board too.”

Boi’s creative bent of mind has always been the prime ingredient for success in all his ventures. He came to be known worldwide for his luxury eyewear collection called SBShades, made famous by fashion magazine covers and celebrities styling his creations. He followed it up with designing entire collections that he has shown at New York Fashion Week over the last few years. During the presentation of his “Pink” by SB S/S19 collection at NYFW,  extreme exhaustion led to injury, resulting in Boi having to get plastic surgery for fractured bones in his face. But he pulled it off by making 20 entire outfits plus ten extra garments two days before the event.

“It made me realize I need to work on my work ethic because I was working harder and I needed to slow down,” he shares. Thinking about what he truly loved doing and came naturally to him, he realized cooking could be his calling. His nomadic lifestyle, global travels and exposure to diverse cuisines inculcated a love for the culinary cultures of the places he visited.

He decided to make it public and started filming with a friend in Sweden while on tour. It took him two years to put together all the episodes that are now the cookbook and cooking series.

This isn’t the first time Boi is donning the title of author.

He previously released a book on his experiences in the fashion industry titled, “Shade Built My Empire,” covering his introduction to the fashion world and journey to establishing his luxury eyewear brand. Being thrown into the limelight in a way, Boi had to teach himself how to become a fashion designer. A randomly created pair of sunglasses he wore to a club more than a decade ago ended up being featured in the news and the rest is history. Overnight, people were seeking out the creator and Boi hasn’t turned back since. He left his job contracting as a supply tech for the military to pursue his natural talents.

A Look Into the Future

For Boi, the creative process is fun and he tries at every turn to engage his audience, making it an interactive experience. His audience slants majority female with some of his top fan bases in New York and California, France and London. With a focus on overall lifestyle branding, Boi has done everything from designing a cell phone with Pond Mobile to creating a line of skateboards for his new collection, SK8T. He finds inspiration in his environment and surroundings. “It’s like a weird spiritual trance that takes over me,” he shares of his process. “I don’t flip through magazines trying to find inspiration; it just comes out.”

His freestyle approach led to many milestones including back to back covers on different Vogue magazine editions and winning Fashion Designer of the Year Award presented by supermodel and icon Beverly Johnson among others.

Being a workaholic, he is grateful in a way for the pandemic pause. “Thanks to this time of being able to reflect, I really have matured in the aspect of realizing that my health is more important than any money and any level of success.” But that’s not a hint that he’s creating any less as he throws in two surprises. “I am going to start another company called Stevie Boi Fitness,” he adds. “And I would also like to be a restaurant owner.”