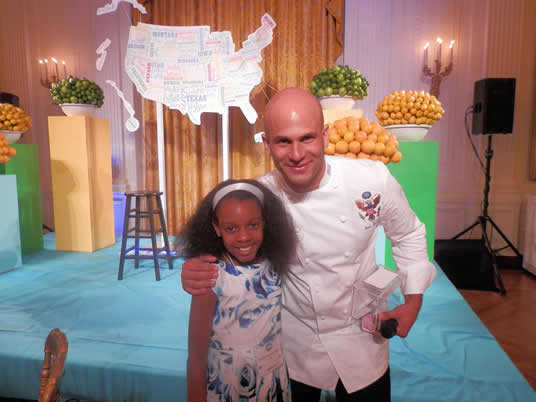 An invitation to dine at the White House would be an experience of a lifetime for many grown-ups. Imagine what it meant to 54 young cooks saluted at the second Kids State Dinner  held on July 9. “It was really exciting,” says Kindall Sewell-Murphy. “It was an honor meeting Michelle Obama and Barack Obama.”

The fifth grader from Alabama is one of the 54 kids with a winning recipe in the Healthy Lunchtime Challenge. Kindall’s Kale Broccoli Chicken and Apple Salad earned her a seat close to the First Lady at the state dinner where the kids’ dishes were served.  “One of my favorite moments was sitting at the table with Michelle Obama, taking pictures with her, and shaking Barack Obama’s hand,” says the 10-year-old A student, cheerleader and Girl Scout.

President Obama made a surprise visit to the East Room, delighting the guests with his remarks and stops at every table. He told them the First Lady had never said he could eat with his fingers at a state dinner as she did with the recipe winners. The President also got some laughs when he related his childhood memories of eating vegetables.

“So I will just tell you a story. When I was a kid — I’m now older than most of your parents, which is kind of depressing — but my family, when they cooked vegetables they would just boil them. Remember that? And they’d get all soft and mushy, and nobody wanted to eat a pea or a Brussels sprout because they tasted horrible because they were all mush,” President Obama told the White House guests. 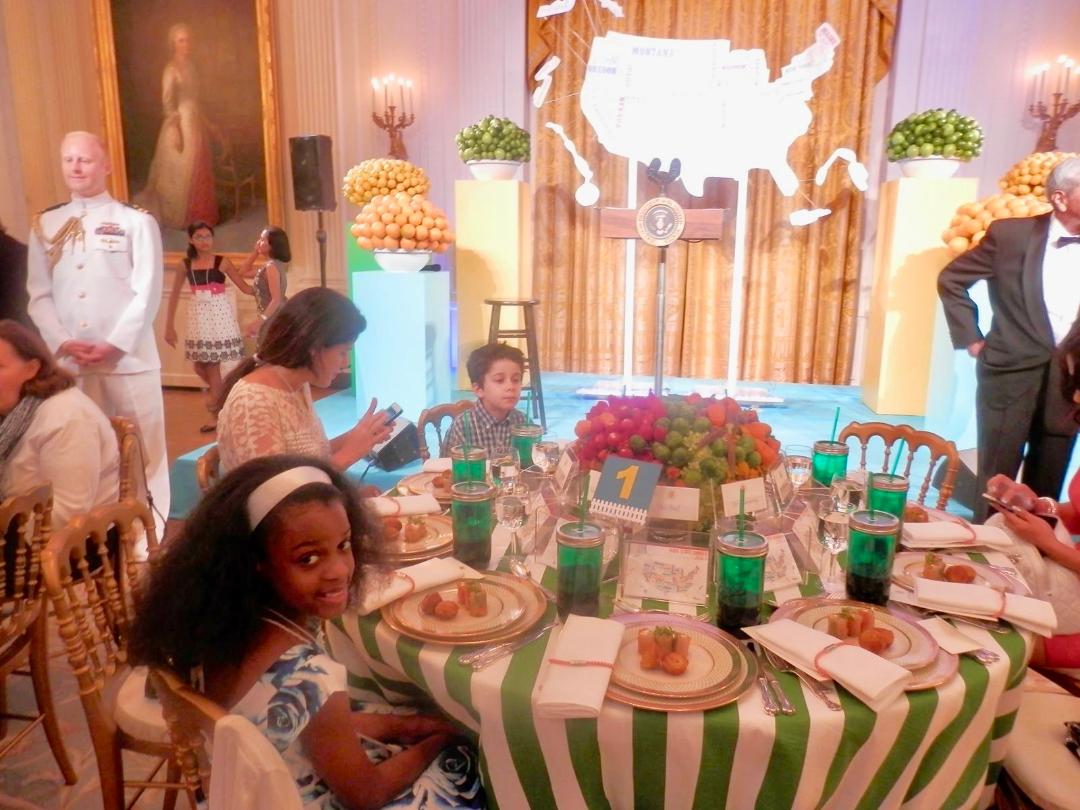 The President now likes vegetables prepared the right way and not overcooked.  He praised the kids for getting an early start on healthy eating. “So I just want to say to all of the young people here, keep it up. You guys are going to set a good example for everybody all across the country. Because you’re eating healthy, and you’re out there active and you’re playing sports, and you’re out on the playground and doing all those things, not only are you going to have a better life, but you’re also helping to create a stronger, healthier America.”

The recipe contest is part of the “Let’s Move!” initiative launched in 2010 by the First Lady to change the landscape of childhood obesity within a generation. She told her young guests from 50 states and three U.S. territories that their recipes impressed her and the White House chefs.  “So we have seen that when kids like all of you get involved in creating your own healthy meals, the results can really be amazing and delicious and fun,” First Lady Obama told the kids at the dinner. “You’ll come up with ideas that none of us grownups ever thought of. You’ll find new ways to get your families and friends to eat healthy and try new foods.”

“Let’s Move!” executive director and assistant White House chef Sam Kass and Epicurious editor-in-chief  Tanya Steel were on the panel of judges that selected the winning recipes out of 1,300 entries. The dishes created by Kindall and the other junior chefs had to be original, healthy and of course, delicious.  Kindall had no problem meeting the U.S. Department of Agriculture’s nutrition guidelines, including making half her recipe with fruits and vegetables.

“I love salad!! And me and my aunt were playing around in the kitchen and combined two of our favorite recipes,” says Kindall. “I would include on the side a whole wheat tortilla because all the other food groups are in it!” The young chef posted those comments on the “Let’s Move!” blog about the contest. She enjoys cooking with her whole family, including her siblings, her dad Kendrick Murphy and her great aunt Vanessa Sewell. But the fifth grader’s mom got to accompany her on the trip to Washington, D.C.

“I’m very proud of Kindall. She continues to surprise me every day,” says Toby Sewell-Murphy. “I’m blessed with all my kids. They are really good kids. Kindall just continues to amaze me.” In fact, her daughter has inspired the mother of three and third grade teacher to get more students at Selma’s Cedar Park Elementary School involved in “Let’s Move!” and the Healthy Lunchtime Challenge.

Kindall would like to see more fresh fruit and vegetables served for lunch at Cedar Park, where she is a student ambassador and tutor. She also plans to start her own garden, just as the First Lady has done at the White House. “I’d like to grow basil, lettuce, spinach and squash,” Kindall says.

That should please the First Lady. She saluted the energy and imagination of her young guests. Mrs. Obama also urged them to pass on Let’s Move practices by eating the right foods, staying active and encouraging others to do the same. “It’s about making sure that your body can be strong and healthy, and your mind can be ready to learn and explore and dream, today and for years to come. That’s really what this is all about. This is about giving you the foundation to fly high and dream big.” 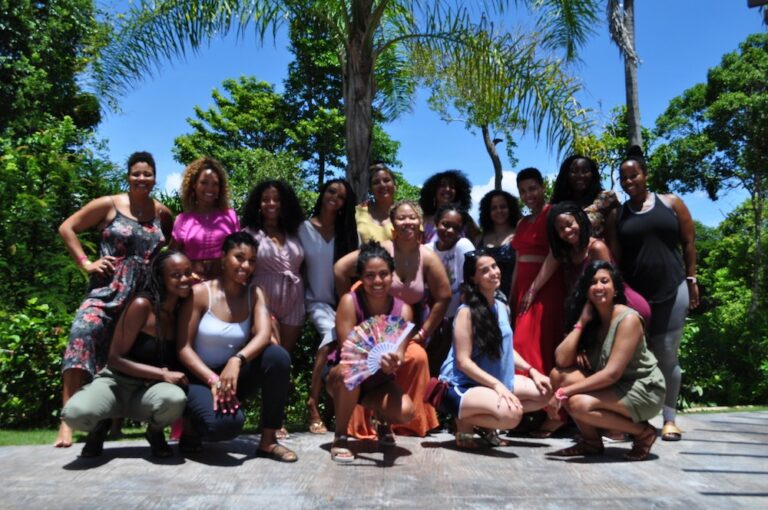 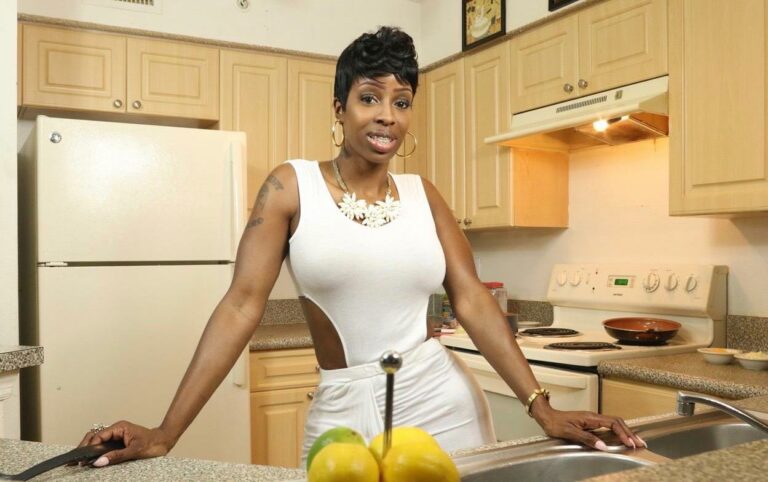 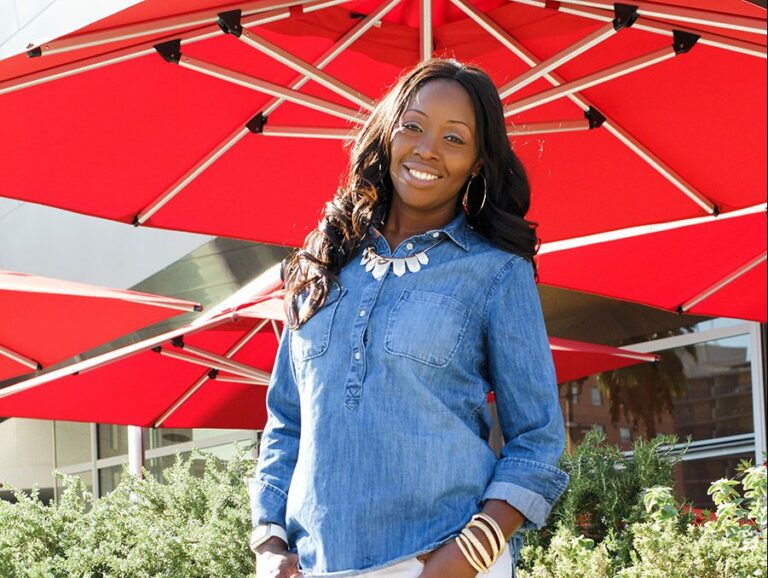