Good Girls Go to Paris: Where Crepe Lovers Stop for a French Moment in Detroit 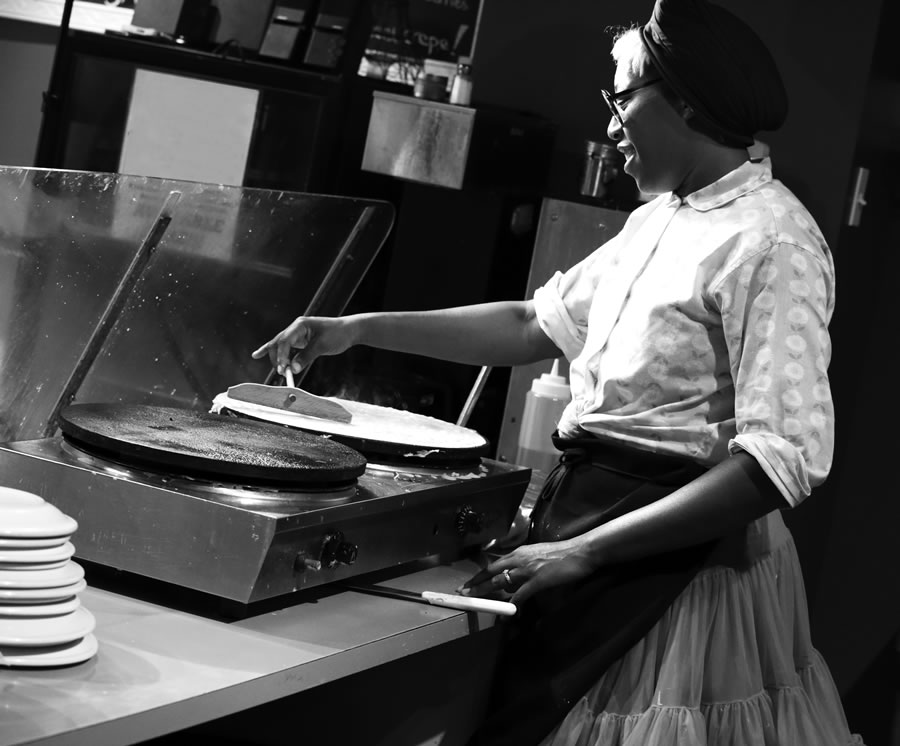 The pace of modern life can make it challenging to find time to appreciate special moments with relatives and friends. In the race to make a living, we can lose sight of what we love doing most. Good Girls Go to Paris is a place in Midtown Detroit where you can escape to smell the crepes, so to speak.

“We need to savor the moments in our lives when we can just be in the moment and enjoy our friends and enjoy what we do,” says Torya Blanchard, owner of Good Girls Go to Paris.

That advice comes from the former French teacher who took a huge gamble on her passion in 2008. Blanchard quit her job, cashed in her 401K and opened her first crepe shop. She had no restaurant experience and the worst financial crisis in decades was rocking the global economy.

The idea came to her in what she calls her “Fight Club” moment (in reference to the 1999 movie about people in their 30s coming of age, freeing themselves from material values and finding real happiness). “This is your life and it’s ticking by one moment at a time. If you’re not doing what you want to do or living the way you want to live, then it’s not a life fulfilled.”

Blanchard fell in love with crepes long before she opened her first restaurant at the age of 31. It happened when she traveled to Paris with her mother for her 16th birthday. “When I got there, I saw them making crepes on the street and I had never seen anything so magical in my life. I just thought it was really cool,” says the restaurateur.

RELATED: For Globetrotting Chef, Edward Blyden, Food is the Tie That Binds

Today, you can still find Blanchard making crepes. Good Girls has gone from a 48-square-foot space downtown to 1,000 square feet in Midtown near the Detroit Institute of Arts. She likes to think her creperie’s giant vintage film posters and casual atmosphere give customers a little taste of France.

Blanchard chose women’s names for the 50 crepes on the menu. “The Vera is named after my mother,” she says. “The Vera is bacon, Boursin cheese and spinach.” Rose is another popular crepe made with fresh mozzarella, tomatoes, basil and balsamic vinegar. On the sweet side is Fay with bananas, pecans, caramel, salted butter and brown sugar is a hit.

French Goodness in the Making

A diverse mix of students, professionals and blue-collar workers watch their crepes being made on large, flat electric griddles. The crepe makers use a wooden tool called a rake to spread out the batter before filling the French pancakes with everything from cheese, vegetables and meats to fruits, nuts and chocolate. The crepes range in price from $5.00 to $9.00.

It is almost impossible to name her favorite crepe, a question Good Girls’ owner hears almost every day who will tell you the name for her restaurant was not inspired by the 1939 movie, “Good Girls Go to Paris.” Instead, it is what Blanchard’s mother said to her when she misbehaved shortly before their Paris trip and she never forgot it.

Other life lessons about being true to yourself, making the most of criticism, and listening to that little voice within stayed with Blanchard as she put her all into becoming an entrepreneur.  Last December, she launched a new restaurant on the same block as Good Girls. Rodin Detroit is also French-inspired with its small plates, specialty cocktails, French wines, live music and art shows.  It represents a more mature vision for the African-American woman who fell in love with crepes and foreign films as a teenager growing up in Detroit.

Good Girls Go to Paris and Rodin Detroit are located at 15 East Kirby Street in Detroit.  For more information, visit goodgirlsgotopariscrepes.com or call 313.664.0490.