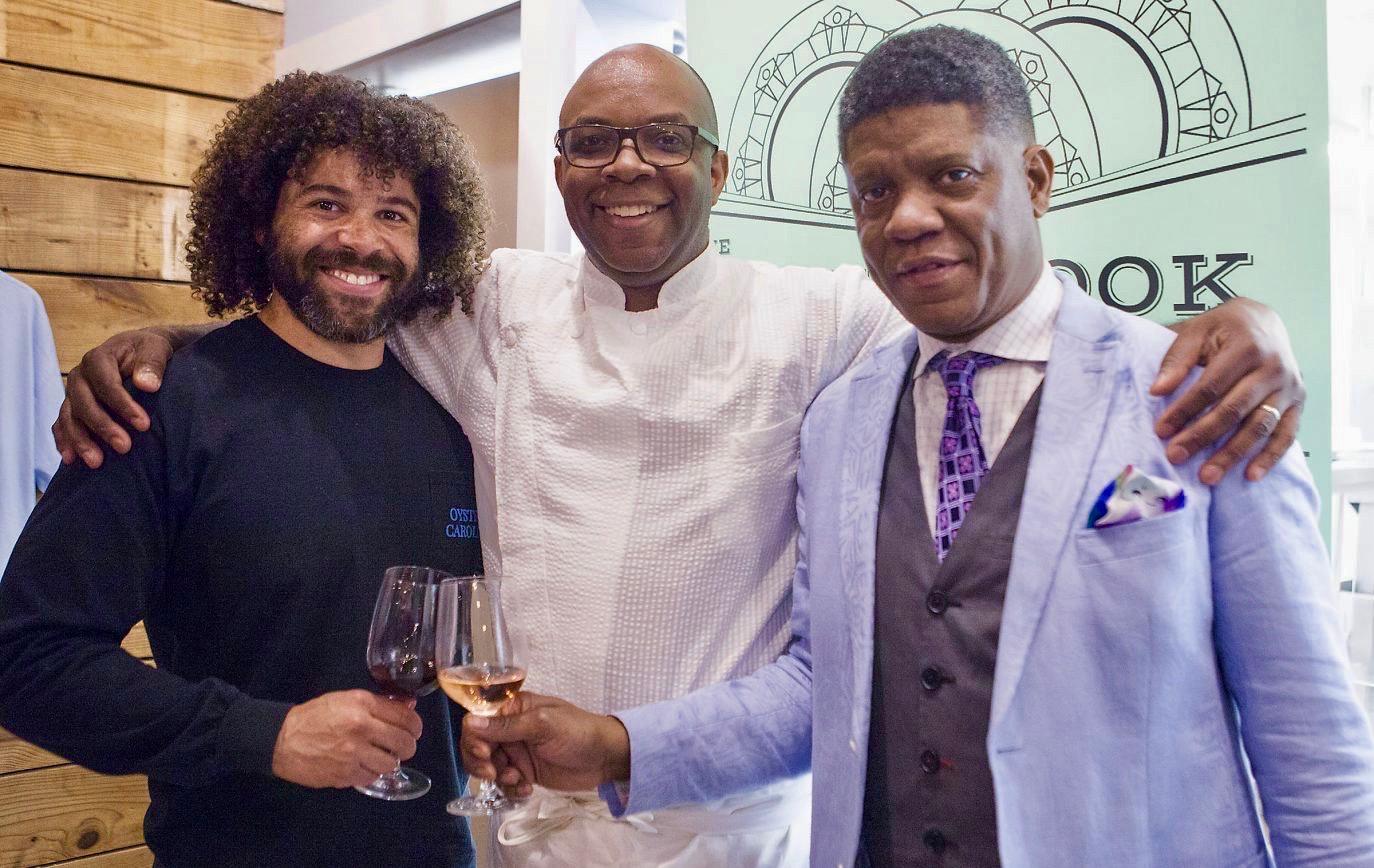 For generations of Black people in America, the decision to take a road trip came with some heavy baggage. During the Jim Crow era and even today, stopping at the wrong place for food, lodgings or even fuel could put Black lives in danger. The Negro Motorist Green Book published by Victor H. Green between 1936 and 1966 gave African Americans and other nonwhites a guide to finding safe havens, places owned by Blacks and some whites where they could get a room, a meal, gasoline or other services without encountering racial hatred.

“My mother has an original copy of one of the Green Books. We turned it into a poster for our dinner events,” says Adrian Lindsay, one of the founders of the Green Book Supper Club. The North Carolina bartender and his chef friend, Ricky Moore started hosting pop-up dinners this year. They envisioned a welcoming atmosphere where people from diverse backgrounds could enjoy each other’s company, good food and enlightening conversations about the Green Book and Black culinary history.

“Adrian and I both have spent a lot of time in the business working at local functions. It’s always just a few of us at these food events,” says Moore, the owner of two Saltbox Seafood Joints in Durham, North Carolina. He and Lindsay decided to take action on their mutual desire to see African Americans in the food, wine and hospitality professions get the recognition they deserve. “There are a lot of professionals not being showcased. We cannot sit back and wait for others to recognize us,” says Lindsay.

Taking Back Ownership of Black Contributions

The Green Book Supper Club’s Inaugural Wine Dinner held on April 30 gave Lindsay and Moore the opportunity to share information about Black culinary history and culture while promoting talented professionals who “look like us.” Chef Moore prepared all the food and Lindsay served the 43 guests who dined on Oysters Carolina, carrot and saffron soup, braised curried chicken and marinated strawberries with vanilla rum cake. The oysters came from Ryan Bethea, one of the few Black oyster farmers in the U.S. Andre Mack, founder of Maison Noir Wines, provided the wine that Lindsay paired with the dishes. “We don’t have a history of drinking wine with our foods. But really good soul food dishes and great wine go together. We just have to take our stuff back,” says Lindsay.

Taking ownership of Black people’s contributions to American cuisine in general and Southern cooking, in particular, is a major factor in the vision behind the Green Book Supper Club. Lindsay and Moore plan to present information about businesses listed in the travel book between 1936 and 1966, as well as the accomplishments of Black cooks and chefs. “I’m tired of having others claim ownership of what we created. The best cooks in America were Black slaves,” says Moore. “We grew the food, harvested the food, and we prepared the meals in kitchens throughout the North and the South.”

The Green Book pop-up dinners give Moore and Lindsay a platform for starting conversations about Black chefs and hospitality artisans past and present. “It’s interesting to see how many people are unaware that African slaves and Black people made such significant contributions to American culinary traditions and achievements,” says Lindsay.

The next Green Book event on August 18 will bring people together for an old-fashioned fish fry.  Moore receives rave reviews for the fresh local seafood he serves at his two Saltbox locations. The News & Observer correspondent Greg Cox wrote that everything he’s tried “has been nothing short of exemplary.”  So, the Green Book fish fry gatherings are destined to be reminders of the times when Black families gathered at Seabreeze Resort and Freeman Beach near Wilmington and other all-Black vacation spots necessitated by racial segregation. “It’s important that we remember and share our food traditions,” says Moore. “We always had a lot of joy and great memories surrounding our family reunions and holiday get-togethers. There were some good eats and good times.”

Ultimately, Lindsay and Moore want to expand the participation in the Green Book events. They hope to see greater diversity, including the involvement of female chefs and even white chefs. “It’s Black-centric and Black-focused, but we’re also going to bring other people into it,” says Lindsay. The conversations and presentations will change along with the venues for each event. The narrative about bringing people together to promote Black history and culture will be the same. As Moore sees it, the Green Book Supper Club is fostering knowledge and understanding. “We’re doing our part to change people’s behaviors. We’re creating great memories.”

Go to the Green Book Supper Club’s page on Facebook for information on future pop-up events.

Moore has been featured in “A Chef’s Life” on PBS and is the subject of a new television pilot.

The North Carolina African American Heritage Commission is the sponsor of a research project on the 327 sites in the state listed in The Negro Motorist Green Book. A traveling exhibit and interactive web portal will be created from the stories, archival materials and data collected.

See our story on EatOkra for information about a modern-day app inspired by the Green Book. And enjoy one of Moore’s recipes from the inaugural wine dinner in April.

Finally, be sure to recreate one of the recipes of the event, Moore’s Spiced Carrot and Saffron Soup with Radish Pickles and Lemon Oil.