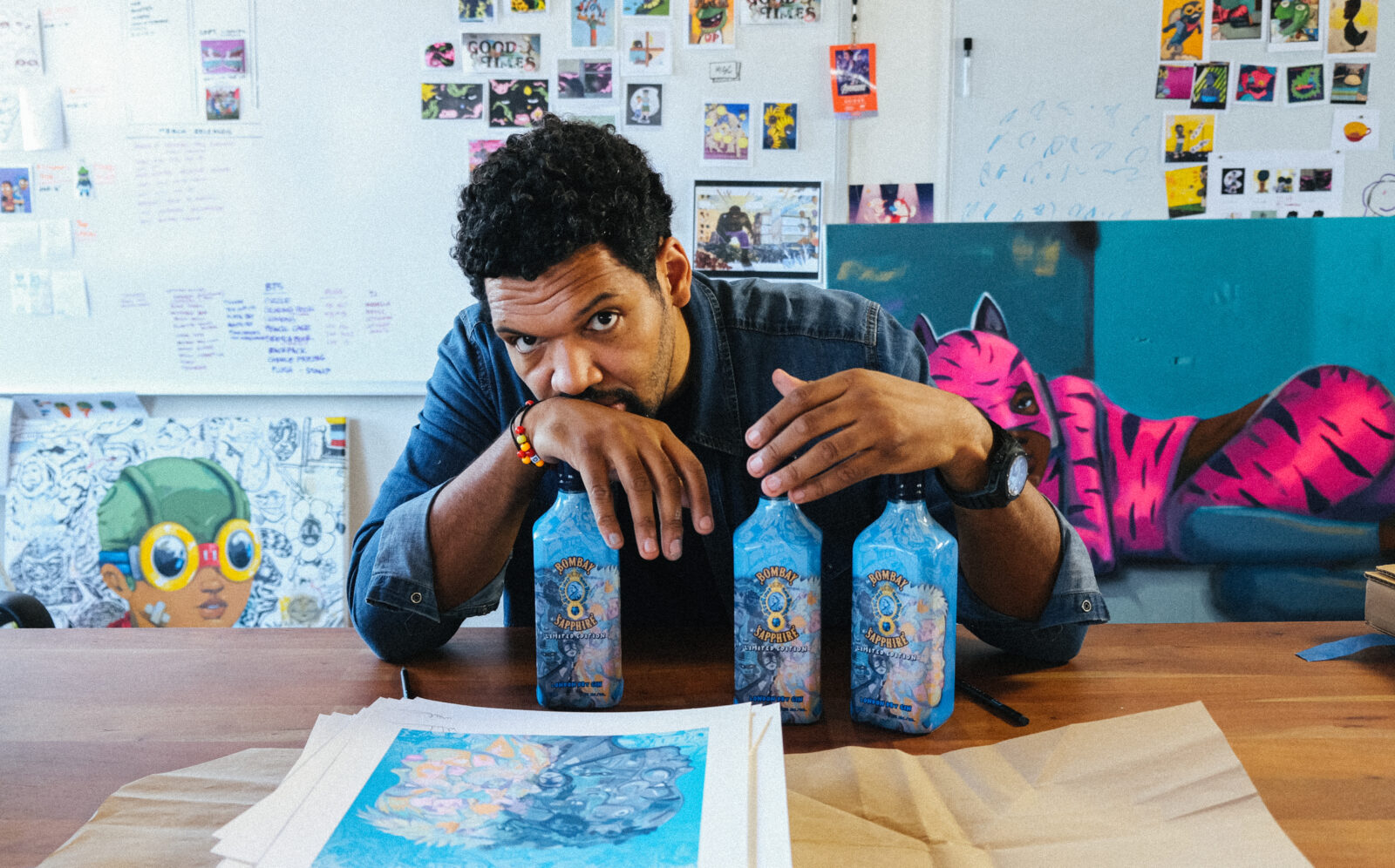 Throughout history, great duos have gotten together to create something awesome. It happened this month when Bombay Sapphire teamed up with visual artist Hebru Brantley to launch its first-ever limited-edition bottle to benefit Black Lives Matters, Chicago Chapter. The company approached Brantley about this collaboration as part of its global initiative, Stir Creativity, to inspire and awaken creativity in others. “Bombay Sapphire has always been a champion for equal representation in the arts and it was absolutely essential to us that we make this donation to support the Black community,” says Tom Spaven, North America brand director for Bombay Sapphire Gin.

The Chicago native fulfilled this mission by creating stunning Afro-futuristic designs that pay homage to his early roots as a street artist. His famous characters encased around the iconic blue bottle hit store shelves nationwide on July 1.

Brantley grew up in the Bronzeville neighborhood of Chicago, Illinois and attended Clark Atlanta University where he earned a bachelor’s degree in film from Clark Atlanta University. In 2002, he sold his first painting, which boosted his confidence to pursue art exclusively. Influenced by the South Side of Chicago’s AFRICOBRA movement in the 1960s and 1970s, Brantley’s pieces have captured the eyes of clientele such as LeBron James, George Lucas and Jay-Z and Beyoncé. His continued pursuit of creating narrative-driven work has made him a world-renowned artist.

We asked Brantley a few questions about his career and this collaboration. His answers will ignite your creativity and motivate you to use it as a catalyst for change.

When did you realize that you had this innate creative gift and how was it fostered? Who were some of your mentors growing up?


When I was a kid, my mother got me books on all the greats, Basquiat, Warhol, Herring. She opened the doors to this whole new world and encouraged my interest in the arts. From there, I became interested in street art and started tagging around Chicago with my friends, at the time, replicating the styles of the artists that I so admired, until I found my own.

What are some of your greatest accomplishments/memorable moments in your career?


There are many moments throughout my artistic career that helped shape me into the artist I have become. One experience in particular that comes to mind is my experience at Bombay’s Artisan Series back in 2012. The exposure I gained from my success in the competition helped me to sell a painting to a well-known rapper, which was a turning point in my career. Another moment was definitely my immersive art experience called Nevermore Park. We opened the doors in Chicago last October and received a great response. It was the first time people were getting the chance to interact with my work three-dimensionally. It was a very special moment for me.

What made you decide to support Black Lives Matter?


I create work for people who are not accustomed to seeing themselves represented in the world. I seek to change the conversation around what it means to be a person of color in America through my art. Together, Bombay Sapphire and I were eager to use this new bottle design launch as a means to help the Black community in Chicago and Black Lives Matter Chicago seemed like the natural choice for the partnering charitable organization. I'm grateful that I can use my platform and this opportunity working with Bombay to help push change as it pertains to systemic racism and police brutality affecting Black Americans. It’s a very personal takeaway for me.

Why collaborate with Bombay Sapphire?

It all started with me being a part of the Artisan Series back in the day. I had a very successful Miami Art Week experience as a result, which was a turning point in my career. Since then, the brand has been a big supporter of my various creative ventures, like sponsoring the opening night of Nevermore Park, immersive art experience, and one of my most ambitious projects to date. It felt only right that Bombay Sapphire and I were able to do this together to benefit Black Lives Matter Chicago, to support the critical work they do in fighting for racial justice in my hometown.

What inspired the artwork?

I knew I wanted the design to inspire hope for a better future and shine a light on the courage and resilience of Black people in America. There are very few examples of Black prominence in fantasy, science fiction, adventure and hero-type stories. That’s one of the reasons I created and continue to highlight strong heroic characters in my work — including on this bottle. We hardly ever see ourselves as protagonists and I just want to continue seeing something cool in the world that resembles our community

How does it feel to see the finished product?

It was cool changing up and working within a style that I don’t always get to work in, so it was exciting and challenging. When you create something like this, you want it to have a broader appeal, I think, and I intended to engage with those people that I felt responded to the brand and create an aesthetic that coalesced with that idea of what I feel this brand is. I was so excited to be able to hold the final bottle in my hands, and I couldn’t be happier with how it turned out.

In addition to this new collaboration with Bombay Sapphire for a new limited-edition bottle, what else do you have in the works?


Soho House and Bombay Sapphire have recently announced the Soho House Art Prize, which will give unrecognized emerging talent a pretty cool opportunity to gain recognition and present a solo showcase at Soho Beach House during Miami Art Week this year. I’ve been chosen to serve as a judge alongside some pretty impressive folks in the art world, so I’m excited. I'm also working toward a few exhibitions in 2021, brand collaborations, etc. We have some exciting things coming up, so stay tuned.

You can support this partnership by picking up the Bombay Sapphire Gin + Hebru Brantley limited- edition bottle at your local stores. It benefits the Black Lives Matter, Chicago Chapter in its efforts to create just and equitable systems for Black people.