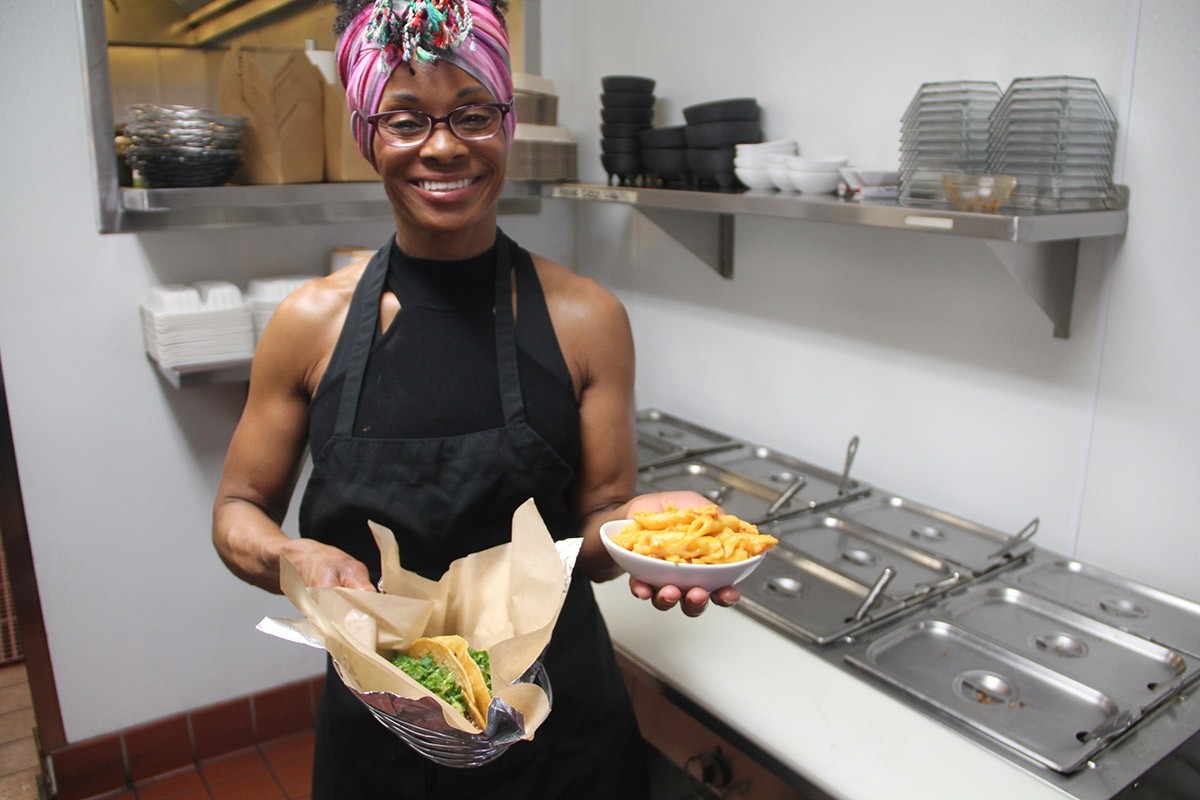 Vegan paradise might not be your first impression of Inglewood, Calif. but step inside Stuff I Eat on Market Street and chef Babette Davis will introduce you to incredible soul food made solely from plant products. The restaurant itself is pretty bare bones – Davis allows her food to speak for itself. A steady crowd streams in as she orchestrates a tight crew of maybe ten at most, at the venue where she has been serving healthy eats since 2008.

“We are very fortunate and blessed,” says Davis, speaking of recent Buzzfeed.com and Mercy for Animals videos that have resulted in some recognition for an otherwise unknown eatery. “Their reach was incredible, we’ve had a few million views on each. And we are so close to the Los Angeles Airport so we get customers from everywhere.”

Opening a restaurant happened quite by chance, as Davis readily admits she never cooked before transitioning to a vegan in 1990 when she was introduced to a plant-based diet by her husband. She still remembers her first vegan meal prepared by him. “String beans, a salad and pan grilled tofu, with Basmati brown rice – I had never even heard of that. I was intrigued by what I ate and wanted to learn how to make it.”

Part of that journey included educating herself. Two books that changed her life were “Mucusless Diet Healing System” by Professor Arnold Ehret and “Fit For Life” by Harvey and Marilyn Diamond. She realized that some of the health issues she was experiencing were due to improper food combining.

Flash forward to today where the menu at Stuff I Eat offers a plethora of healthy plates, most featuring a base comprising of wild rice (which is more grass than grain), beans and tofu, all tried and tested in Davis’s kitchen. A combination of varying ingredients and condiments are added on to create some of the best sellers – the Kilimanjaro quesadilla, enchilada pie, organic soul food platter, nutburger, lava burrito and more.

Davis accepts though that while she is vegan whole-heartedly, not everyone that walks into her restaurant is. But the journey of education and awareness continues, whether at Stuff I Eat or the many speaking engagements she eagerly participates in and hopes to do more of in the future. As part of her efforts, Davis is now working on a series of fun books, the first of which is the Crave series with a book titled, “Cash-in-on-Cashews,” where she teaches making parfait, cobblers, pies, and cakes with cashew nut.

Having experienced the advantages in her own life, as an active and healthy 66-year-old, successfully running this vegan haven that will celebrate its tenth anniversary next year, Davis holds herself responsible in imparting her knowledge and experience as regards veganism. “I believe that the diet for the human species is plant-based, and this is an individual journey for us all.”

Stuff I Eat is located at 114 N Market Street.  For hours and menus, visit www.stuffieat.com.  For more information about Davis and for bookings and events, visit www.chefbabette.com and follow her on Facebook and Instagram.

Philly’s Spirit First Foods Shines in First Vegan Restaurant Week
When it Comes to Vegan Dining in Philly, The Home of The Cheesesteak Proudly Vedges Out