Jambo Cafe: A Stew of Satisfying Flavors in Santa Fe 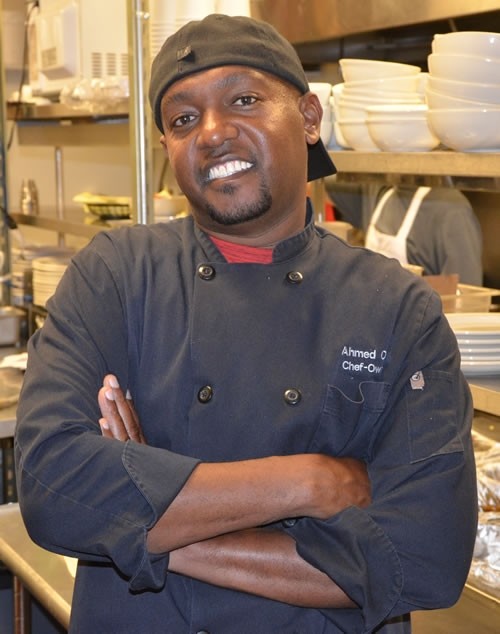 The aroma of turmeric, coriander, cardamom and other spices reeled him into the kitchen whenever he returned home from school on the island of Lamu. As the oldest of 11 children, Ahmed Obo knew staying close to his mother’s side would provide an insider’s view of cooking magic that he would otherwise miss. “A lot of time, she would send me to the store to buy spices,” says the owner and executive chef of Jambo Cafe in Santa Fe, New Mexico. “In our culture usually the women are the ones who cook.”

Today, loyal patrons and out of town visitors are lured to the cafe at 2010 Cerrillos Road by the lively flavors coming out of Obo’s kitchen. What he learned from his mother and from cooking for tourists on his father’s sailing tours became the foundation for his African homestyle cuisine. Obo serves the multicultural flavors he loved growing up on Lamu off the coast of Kenya.

RELATED: Food of Zimbabwe Remembered Away From Home

RELATED: Move Over Jollof Rice, Fufu is the Next Big Thing

“We would get spices from India and Zanzibar, ” says Jambo’s owner. “We saw a lot of Arab and Indian influence, and at the same time, African influence because we are along the coast.” Lamu is one of the oldest Swahili towns in East Africa. Exposure to the culture and cuisines of people from Oman, Yemen, India and Portugal seasoned Obo’s culinary point of view.

“People ask me what we would eat. I’d say coconut chicken curry. But anybody from Africa would ask where is the goat?, ” says Obo. “Before I opened the restaurant I had goat on the menu. The majority of people who try it for the first time love it.” In fact, the most popular dishes at Jambo Cafe are the curry and the goat. Their presence on the menu is the fulfillment of a dream Obo held close to his heart long before he became a chef.

When an Idea Becomes a Success

The first glimmers of the idea of opening his own place surfaced while Obo was still in Africa. “A lot of times, when I would take tourists out for fishing and I cooked for them, they would say, ‘You could have a restaurant.'” Decades later, he opened Jambo Cafe in August of 2009. “It’s been a really great and touching experience. In the beginning when I opened, I didn’t know what was going to happen,” Obo says. “But the response of people is amazing. It feels so good for me to do something different and people appreciate it.”

Offering a fusion of African and Caribbean cuisines in a town known for chilies and New Mexican fare took preparation and courage. It has paid off with accolades for Obo’s cooking. His participation in the annual Souper Bowl, a fierce competition that raises money for the Food Depot food bank, won Obo the sought-after Best Soup award four years in a row. His first job in a professional kitchen came with far less recognition.

Obo accepted an invitation to work as a dishwasher in a Santa Fe restaurant not long after his arrival in America in 1995. He devoted time and energy to learning the restaurant business, often working two jobs on his journey from prep cook to executive chef. He remembers people who helped him with gratitude.

“While I was in Mount Kisco, New York, I worked two years at the Fish Cellar. The chef and I were very close to each other.” Chef Joe Sosa is one of the mentors who encouraged Obo to develop his culinary chops. “He saw what I had, what I can do. He actually pulled me aside and said, ‘I can see potential in you as a chef.'”

Obo’s potential landed him positions at the Inn of the Anasazi and Zia Diner, both respected establishments in Santa Fe. However, as the father of Mima, his now 17-year-old daughter and Salim, his 14-year-old son, the chef put his dream on hold. Taking care of his family in the U.S. and helping his siblings back in Africa remained his primary goals. “The main reason that I came here was to help my people,” he says.

It wasn’t until Obo and two friends from Kenya started offering African dishes at a flea market on weekends that he could look beyond the risks and see real potential in opening his own cafe. His friend, Abdul Soud is now the manager at Jambo Cafe where Obo’s brother Swaleh helps out. The restaurant’s Lamu Coconut Pili Pili Shrimp, Coconut Chicken Curry and other East African fusion dishes keep the restaurant busy. The mango cobbler and coconut cardamom flan have customers coming back for more. “The whole community has really embraced me,” says Obo. “They come and bring their families and bring their friends.”

Jambo Cafe’s strip mall location does not discourage fans from praising the food. Anne Hillerman from abqjournal.com says, “If you haven’t eaten here yet, you ought to.” Tripadvisor.com ranked the cafe #2 on its list of 462 Santa Fe restaurants. Yelp.com gives it four and a half out of five stars.

Food Network star Guy Fieri stopped by Jambo Cafe for a 2013 episode of “Diners, Drive-ins and Dives.” He had met Obo five years earlier in a visit to Zia Diner. Fieri watched Obo prepare two specialties, Banana Leaf Wrapped Island Spiced Mahi Mahi and Caribbean Goat Stew. Fieri told Obo he was proud of him. “He was happy to see what I have done,” says Jambo’s chef.

Obo’s family in America and back in Africa are just as proud of his commitment to helping others. His wife Zuwena Salim manages Jambo Imports, a few doors away from the cafe. Proceeds from the spices, jewelry, artwork and clothing sold at the store fund a health care clinic in Lamu. A cousin Obo helped send to nursing school runs the clinic that serves 25 to 35 children and adults a day through Jambo Kids Foundation.

Obo’s dreams for the future include a cookbook that will raise more money for his charitable causes, including schooling for two more siblings and several nieces and nephews. He is weighing whether to open a second Jambo Cafe. Obo says he’ll do what he has always done — given from his heart and relied on God to guide him. “My experience is that you do not stop giving back. Before I opened the restaurant, I was helping and giving. I’m still doing it and it comes back to me.”

Jambo Cafe is open for lunch and dinner, Monday through Saturday. Carry out and catering are available. Go to www.jambocafe.net for more information or call 505.473.1269.   Meanwhile, try this Lamu Coconut Pili Pili Shrimp recipe for a taste of Jambo Cafe’s flavors.

1.  For Pili Pili spice mix, put all of the ingredients into a food processor or blender, except the 1/2 cup of olive oil.  Keep running and add the oil slowly until it turns into a paste.  Scoop out and transfer into a bowl.

2.  For the coconut sauce, over medium heat, put the remaining 1/2 cup of oil in a large saucepan with the onions and garlic. Sauté with a wooden spoon until the onion and garlic are soft.  Add the Pili Pili spice mixture.

4.  Turn up the heat to medium-high and cook about 5 to 10 minutes. Add salt and turn heat down to medium. Cook for about 25 minutes, stirring occasionally. Turn off heat and set aside.

5.  For the shrimp, peel and devein or get pre-peeled.  Marinate the shrimp with garlic, salt and olive oil (just coating the shrimp).  In a separate pan, cook the shrimp in small amounts of oil, about 3 to 5 minutes until pink. Pour the sauce over the shrimp.  Combine and serve with basmati rice and sautéed garlic spinach.