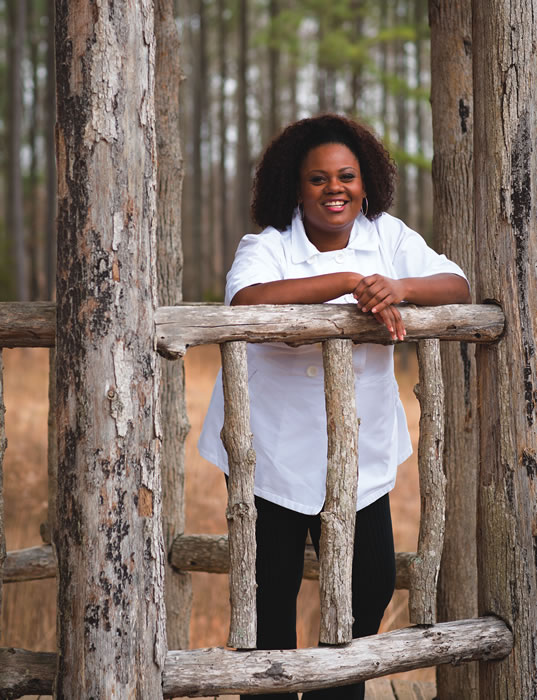 Growing up in Georgia and traveling to the family farm in Charleston, South Carolina, chef Jennifer Hill Booker has totally brought her life’s experiences full circle.  With the success of her first cookbook, “Field Peas to Foie Gras: Southern Recipes with a French Twist” released last September, Booker is following her passion for sharing her Southern heritage with others in the states and around the world.

“I spent every summer and holiday from like birth there and learned how to plant, grow and harvest crops, raise livestock, how to hunt and fish, churn butter, make bread, farm hogs, chicken, fish, you know all of that was part of the everyday growing up experience.  And as I grew up, I found out that although we owed the land, that allowed us to maintain it and a lot of bartering for what we needed and a lot of cash crops for equipment and things like that,” says Booker who was just there for Thanksgiving.

Although the seeds for a career as a chef were firmly planted since she started cooking at the age of nine, Booker’s dream wouldn’t be realized until after earning traditional degrees at the request of her parents from Oklahoma State and the University of Tulsa.  “Once I graduate from the University of Tulsa, that spring I graduated and that fall I started culinary school.”

RELATED: A Lifetime of Delicious Food and Memories with Dr. Maya Angelou

RELATED: Chef Marvin Woods: A Talk with One of the Country’s First Celebrity Chefs

Off to Paris to Le Cordon Bleu Booker went to follow her dream where she says in her book that the “instructors were especially tough on women, letting us know what they thought of us as housewives and felt we had no place in the kitchen.”  She toughed it out and went on to graduate with top honors and would later teach at the Atlanta campus.

The book chronicles her family’s life on the farm with 135 recipes, stories, tips and valuable information that takes you back to your own childhood.  Whether you grew up on a farm or not, many of the recipes are familiar.  As an avid traveler, Booker sprinklers in her French training for a nice twist and fusion of the two.

“I like to cook what is in season and that usually inspires me to create a meal.  I honestly cook what I like to eat. I love fresh vegetables and fruit. I love seafood, I love charcuterie so sausage making, smoking and curing, that excites me.  These are usually what I tie into whatever menu that I create.  My foundation is southern, my family is from the Mississippi Delta, and classic French really kind of refined it and the two cuisines are so very similar that is it an easy marriage,” says Booker.

Booker currently lives in Georgia and serves clients through her company Your Resident Gourmet which goes beyond catering to include cooking classes, personal cheffing, skills and techniques classes and more.

2015 will prove to be just as busy as Booker plans to return to her alma mater, Oklahoma State University, in February for a huge OSU day and book signing and if you’re cruising with Tom Joyner this April for Fantastic Voyage 2015, you’ll see Booker along with chefs Jeff Henderson and Ken Patrick in the line-up.  A trip to Haiti is also on the calendar for a speaking engagement at a new culinary school that will soon open and a proposal for her second cookbook has been submitted and awaiting a decision.

To keep up with everything Booker has going on, follow her on Twitter and Facebook. To learn more about  “Field Peas to Foie Gras: Southern Recipes with a French Twist” and order your copy, be sure to stop by our Book Grub section.