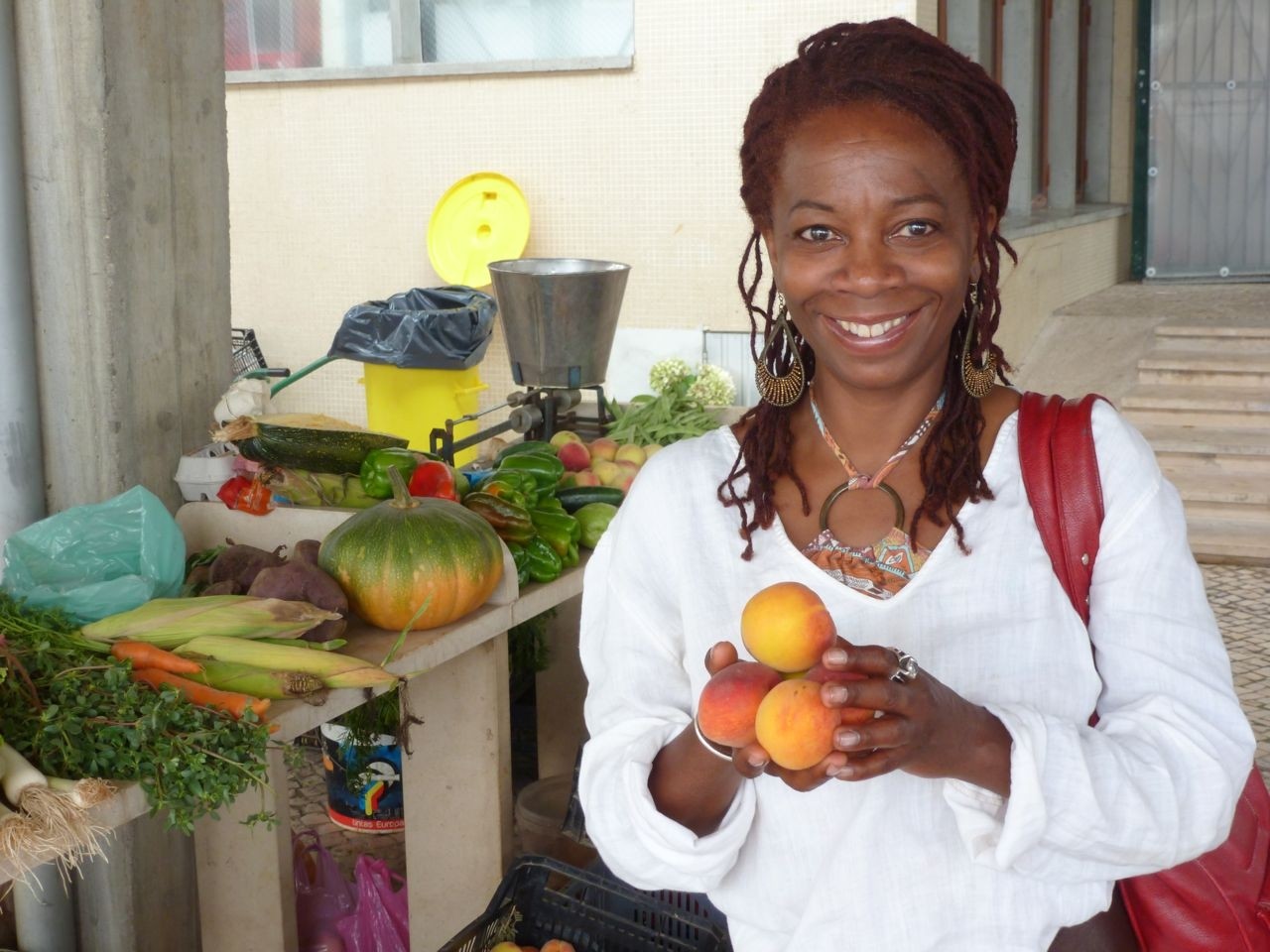 Foz de Arelho is a seaside resort town on Portugal’s Silver Coast, near to Nazaré where Hawaiian pro surfer Garrett McNamara holds the record for riding the biggest wave ever surfed and between Porto (home of port wine) and the capital city Lisbon with it’s awesome architecture, fado clubs and late-night street party and restaurant culture.

The one-time fishing village of Foz, now something of a laid back playground, is where Jennifer Moseley, the London-born, Toronto-raised daughter of a mother from St. Lucia in the Caribbean and a Cuban dad, took her French-flavored cooking skills and daughter, Victoria (now 19), ten years ago.

She lives in a three-story house, with a fragrant herb garden and salad patch in her otherwise unkempt garden and a view across the tranquil Óbidos Lagoon to the shores of the Atlantic.

Moseley is living, fun-loving, simmering proof that we have many choices and turning points in life. You can choose to reinvent yourself. You can follow your heart and your dreams. You can take a risk and make the world your oyster.

What did Helen Keller say? “A life without adventure is no life at all.” And Maya Angelou? “If you don’t like something, change it. If you can’t change it, change your attitude.”

Moseley has taken risks, followed her dreams, had adventures, changed her mind — and her attitude. Read on and you’ll see.

In case you don’t read all the way to the end, this being the cooking and home entertaining issue of Cuisine Noir, let’s start with what Moseley suggests:

On Living in Portugal

Moseley’s typical working day begins with a visit to one of the local farmers’ markets to look at what’s seasonal and inspiring for the ever-changing menu at Caravela Irish Pub, where she is the chef. Caravela is not just a pub. It’s a bistro you go to for the food and the ambience. It’s the place in Foz to go if you speak English or if you are Portuguese, young and hip, with sophisticated tastes.

“I don’t cook English or Irish food because it doesn’t interest me,” Moseley says.

“And I don’t cook Portuguese food because everyone else does.” No bacalhau (salted cod), which reputedly can be done 365 different ways, one for each day of the year. No caldeirada (the famed Portuguese fisherman’s stew).

She will sometimes do her version of the ubiquitous Portuguese sardine, found on just about every menu throughout the country.

“I love sardines,” she says. “But the Portuguese way is to grill them whole, without cleaning them. You eat around the insides. I clean them and stuff them with lots of mint, olive oil and rock salt and grill them like that. They’re fantastic.”

“I change the menu all the time depending on what I feel like cooking,” she adds.

“Last week I made a fresh tomato-basil salad from my garden, with goat cheese and garlic toast. Nobody ordered it. So it’s a bit hit and miss.

“I did a green chicken curry the other day and it sold out.

“We have some standards. We’re known for our 250gm 100 percent ground beef burgers with hand-cut chips and salad served with caramelized onions, mustard and mayo. Nobody else round here does that.

“Sometimes I’ve been asked if I make chili. No, I don’t. I call chili prison food. You make it and slap it on the plate. That doesn’t excite me.

“Food to me is about creativity. It’s seasonal, so ever-changing. And you can do totally what you’re in the mood to do. If it excites me, I’ll do it. If it doesn’t, I won’t.

“I know I’m overqualified for where I’m working now and so does my boss.

“Because I am who I am and where I come from and being the woman I am, there are very few people I could work for here. The work ethic in Portugal is very different. Worker and employee rights are almost nonexistent. I cannot work with racism or sexism, so now have a job where I am pretty much left alone to do what I want and that suits me.”

Moseley’s family emigrated from England to Canada when she was seven years old. She kicked off her adult career, in Toronto, doing advertising and marketing. She played with paint and paper, got into photography, renovated two houses. Then, at age 32 (she’s now 51), taking a break from formal work to look after her baby daughter, “I woke up one day and said, ‘I want to do food!’”

Instead of going to school, “I went and worked in some really great restaurants, at first for free.”

One of her early mentors and the person she credits for her French flair and deep knowledge of French techniques — and, in fact, much of what she knows — was renowned French Master Chef Didier Leroy, an import to Canada who became one of the country’s top chefs. “He would make grown men cry. He’d throw whisks across the kitchen. But he would never yell at me. He would just say, ‘Do it over.’”

From restaurants, Moseley went into high-end catering and learned, “I have this God-given skill to organize, facilitate, take a concept and bring it to fruition. And that’s basically what catering is, aside from the food.”

And then she worked as a food stylist on films — eXistenZ with Jude Law and Down to Earth with Chris Rock (a remake of Heaven Can Wait).

“It was very lucrative. At the time, Toronto was the Hollywood of the North for tax reasons. The way the government had positioned things, it was worthwhile for U.S. film companies to set up in Toronto.”

Then she decided to move to Portugal.

“I wanted my daughter to see another way of living when she was still young enough to come with me. I wanted her to experience a lifestyle less focused on material things. Where I lived, it was very much based on having the right shoes, the right clothes.

“And I liked the idea of challenging myself to move outside my comfort zone, which I feel more people need to do. It’s good to see that the universe doesn’t center around where and how you live.”

Portugal — and where she chose to put down roots — wasn’t ready, she knows, “for what I can do and have done with food. I had to put the breaks on in my evolution and do basic things. But I try and do them with a bit of a twist.” She tried working in a five-star Marriott. But as she says, she is her own person.

One or Two Reasons to Visit Portugal?

“You can buy an excellent bottle for four euros; an amazing bottle for six euros. They sell basic crap as Portuguese wine in the US. The smaller wineries don’t make enough to get exported. People have to come here to drink it.

“And tell them that when they come, they must leave their American attitude at home. You can’t get uptight. Here, you go with the flow. You come and enjoy the people and the place. The air is clean, the water is clean and the people are very real. They either like you or they don’t. The pace of life is much slower. At lunchtime, stores close for two hours so people can eat lunch.”

Moseley eats lunch. In fact, she only opens up and things only start cooking at 4 pm.