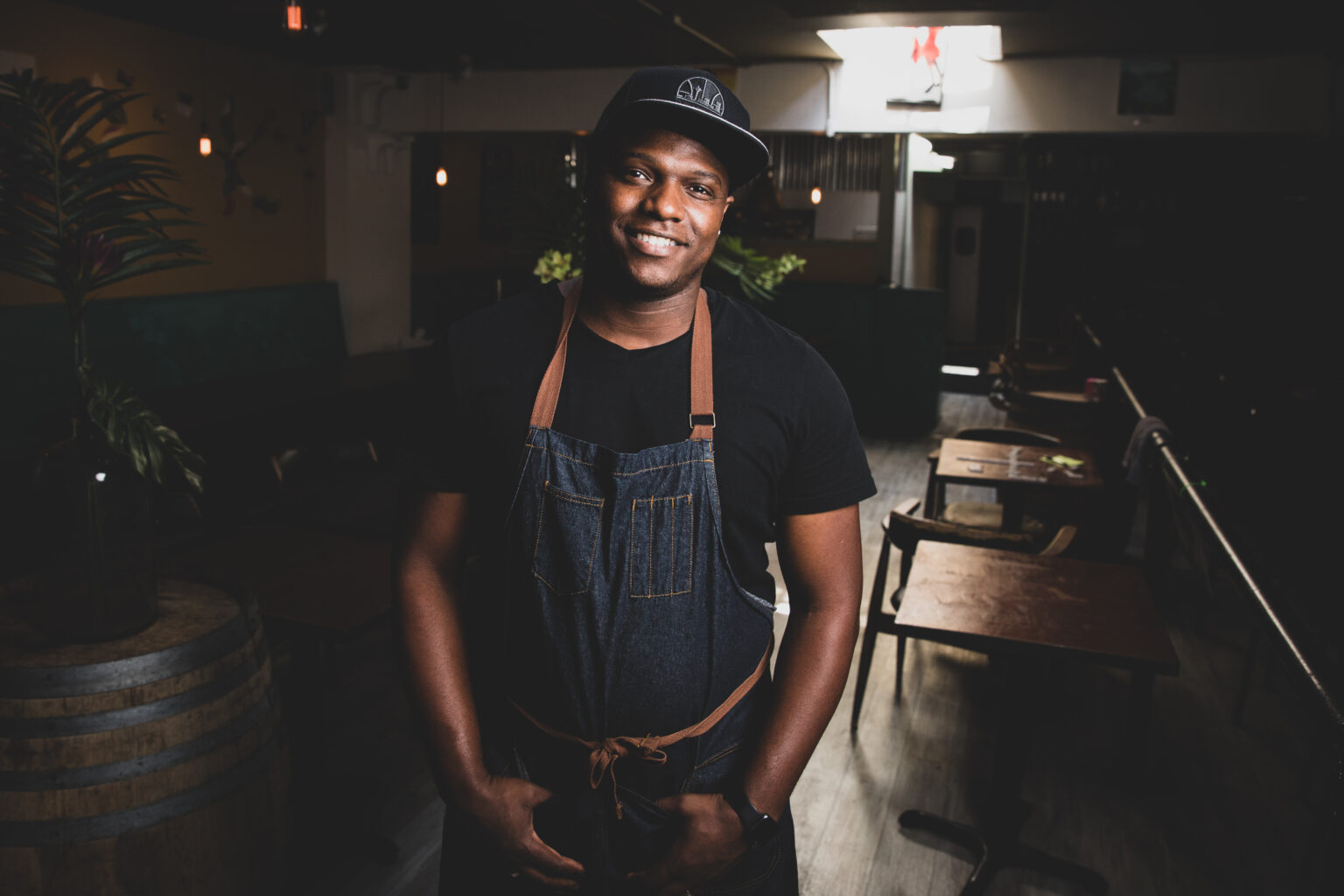 A hearty laugh comes with a Seattle chef’s acknowledgment of how long he has loved Caribbean food. It has been so ever since Trey Lamont got his first teeth and could chew on the fantastic flavors from the pots on his grandmother’s stove. Now the co-owner of Jerk Shack gets his greatest fulfillment from seeing huge smiles of satisfaction on the faces of diners in his restaurant.

“It’s also when people from my background of Caribbean descent come into the restaurant, taste the food and really give it praise,” says Lamont. The Seattle native and his business partner John Devine enjoy a feeling of accomplishment from providing a place where everyone is welcomed. They especially want Black people to be comfortable and content when they come to the Jerk Shack.

“We want to give everybody a seat at the table, really,” says Devine, the co-owner. “Just from the people that come through, and the relationships we make, the restaurant has turned into a platform for people in the community to be able to voice themselves.” Devine and Lamont believe they are building a Black-owned business that can help the Belltown community and local merchants thrive.

For the past six months, Lamont had to get gratification from customers calling in for pick up orders. The pandemic shutdown indoor dining at Jerk Shack and restaurants across the U.S. in March. Seattle restaurants are still adjusting to the state’s rules for limited dine-in services.

The Jerk Shack is located on 1st Avenue in the waterfront area of downtown Seattle. Lamont and Devine became partners last year to buy out the brick and mortar business from the restaurateurs who used to operate The Innkeeper at the same location. “One of the biggest challenges we face as Black business owners or potential business owners is access to capital,” Devine says.

As the founder of Divine Intervention, a firm that helps clients obtain capital for commercial ventures, Devine was able to assist Lamont in securing funding for the restaurant. They are now the sole proprietors of what the chef created when the former owners recruited Lamont to transform The Innkeeper into the Jerk Shack. “They were looking to sell because I believe when Trey first went into business with them, the intention was that he would buy them out,” Devine says.

The opportunity to transition from his popular Papa Bois food truck into the Jerk Shack arrived in 2012. Chef Brian Durbin became a fan of Lamont’s Caribbean creations after his son took a cooking class from Lamont and told his dad about the food truck. “They had owned the Innkeeper for about seven or eight years and never turned a profit with it,” says Lamont.

The following Lamont captured in his food truck days brought in enough patrons to turn a profit in the Jerk Shack’s first year of operation. The transition gave Lamont a place to showcase his approach to Caribbean cooking in a colorful atmosphere with an island vibe. “It allowed me to make plates of food that I was passionate about and continue doing what I love to do. That wasn’t a challenge. That was a blessing,” Lamont says.

The passion Lamont puts on a plate is a flavor profile that represents the Caribbean as a whole, not just Jamaica. He prides himself on made-from-scratch cooking that offers a fresh, flavor-packed quality that stands out, especially to patrons familiar with top-notch Caribbean cuisine. “It might come out looking different only because I’m trying to become unique. But when you taste it, tears may come out of your eyes because it might be very nostalgic for you flavor-wise,” Lamont says.

The Jerk Shack’s chef developed a love for food and cooking years before completing his culinary education at Le Cordon Bleu. Lamont grew up in Seattle, where his single father raised him to appreciate the diversity of delightful tastes offered by the world’s cuisines. “He was a military kid and traveled the world. I think with that, and his coming from New York City, it allowed me to develop my palate from the things he liked as a kid.”

Chef Lamont’s dad also worked at the Sheraton Hotel in Seattle and tutored refugees on becoming citizens. He let his son hang out in the hotel’s kitchens with banquet chefs from the Caribbean, India, China and other countries. Lamont started applying what he learned to the preparation of family meals at home. “Living here in Seattle and working not too far away from the Pike’s Place Market allowed me to go into the market after work every day and choose whatever I wanted to eat or cook for the family.”

While he spent his teen years shadowing international chefs, Lamont’s earliest memories of cooking come from his grandmother’s kitchen. They shared a special bond that made him the only one among his eight siblings that she allowed to cook with her. “I was able to sit there at the counter and help. I would taste the batter or beat the eggs and watch every step. That was special.”

Lamont uses much of what he learned in those early years to make the Jerk Shack a popular dining destination. For him, that means serving dishes far superior to the “okay food,” so many Americans have gotten used to eating. “Most places out there are not doing things from scratch anymore,” says the chef. “If the majority of places aren’t doing that, then step outside of that box, and you will become special and unique.”

The Jerk Shack’s brunch and dinner menus offer Lamont’s signature approach to some popular Caribbean dishes. The Half a Jerk Fried Chicken is a different take on the spicy bird that is most often grilled or smoked. It is also gluten-free with no flour or batter coating. “When you get the jerk chicken here, it’s done with our dry rub. It’s not marinated. It’s seasoned with our dry rub spice, but it is brined so it won’t be dry ever,” says Lamont. The dry rub coating makes jerk fried chicken crispy and crunchy. It comes with fried plantains, pistachio-topped rice, shaved cabbage slaw and house aioli.

Other favorites at the Seattle restaurant include the jerk smoked ribs, jerk mac and cheese, and the coconut milk caramel bread pudding with homemade honey vanilla ice cream. “The jerk fried chicken is my favorite. The Caribbean burger is my second favorite and one of the best burgers I’ve ever had,” Devine says.

Lamont’s business partner declares the brunch menu’s fried soft shell crab Benedict on a cheddar jalapeno biscuit with avocado hollandaise as his newest favorite. He stays out of the kitchen but enjoys the benefits of working with a creative chef. “One of the great things is that when Trey is experimenting back there, I have no problem being the guinea pig and taste-testing some things,” says Jerk Shack’s co-owner.

The two men, who consider themselves to be part of a business brotherhood, complement each other in other ways. Devine handles most of the accounting, logistics and facilities management. Teamwork is an essential part of their strategy for success. “We try to tackle things together, says Devine. “The things that neither of us is too adept at, we make sure that we share that information, so we learn from each other.”

The Jerk Shack’s owners also brainstorm together to create new sources of revenue so that the restaurant’s profitability does not rely solely on people coming through the door. They sell t-shirts, cater events, operate a bartending service, and soon will sell a spice rub. The Jerk Shack has live music on Thursdays. The house band is called Sound of the Shack. “There is one music director, Ricardo Guity. He is a percussionist from Honduras, but he’s lived in the states for most of his life,” says Lamont. “I call Ricardo my uncle because he is my father’s brother in music.”

The restaurateurs promote that same sense of family through their partnerships with other local businesses, including Boon Boona, an Ethiopian coffee shop. The restaurant’s on tap beer is produced by Seattle’s only Black-owned brewery. Lamont and Devine have partnered with Metier Brewing on the release of Black Stripe, a new canned beer, and the first distributed by the brewery. “When you are intentional about supporting other Black-owned businesses, and not just on the retail side, that makes a huge difference,” says Devine.

As the grandson of a Charleston businessman, Devine’s entrepreneurial spirit could unite the two partners on another shared mission. They both had youthful dreams of owning a chain of restaurants on the West Coast. Both men hope to expand the Jerk Shack’s presence in Seattle before exporting their brand of Caribbean cuisine and hospitality. “That is the enjoyment, right? Seeing people have a good time, especially in a Black-owned establishment,” says Devine. “Seeing people being able to let down their guard and really enjoy the moment with family and friends. It’s just a good vibe. It feels good.”

Chef Lamont echoes that thought with his explanation of what inspires him to want people from Washington to California to dine on his style of Caribbean cooking. “It is instant gratification when you see a person taste your food for the first time, and you see the light in their eyes change. They are happy, like genuinely happy.”

The Jerk Shack’s chef-owner has a new vision for adding more joy to people’s lives. Lamont started a GoFundMe effort in June to raise money for a Jerk Shack II. The shipping container structure would provide support for minority residents in a South Seattle community. The restaurant’s website explains the goal: “Jerk Shack II would help us achieve the scale we need to serve the community by providing our employees with health insurance, child care assistance, tuition assistance and college scholarships.” Lamont has raised more than $79,000 for the $700,000 Jerk Shack Seattle Land Fund.