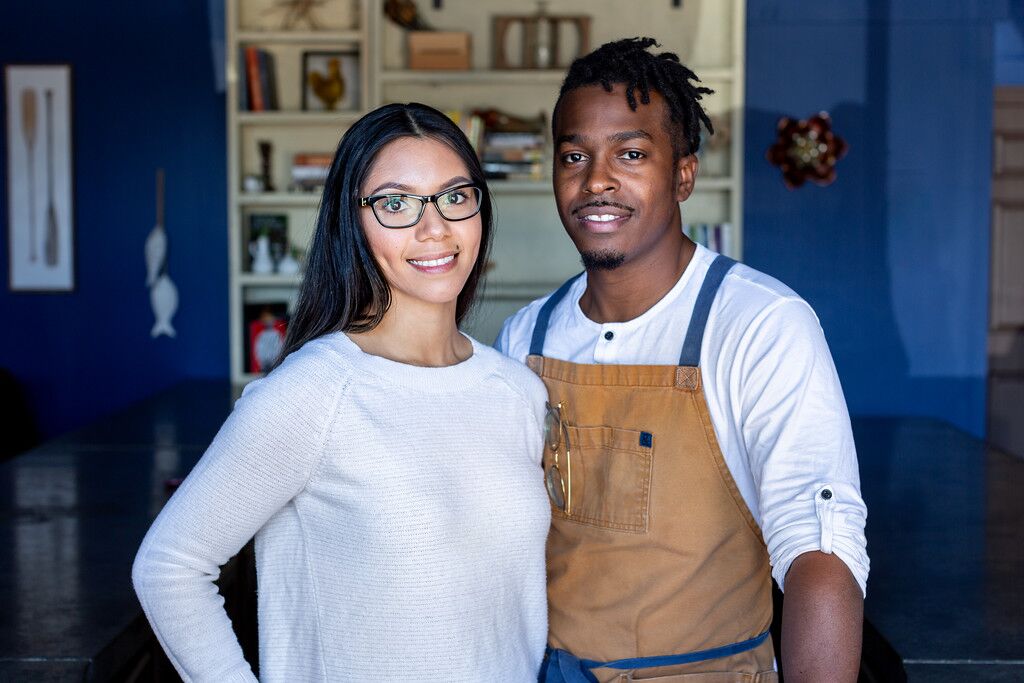 Days before the worldwide COVID-19 outbreak began, an award-winning restaurant in Houston was preparing to close for spring break. Indigo’s owners were all set to travel to Lagos, Nigeria for a cooking engagement. Those plans got shelved and the restaurant Jonny and Chana Rhodes opened to national acclaim in 2018 fell off the list of most sought-after reservations in town.

“As a restaurant made on reservations, we suddenly stopped getting them for later in the spring and summer after the first week,” says Jonny. Stay-at-home government orders soon halted dine-in service across the U.S. That prompted the James Beard Rising Star semifinalist and his wife to execute Plan B.

They decided to move forward on another vision ahead of schedule, according to a press statement. “In the wake of COVID-19, chef Jonny Rhodes will pivot completely from service at his neo-soul restaurant Indigo in order to provide his greater community with food utilizing a different avenue — a self-sustaining grocery store.”

Launching a Vision During the Pandemic

While many restaurateurs were shifting their operations to takeout, pickup and delivery, Indigo’s staff got to work preparing for the opening of Broham Fine Soul Food & Groceries. “We’re actually not taking any to-go orders or delivery. We’re simply taking our inventory and becoming a grocery store concept,” Chef Rhodes says.

RELATED: Chef Jonny Rhodes: Food for the Mind, Body and Soul at Indigo in Houston

The chef and his wife, who is Indigo’s general manager, opened the market April 1 in the Trinity Gardens community of Houston. The transformation of the restaurant’s operations put in place a concept the couple had in mind for months. “While unprecedented, the city-wide dine-in ban served as a push the Rhodes needed to get the grocery wheels turning sooner rather than later as Rhodes and his team have been preparing for a situation like this for more than two years,” the press release states.

The 2,000-square-foot store on Bennington Street sells food based on Indigo’s culinary focus and the palates of people of African heritage who love soul food. The assortment of groceries sold at Broham’s is pre-prepared items shoppers will not find on any other grocery shelves such as Indigo’s signature preserves. The restaurant had some 40 varieties of preserves before the pandemic hit.

The Rhodes pushed up the opening of Broham to make wholesome food available to people trying to keep their families fed during the COVID-19 crisis. Many of the provisions on Broham’s shelves are not purchased from large food producers. Jonny and Chana make the savory items and a pastry chef assists with desserts and baked goods. A provisions list from the press release includes deli meats, dried foods, fresh pasta, sausages, sauces, broths and stocks, condiments, jams and jellies, pastries, ice cream and beverages.

“In addition to the list of items the Rhodes will sell and make within the Indigo kitchen — which will allow him to continue supporting his staff — Broham will sell fresh produce from Indigo’s garden and farm. In the beginning stages, the team plans to supplement whatever can’t be produced themselves with produce from local farms,” the release states additionally.

The garden for the store is still in the works. Eventually, the couple plan to make the market 100 percent self-sustainable. They hope to be the farmers providing the produce and the cooks making all the pre-prepared foods.

Other restaurants in Houston and the nation’s major cities are selling groceries to make it through the coronavirus crisis and help local residents get food. The governor of Texas issued a directive allowing restaurants to sell bulk food items and dry goods to the public. An article in the Detroit Free Press says, “As the COVID-19-caused economic fallout for the hospitality industry grows, some restaurants are turning to sales of grocery and pantry items as a potential lifeline that also fills an essential need for the community.”

Jonny included lectures on “food insecurity and unpreparedness within times of disaster” during dinner services at Indigo. He sees tough times ahead for Black food purveyors unless the federal government helps small independent businesses recover from the impact of sheltering-in-place orders. “I think the impact won’t come from the virus directly, but the aftermath,” says Indigo’s owner. “We already can’t get loans and investors will be hard to come by in the coming economy. The pivot to agricultural products should be a smoother transition than closing. Being that they already have kitchens and equipment.”

The innovative restaurateur advocates for a different approach to feeding people and preparing for any future crises. The chef encourages other restaurant owners and chefs to focus on planting and growing food. “I most definitely believe the government should bail out everyone. But I cannot confidently say that I think the focus should be to rebuild or reopen a restaurant,” he says. “We’re agriculturally exposed and when borders shut down, land inequities will only exacerbate hardships when agricultural crises arise.”

The national “Best Restaurant” accolades Indigo received from Food & Wine and other publications have been replaced with a COVID-19 notice on the website. It tells patrons no reservations are being taken until further notice. Indigo was set to reopen in September before the pandemic broke out. Now, the owners are asking people to support Broham Fine Soul Food & Groceries while considering the strategy of owning land. “Land, give us land. We cannot feed our people without land,” Chef Rhodes says.

The new market is adhering to COVID-19 safety measures. Transactions are cashless and space is limited to eight patrons shopping at one time.