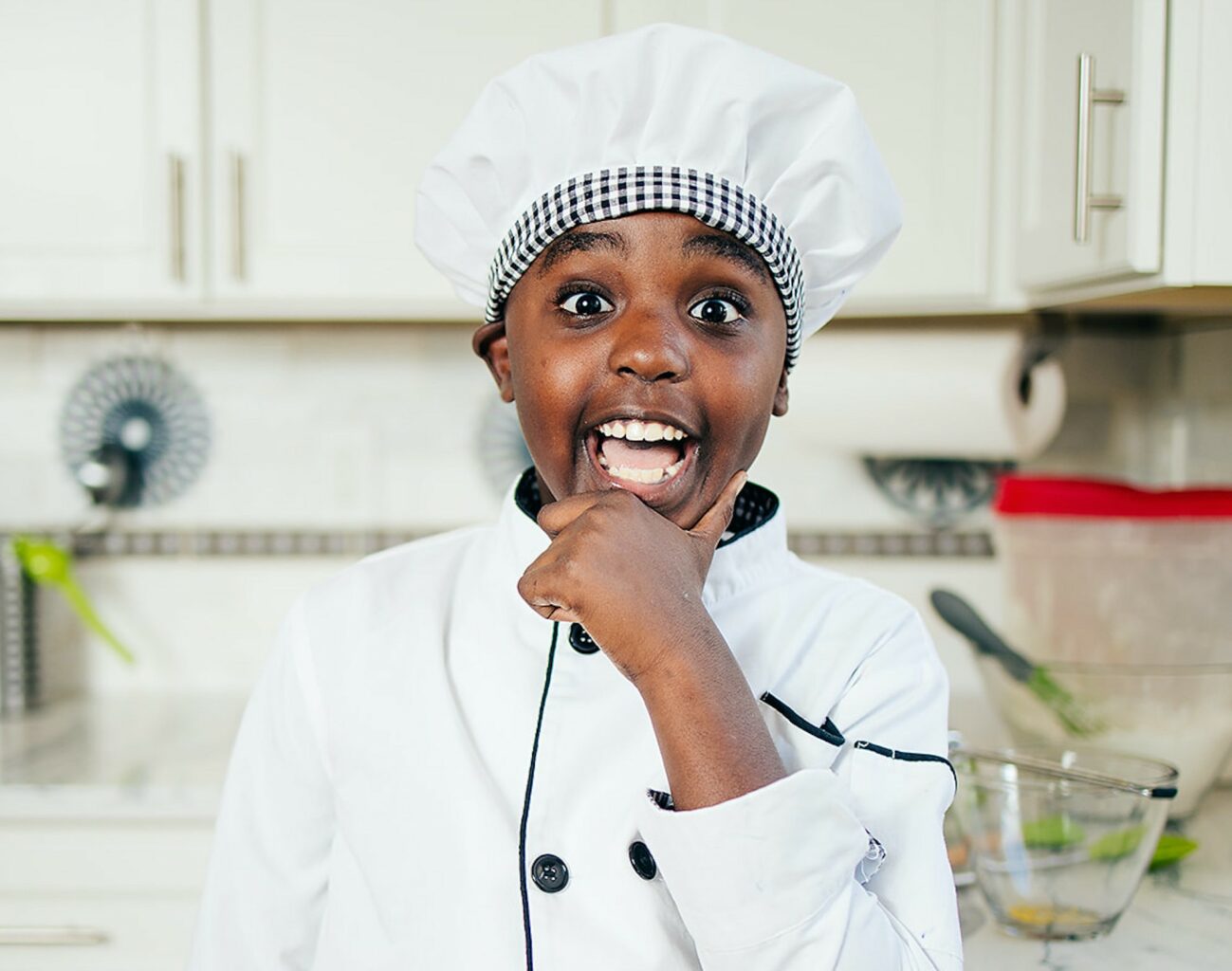 The young pastry chef aspires to have his own line of products for all to enjoy.

Identifying one’s budding talents right as they sprout and providing an opportunity for them to bloom to full potential can often mean a long-winding road, but not in the case of Jordan Legend, baking enthusiast and young entrepreneur.  All of 10 years old going on 11, the natural talents of the future chef from Atlanta, Georgia in the kitchen are to be admired. “You can’t keep him away from the kitchen,” says proud mom Charlene Legend, as he spiralizes zucchini toward meal prep for dinner ahead of his interview. “It’s not his project but he took it from me, and I willingly gave in!”

The youngster expressed an interest in baking at the tender age of seven. He is in the fifth grade now at Burgess Peterson Academy in East Atlanta where he lives with his family. What started as a hobby has turned into a small business of sorts, Sweat Treats by Jojo, with the young chef receiving orders online from social media and through his family website. All the cakes are lovingly baked at home.

“I was interested in baking for as long as I can remember,” says Jordan. “Because my dad and grandma like to cook, so I learned watching them.” Recognizing his interest in the culinary arts, his parents enrolled him in several cooking classes, one of which was at Atlanta’s Young Chef’s Academy, where he attended for about a month. “On my first day there, I had to learn how to bake a scone and they gave me a little binder so I could have all kinds of recipes in it.”

RELATED: Autism Influencer and Baker, Jeremiah Josey, is Inspiring Kids Around the World

Jordan shares the classes were “Super cool. I learned to make caramel apples.” This further piqued his interest, resulting in hours of watching YouTube videos, especially the Preppy Kitchen channel, for ideas and inspiration. “That’s where I first learned to make apple pies and blueberry pies and to decorate cakes,” he shares. Among his favorite things to make is blueberry lemon-glazed scones and he loves receiving cookbooks to refer to for recipes.

As mom Charlene points out, “He is only 10, so a professional can probably do what he does faster, but really big projects take him multiple days. He gets pretty complicated cake designs for orders that he never turns down.” A recent llama cake request had Jordan challenged, but he took it on and a few versions later (he is a perfectionist, says Charlene), he finally made one he liked. Pictures and videos of the work in progress received much attention online.

The learning isn’t without its hiccups. His progress and small wins can be viewed on his Instagram page. One thing Jordan is trying to get better at is making sure the icing won’t melt while it’s still getting done and turns out smooth on the final product. Charlene shares how he is sometimes frustrated and will dispose of a 2 or 3-layer cake if the icing isn’t achieved just right. But his big question always is, “How does it taste?”

“Everything he makes is so delicious, it’s ridiculous,” says Charlene. “I love the donuts. They are from scratch, so it takes hours. He activates the yeast and it has to rise and then [he] rolls it out, so you can’t eat it the same day, but he makes all the flavors.”

Parents Karlief and Charlene both work in the local film and television sector and saw Jordan’s interest truly gain momentum about a year and a half ago.

The passion does come with its price, though, in this case a financial consideration. “We have many kids, so we couldn’t financially keep up with the cooking classes,” shares Charlene. Jordan has a twin sister and two older siblings. “What we committed to doing was if he wanted to cook something, then we wouldn’t stop him. It was a financial commitment for us because it gets really expensive. This is probably the most expensive hobby anybody can have.”

Forging Ahead to Success

Jordan’s current focus is to win the Food Network’s Kid’s Baking Championship. He almost made the cast last year but had to forego his participation — his family was on Paramount Network’s show “Wife Swap.” Though he interviewed for the baking show and got far in the process, his contractual release couldn’t be negotiated at the time. Now his goal is to be able to make it back on the baking show to show off his cooking chops.

In the long run, he wants to have his a line of baking goods and accessories featured in major retail stores all over the country. He also wants to partner with Children’s Hospital of Atlanta so children in need can benefit from his success. “He talks about wanting to go to pastry school in Paris, have his own restaurant, a line of products in Walmart.  He has these little cute goals that I see him sticking to,” says Charlene.

As for whether he will continue to pursue his interest in the culinary world well into the future, Charlene is optimistic. “He likes to cook, so this is very much a Jordan-driven thing. I’ve never seen a kid so skilled and passionate. We have four kids and all dedicated to different things, but I’ve never seen one that is a magnet to his skill like he is. I want this to be fun for him. I love how excited he is and want him to keep that passion about it.”