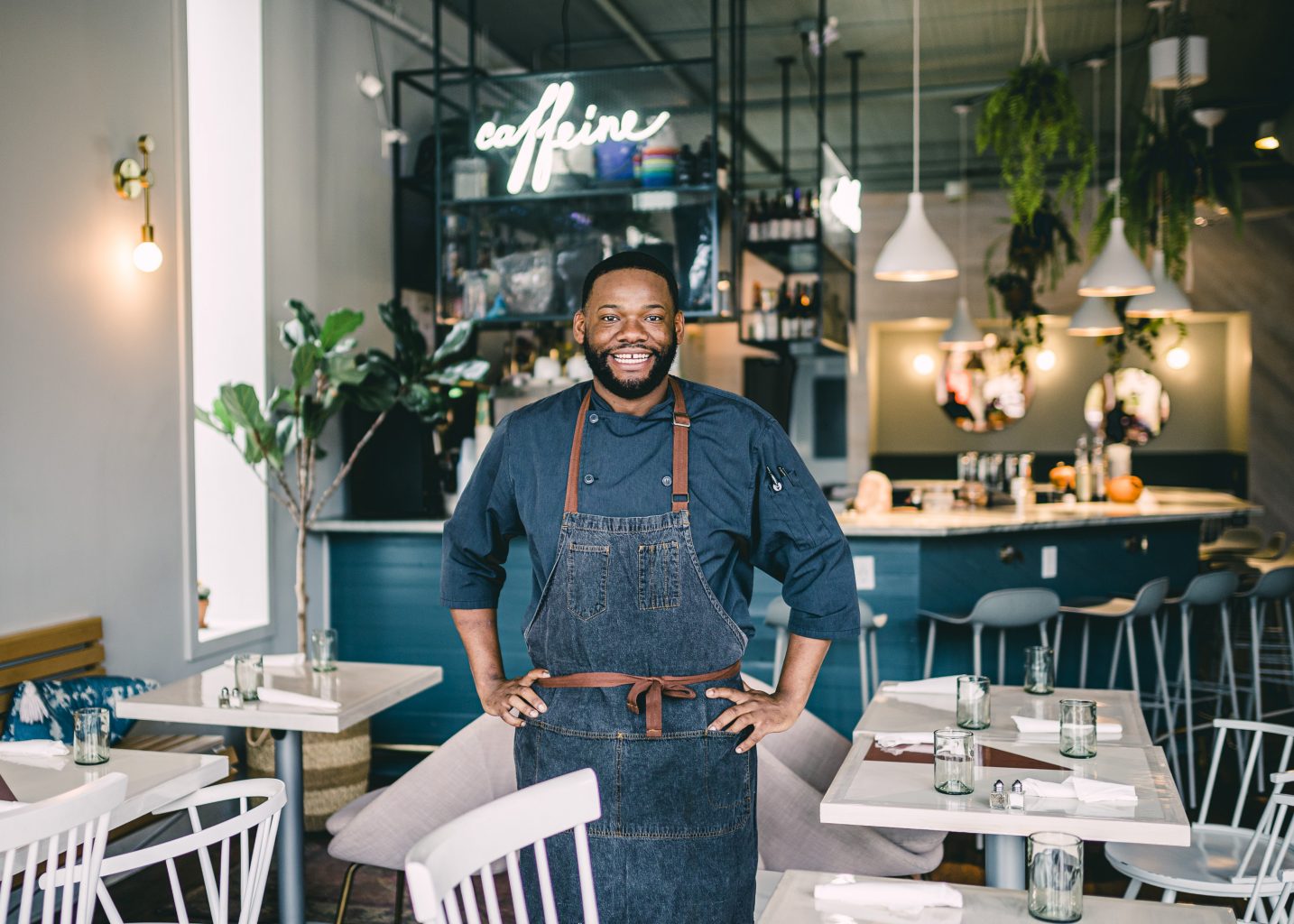 Next time you visit Louisville, Kentucky, you might want to look up chef Kendell Sheppard. A native of New Albany, Indiana, Sheppard has been slowly but surely making waves and winning awards for his culinary prowess as executive chef of the acclaimed Brooklyn and the Butcher.  The restaurant was voted Best New Restaurant in 2017 by Louisville Magazine for its steaks and small plates served in a fine-dining ambiance. The modern steakhouse, owned by local Brand Hospitality Group, has been instrumental in revitalizing the historic downtown area and received accolades for pushing the envelope with its concept and cuisine. For Sheppard, who worked at The Exchange Pub & Kitchen prior to this position, that experience has been a fulfilling stepping stone.

Transitioning to a new venture is always exciting. For Sheppard, that entails moving on from Brooklyn and the Butcher to become the new executive chef at Louisville’s Naive, a concept that zeroes in on organic food, local farms and catering to those with dietary preferences or restrictions, including vegetarian and vegan options. It’s certainly a far cry from his prior restaurant’s “meaty” menu. “But it’s something that has always been within me,” he says. “Every restaurant menu I made always had a vegetarian or vegan option to cater to those people because it’s a small demographic.” The move is also fueled, in a way, by his own change in dietary habits. “When I was younger, I went vegan and vegetarian for a few years. I’ve always been in on nutrition and health, but now I’ve matured in my mindset. I want to showcase vegetables and healthy cuisine, and have found a platform in Naive.” He hopes to take the restaurant’s menu up a notch as not just one of the best vegetarian restaurants in the city, but one of the best restaurants overall.

RELATED: Chef Jonny Rhodes: Food for the Mind, Body and Soul at Indigo in Houston

RELATED: From California to The Gambia: Couple Opens the Country’s First Vegan Eatery

Sheppard’s love for cooking comes from large family gatherings as a child (his grandparents had 18 children). His grandfather had a garden, so the cultivation of vegetables was something he knew as a teenager. His father was a professional cook, despite never going to school for it or working in the high-caliber kitchens that Sheppard has. “He was my guy who I went to when struggling as a young sous chef,” he says. Sheppard also had the opportunity in high school to work with television personality and restaurateur Guy Fieri, who was doing a roadshow in the area. “It was my first exposure to anything like that. I learned a lot. I was around 18,” he reminisces. “We were a group of five students. I don’t know how much help we were, but that’s where I really started catching the spark.”

Another highlight was a chance to meet and work with southern cooking show host Paula Deen at Horseshoe Southern Indiana Hotel & Casino, one of the bigger entertainment spots in the area where Sheppard got his first job. Those experiences equipped him well for his time in Oakroom at the Seelbach Hilton in Kentucky, where he worked under chef Bobby Benjamin, whom he counts among his mentors for his business acumen. Another mentor is Ian Hall, a partner at Brand, who is knowledgeable in the restaurant and business space. “He’s the main reason I’ve been at Brand for eight years,” admits Sheppard. “Working with both helped me get my name out and experience different things.”

Performing at the executive chef level has provided Sheppard with a bird’s eye view of the industry over the years and the role of the Black community. “The industry is changing, there’s a little more acceptance and people are starting to appreciate Black chefs more,” he shares. “My dad was a cook in the 80s and 90s and I heard stories from him. I’ve experienced stuff that maybe wasn’t the best situation, but that’s life in America.”

For 2020 and beyond, Sheppard already has a few big personal catering gigs in the works and is looking forward to starting at Naive this month. The team there is smaller, and the company is less than two years old but located in a bigger market. “This is really good for me to be the number one guy in the business that’s helping them move in the direction they want,” he adds. His favorite part of the whole process is seeing people grow. “I’m focused on building my team and trying to get everyone else to the level that is the best we can do. We are a team together, so let’s move together in the same direction.”

Sheppard recently earned his real estate license to become a real estate agent. Though always interested in that sector, he never completely pulled the trigger but finally decided in favor of planning for his future, one that includes possibly owning his own restaurant space someday. Additionally, Sheppard wants to establish a nonprofit. Giving back has been part of his upbringing since he can remember. “I do monthly soup kitchens. It is part of my heritage,” he says, speaking of his grandparents. “My grandmother was a pastor. She fed a lot of people and had food pantries. Now I am helping a group of churches, feeding the community free hot meals every Wednesday.”

On his journey as a Black chef, he says, “You can’t stop your dreams or what you want to do for someone else. I’ve never thought about it where it was going to stop me getting what I want or where I want to get to.” For others in the industry, he adds, “It’s a process. It starts with the education of staff, teaching them more than just to do their jobs, and to grow for other opportunities down the line.”