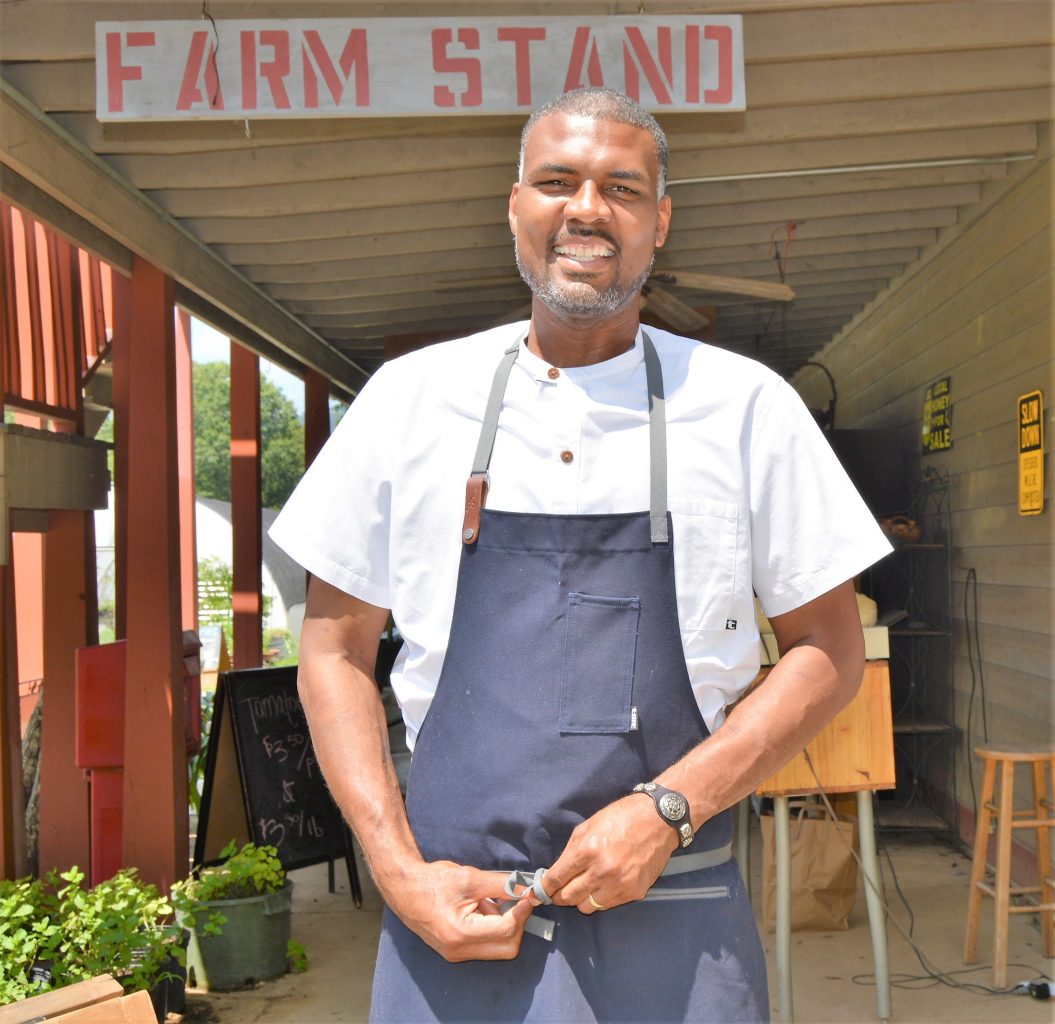 Preserving and celebrating one’s food culture, history and traditions is a labor of love and learning. For chef Kenyatta Ashford, owner of Neutral Ground in Chattanooga, Tennessee, and host of the 4 Courses And supper club, it is part of his life’s mission. In opening his own restaurant on Juneteenth this year, Ashford has relied on the memories of his youth. In the supper club, he builds upon the memories of those who came before and lays the foundation for generations to follow. Spurred by both, he advocates for native cuisine with his culinary efforts.

A casual dining concept inspired by his youth growing up in New Orleans, Louisiana, Neutral Ground is a tribute to the run-of-the-mill places where Ashford would get sandwiches while growing up. “I would spend time eating a shrimp oyster po’boy or roast beef po’boy, so that was the idea that I took to establish the concept,” he says. “Also, yakamein. Before the ramen craze, it might have been a harder thing to introduce to the public outside New Orleans. Now that people are so familiar with ramen, yakamein is something that people would be easily accepting of.”

Po’boys are traditional sandwiches made with meat and locally baked French bread in Louisiana. Yakamein originated in New Orleans’ now extinct Chinatown that was established by Chinese immigrants. The Chinese noodle soup was adapted to suit the tastes of local clientele over time. “The concept is reminiscent of those spaces, and I wanted to pay homage, do a really nice version to honor those foods,” says Ashford. The restaurant, in fact, gets its name from the 1800s when the central median of Canal Street in New Orleans, with French Creoles on one side and Anglo-Americans on the other, was declared the Neutral Ground.

Now open for takeout, delivery and offering patio seating, the restaurant is located in the historic part of downtown Chattanooga, inside the Proof Bar and Incubator, a collaborative community for food and beverage professionals. Ashford is one of several occupants in the building – other businesses include Poppytons Patisserie, Lil Oso and Lolo Bars — which has a commissary kitchen he works from on some of his top offerings such as house-made Louisiana hot sausage po’boy and smoked brisket meatball yakamein.

Ashford also hosts a supper club as an extension of his culinary pursuits. 4 Courses And —the “and” referring to a specific topic of discussion for that edition — is held three to four times a year, bringing together the nation’s most celebrated Black chefs. The last event held in May was 4 Courses and King James with Gullah Geechee chef BJ Dennis. The next event is September 13, titled 4 Courses and Whiskey Supper, featuring an all-female lineup with culinary creations from the James Beard Award winner chef Mashama Bailey, “Master Chef” finalist Tanorria Askew and Ella Livingston of Cocoa Asante. Ashford has partnered with Uncle Nearest Premium Whiskey and Victoria Eady Butler, the first Black American female master blender, to pair cocktails for each course. The event will take place on September 13 virtually with prepared courses and cocktails available for pickup prior to the live stream featuring a conversation with all the chefs sharing how they incorporate their Southern roots in their work. Proceeds benefit a local high school’s culinary art program.

On why he began this initiative, Ashford says, “There’s a need for it because people like myself or chefs of color don’t necessarily get recognition or get their stories told as often as our counterparts, to highlight and pay respect to our forebearers of the cuisine that we treasure so much, and push it forward and create a new narrative. Or continue the narrative for the generation behind us so they can have some people to look to for inspiration and the desire to do something similar to what we are doing right now.”

Now 44, Ashford began his journey in the culinary world when he was 27. A teacher in his previous life, he realized being an educator wasn’t something he was in love with. Food is what he was drawn to and felt he had some talent for. He quit his teaching job and moved with his wife and child to Hyde Park, New York, to attend The Culinary Institute of America. After several work experiences across New Orleans, New Hampshire and Rhode Island, Ashford landed a role at Read House Hotel. When furloughed as a result of the pandemic, he took the opportunity to put in place the foundation for his own business.

A recipient of the Jean-Louis Palladin Professional Work/Study Grant by the James Beard Foundation, Ashford visited Ghana and Benin to study the cuisines West Africa and their influences on the African diaspora. “It’s the one thing that’s gotten me to where I am right now in how I cook and share more of our story, and I’m beginning to be more comfortable with reaching into that chest to pull out ideas of things I want to explore as far as food,” he says of his experience.

“I am inspired by the ingredients, the cooking, how it influenced other cuisines, and how I see what I saw in West Africa in the food that I grew up eating, to see similarities in techniques and draw some parallels between the dishes.” He also went to Charleston, South Carolina, and Savannah, Georgia, exploring the low country with chef BJ Dennis as his guide. “I got to see first-hand some of the treasures from his point of view, such as garlic crab and different versions of red rice.”

Up next, Ashford is trying to secure capital to further his business at the incubator, expand hours, hire more employees and explore finding his own brick and mortar location. He adds, “It’s an extremely demanding field, especially if you have ambition. I’m a pretty intense guy when it comes to wanting to do things a certain way. I want to do well and be exceptional.”

Tickets to the upcoming 4 Courses And Whiskey Supper on September 13 are available on Eventbrite.