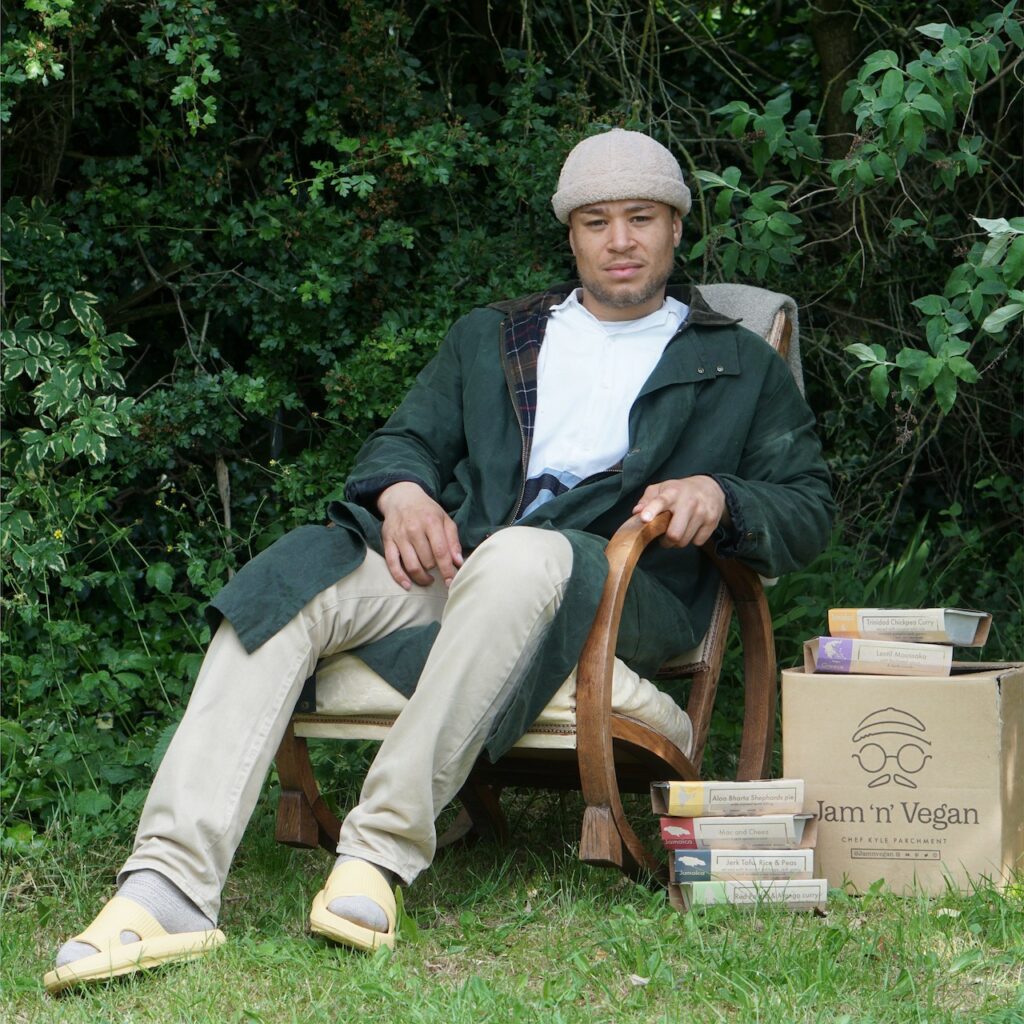 “Travel changes you. As you move through this life and this world, you change things slightly, you leave marks behind, however small. And in return, life and travel leaves marks on you.” – Anthony Bourdain

These words from one of the industry’s most beloved chefs, Anthony Bourdain, are as powerful today as they were when he said them. The mere act of leaving a familiar place for one that is new and unknown has a way of changing how you think about life as well as how you’re moving through it.

Travel certainly did that for Birmingham-based vegan chef Kyle Parchment, who, together with his “other half,” aka his girlfriend, left the U.K. to explore the world for an entire year.

“Traveling had a major change in my life, from my mindset in general. Just to have that period alone and see so many cultures and so many different cuisines. And I think even then it kind of like solidified that I really like food and I really like cooking,” he says.

Before leaving on the life-changing exploration, Parchment says he was jumping from job to job, working in factories, and doing delivery work as he saved for their travels and prepared himself to pursue a degree in physiology. The goal was to travel, reset and come back renewed for the next chapter of his life.

Although he returned ready to study how the human body works, it would be the science of cooking that would charter a different path than the one he was planning.

Fiji, Indonesia, Thailand and Japan were just a few destinations that provided grounded experiences that continue to shape who he is and the life he lives today.

“The world is just incredible, and New Zealand for me was the place we visited first and it still got like a major place in my heart. And I think it’s just because it’s a vast place that is underpopulated, and they really look after their land. They look after everything that is there, everything is protected,” he says about the 2016 journey.

“What I found mostly when I was traveling is that people enjoy and are happy with what they got. And they make the best of what they’ve got…I just noticed that in all of these places, if they had each other and they could eat, it was more than enough.”

The awareness of a life that focused less on consumerism and more on appreciation followed Parchment back home. As did his decision to fully embrace a plant-based lifestyle that was already in the works as he moved from being a pescatarian and then a vegetarian. “I made the transition through traveling that I was going to be vegan when I came back,” he shares, saying this was always the goal.

Dishes experienced in Asia introduced him to new ingredients as well as new dishes that would later be added to his Caribbean palate. “When I started to go through Southeast Asia and India, etc., I was never going back because I experienced some of the best foods in the world in a vegan way.”

There would also be a transition for family and friends as Parchment stayed committed to his decision which now went from eating traditional Jamaican meals with meat to just fish and then eventually, only plant-based.

“Everyone has their punch at you at the beginning, and then it starts to be, ‘No really, why are you doing this?” Is there a benefit to it? What do you eat?’”

Curious about his new lifestyle, when Parchment answered questions from friends and family about what he was eating by sharing one of his dishes, he was in no way prepared for the reaction he would receive.

Going vegan meant Parchment was pretty much on his own when it came to cooking.  While some of the dishes he grew up eating in his mother and grandmother’s Jamaican kitchens easily became the basis for his go-to's, inspiration from his travels and different cultures also fueled a new passion for food and cooking.

“Cooking for me was never really a choice in a sense when I was growing up. It wasn’t really the cool thing to do. It was something that I revisited later in life. It is something that I felt was ingrained in me. Something I always felt I had a passion for, but it was kind of like suppressed in a sense,” says Parchment.

Following his travels, Parchment started the course work for his physiology degree, which proved to be intense.  Not able to work full-time due to the demands of his studies, he set out to find some type of employment on the weekends that could at least help pay basic living expenses.

“I was cooking for myself, and I had a couple of friends ask, ‘What are you eating as a vegan?”’ His answer: chickpea curry, rice and peas, jerk tofu with plantains and coleslaw. “It was kind of my happy place as I started my journey.” It would soon be theirs too.

A request to try some of Parchment’s food one weekend led to another request the following weekend and the next weekend and so on. “They wouldn’t even wait to get home. They were eating it outside my house and giving me back the container, and just be like, ‘Okay, I’ll come back next week and I’ll have the same.”

They took it beyond sharing a meal by a friend to posting it on Instagram, which generated inquiries from others wanting to experience Parchment’s “happy meal.” Surprised by the response, Parchment thought this was the opportunity he was looking for. He could sell five to ten meals each weekend and still fulfill his degree at the university.

Six weeks after the initial meal shared with friends, Parchment says he had six different meals, three desserts, side dishes and sauces.

Heard it Through the Grapevine

Now in full cooking mode every Friday, Saturday and Sunday out of his mother’s kitchen, Parchment built a steady clientele and adapted to his duo responsibilities as a student and part-time caterer of prepared meals.

His trajectory would change once again after a call from a professional soccer player from Aston Villa who had heard about the meals, wanted to place an order and have them delivered to where he was in London. The other thing is that this was over two hours away and out of Parchment’s service area. Serious about trying Parchment’s meals, he offered to send a taxi or Uber to pick them up.  A friend heading that way delivered them instead. From that one player, Parchment started preparing meals for other players as word continued to spread about these delicious plant-based meals with a Caribbean twist.

Decision day ultimately came after receiving an offer of a lifetime. A player on the Arsenal soccer team, a team Parchment supports as a soccer fan, reached out with an offer for personal chef services three days a week as he looked to go vegan. In disbelief at what was happening, Parchment says, “Meanwhile, in my head…’What’s going on?’ I don’t know what just happened within the space of me just cooking for my friends to this to that to this to having this opportunity to cook for [this player.]”

Not letting this opportunity pass him by, he put his studies on hold and went for it.

Expanding the Brand and Possibilities

He asked Parchment where he wanted to take the company and brand now called Jam ‘n’ Vegan, named after his Jamaican heritage and vegan lifestyle. “My dream is to do vegan boxes that I could send out to people and make their lives easier because I know how hard it is to prepare and make sure you got the right proteins and micro-nutrients in your meals.”  That information was all it took and to Parchment’s surprise, he now had an investor to help bring his dream to pass.

Jam ‘n’ Vegan, as a commercial vegan meal kit company, officially launched this past January, which is also known as Veganuary. Offering “culture in a box,” the chef-made meals are prepared by Parchment and flash frozen to keep them as fresh as possible.

A new website boasts the ease of having meals delivered right to your doorstep weekly, along with a tease of what’s available. The hard part is picking which meals to order. With a total of 12 to choose from, perhaps start with Parchment’s flagship meal, jerk tofu with rice and peas and cabbage, followed by the rasta pasta with coconut sambal and East African bean stew with jollof rice.  Order once, or better yet, get a subscription so you know without a doubt you’re covered.

Kits are available with six or 12 meals that can be enjoyed for up to six months. Another bonus about Jam ‘n’ Vegan’s expansion is that delivery is now available throughout the U.K., making the meals more accessible.  Adding more meals to the menu and introducing morning and mid-day snacks and lunches are on the vision board for an appointed time.

Of course, those outside the U.K. are chopping at the bit to join the Jam ‘n’ Vegan club of customers, but for now have to be satisfied with photos of the meals and raving reviews.  When asked about expanding internationally, he says, “That is a massive like milestone within this journey. It is definitely something I would really love to do, get overseas and do whatever I could possibly do to make this brand and me bigger.”

Well, now that it is out in the universe, we can just sit back and watch it happen.

Check out Parchment and Jam ‘n’ Vegan meals kit service at www.jamnvegan.com and join the fan club on Instagram by following along at @jamnvegan.