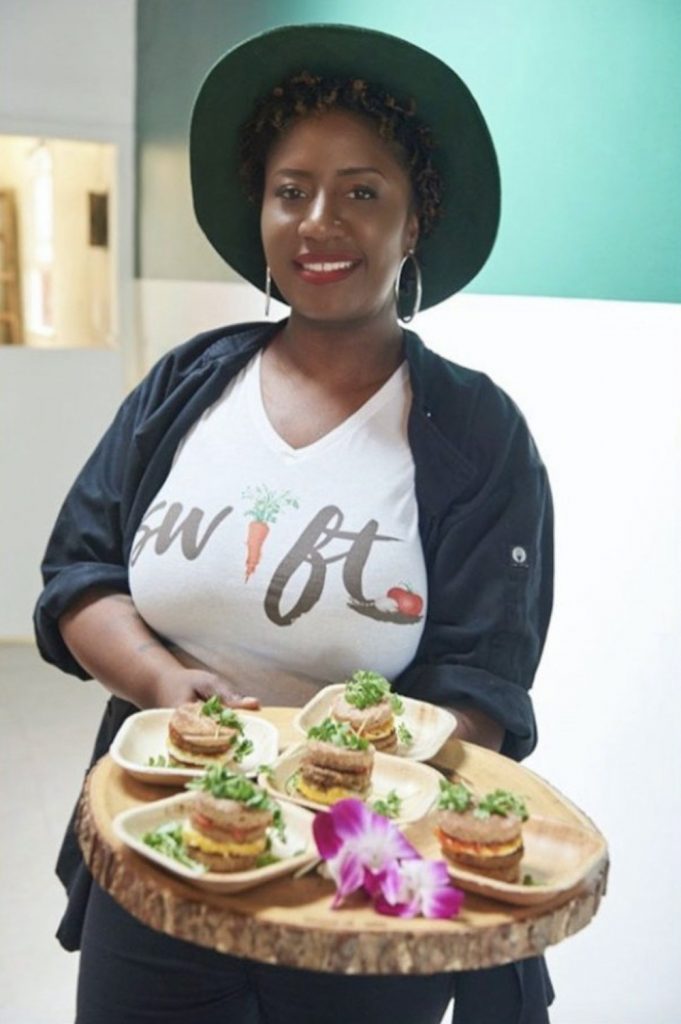 Scoring an Oprah Winfrey Vision 2020 tour pick, the healthy chef is ready for the next chapter.

For most of us, the mere mention of a celebrity like Oprah Winfrey visiting where we live would be cause for excitement. Imagine finding out your restaurant could be one where she might stop in for a bite? The anticipation is palpable in chef Kyndra McCrary's voice as she recounts her memory of how it all unfolded. Her restaurant, Swift Café in Los Angeles, California, has only been open a few months and has already been chosen as one of only six restaurants in the Los Angeles area to be featured as part of the 2020 Vision: Your Life in Focus tour with Oprah Winfrey and Weight Watchers. The restaurant offers healthy food choices to the community, inspired by McCrary's own health journey and her decade of experience in the hospitality industry.

McCrary started her love affair with the culinary world formally when she established Ooh La La Catering in 2008. But she didn't intend to be a chef. With a degree in counseling and a background in sales, she wanted to start a nonprofit geared toward helping troubled teens and adolescents. She knew independent hours and income were necessary to accomplish that. “I was trying to think about what I love to do and I always loved cooking,” she says. Her inspiration was her Panamanian grandmother, whom she watched cooking growing up. She wound up in culinary school at Le Cordon Bleu (Hollywood) and knew on the first day of class it was where she was meant to be.

“I was like a kid in a candy store. It was so exciting for me to see different ingredients and dishes,” says McCrary. “I was in love.” She started the catering company while still in culinary school. The name for the business was borrowed from the way her grandma would say “ooh la la.” “I wanted a name that makes me think of my grandma and her face when she was saying it. That’s how I want my customers to look and think.” Since her first catering gig in December 2009, McCrary has cooked for celebrities, events, commercials and more. She shares, “It has been a very full, eventful decade of catering for me.”

A brick and mortar location as a financially smart move to have her own space had been on McCrary’s mind since she began catering. A previous experience owning in Inglewood had proved a disappointment. Wiser from that detour, McCrary was ready to embrace a new opportunity in Leimert Park, a historically African American neighborhood. She reports a good community response despite being in an area with a lot of gentrification and construction. With a small team of six, McCrary also manages her catering clients and other business through the same kitchen.

“Being in culinary school opened my eyes to a whole different genre of food. It brought forth diversity and I learned different French techniques I would have never learned otherwise,” says McCrary. “It really has shaped me as the chef I am. It excited me about traveling, so I have been to 14 different countries and all of that is what I incorporate into my menus. When people ask me what’s your specialty or theme, I tell them its diversity.” Her unique heritage of African, Irish, Panamanian, Jamaican and Native American also contribute to her style and menu choices.

Being in Los Angeles has helped McCrary cater for a few choice projects in the entertainment industry, including music producer Rodney Jerkins aka Darkchild, Riveting Entertainment, where actor Larenz Tate and singer Chris Brown are on the board.  Her clientele also includes the cast of the show “Man Cave” on BET where entertainer Steve Harvey is the producer. However, it was a radio show interview McCrary did that led to the opportunity of being considered for the 2020 Vision tour. The radio host offered her name when approached for referrals and the rest, as they say, is history.

McCrary is understandably delighted for the association with Oprah Winfrey and Weight Watchers this early in her restaurant’s existence. As part of the Vision 2020 tour, Weight Watchers will feature a few items from the menu and Oprah Winfrey will announce the café when she visits Los Angeles for the event. The restaurant was chosen for its healthy offerings and for McCrary, it’s her solution to making healthy food available in the community. “Places in Beverly Hills and West LA have healthy options, but in this community, it’s always fast food or soul food,” she says. “I don’t down soul food, but our communities are dying of heart disease and diabetes because the options are so bad.”

On a health journey herself, McCrary was dealing with a lot of medical issues until she decided to get a nutritionist and trainer last year. “I love food and figured there’s got to be a way to enjoy food and not harm our bodies,” she says. The nutritionist helped McCrary lose 45 pounds and she is still in the process of weight loss. A meal delivery service the nutritionist originally helped create is what eventually shaped into the café she now has. “I am providing healthy options for the community, but letting them see that food can still taste good,” she says. “It doesn't have to be bland or nasty. It can still be full of flavor and not harm you.”

There’s a lot McCrary would like to do in the future, from a possible expansion of the café to bringing back the meal prep and delivery service. “I am a dreamer, I have a lot planned,” she says. That includes doing more within the space itself with spoken word, game nights and speed dating, and to have it be more of a point for community outreach. “I truly love what I do. For me, cooking is more than just making a plate,” she shares. “I make food to invite conversation and bring people together. I want my food to be more than just a meal.”

Swift Cafe is located at 4279 1/2 Crenshaw Blvd. For hours and menus, visit www.swift-la.com. For more information about McCrary’s catering business, visit www.ooh-lalacatering.com/ or follow along on Instagram.