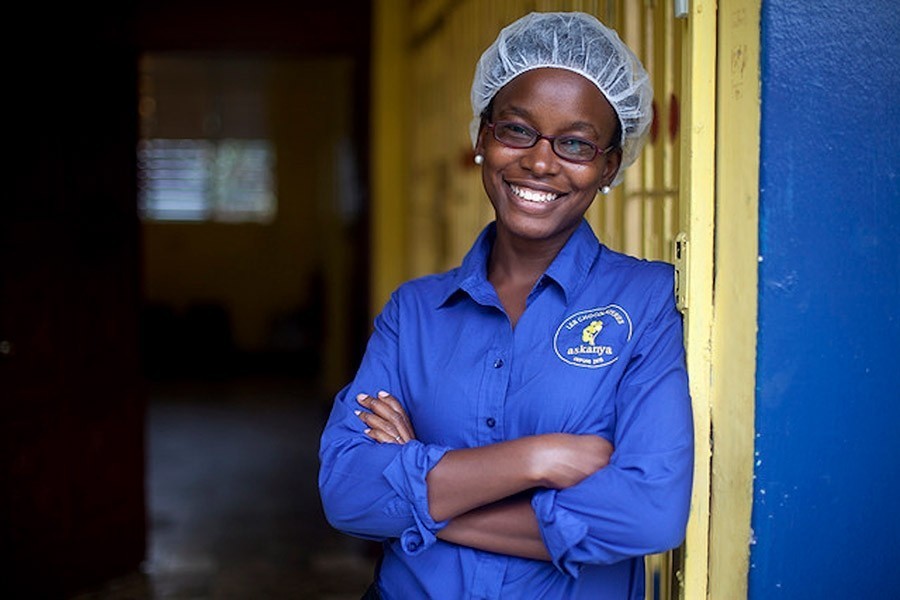 Haiti isn’t exactly the first country that comes to mind when you mention chocolate, despite the fact that Haitian cacao is rated among the top 50 in the world. But Corinne Joachim-Sanon has decided to change that by introducing the country’s first and only bean-to-bar chocolate company, Les Chocolateries Askanya.

In operation for just over two years, the award-winning company has already garnered accolades internationally, including winning the Mott Green Sustainability Award at the 2017 Northwest Chocolate Festival, which is the top show for chocolate in North America. It also received recognition at the Salon du Chocolat in Paris, the world’s largest event dedicated to chocolate and cocoa.

That is no small feat considering Joachim-Sanon, who earned an engineering degree from the University of Michigan, had no prior knowledge of the workings of the chocolate industry. An industrial engineer who left a six-figure consulting job in New York to return to her native Haiti, she was a complete newbie to the world of cacao, but zeroing in on chocolate was a well-researched decision and her engineering background helped her fulfill the business goals she set out to accomplish.

“I didn’t even know what a cacao pod looked like, I had never seen a cacao pod before,” says Joachim-Sanon, who is also a graduate from the prestigious Wharton School of Business. To bring her up to speed, she hired experts in the chocolate industry. “Whatever I could do, those were my strengths – the strategy and operations management. What wasn’t my cup of tea, I hired the best to do it.”

That included hiring Chloé Doutré-Roussel, ex-head of chocolate production at Ladurée and Maria Fernanda Di Giacobbe, winner of the Basque Culinary World Prize in 2016 for her work with Venezuelan chocolate. The two trained and taught the Askanya team about the chocolate making process while Charley Wheelock and Duncan Ellinwood from Woodblock Chocolate in Portland assisted with choosing the right flavors and sizes.

Introducing the World to Haitian Chocolate

Askanya chocolate bars are currently sold in four flavors – two in milk (47 percent cacao and 50 percent cacao with brown sugar) and two in dark (60 and 90 percent cacao). Made with all-natural ingredients, the chocolate bars are available in two sizes – regular 2-ounce versions and smaller bite sizes. Bestsellers vary by region. Other flavors, including lime, mango, orange, cashew nut and sea salt, are ready to go to market but considering the business costs associated, Joachim-Sanon is unveiling them one at a time.

There are many evolving steps in the bean-to-bar process of making chocolate.  Askanya sources its single-origin cacao from farmers who are members of the Federation des Cooperatives Cacaoyeres du Nord (FECANNO). These 3,000 farmers grow their cacao on farms located throughout northern Haiti. Once the bean is sourced and harvested, it is checked for the desired level of ripeness and then fermented and dried. This is followed with sorting and roasting the bean, then cracking and winnowing to make the chocolate. Finally, it is grounded and refined, tempered to the consistency required, and then packaged for sale in visually striking wrappings that showcase Haitian flora and fauna.

As with any business venture, highs and lows are expected. Joachim-Sanon witnessed her fair share of ups and downs with production in Haiti. Issues with infrastructure posed a challenge during the first year but the team learned a lot from the experience. “The second year going into third, it is more stable,” she says. “When we started, we had every issue possible and imaginable so we are more comfortable now being able to produce day in, day out.”

Taking it all in stride, Joachim-Sanon and her dedicated team at Les Chocolateries Askanya are looking forward to more growth in 2018.  Hoping to increase distribution with more store locations and introduce a new flavor to add to the current repertoire, they want more consumers globally to indulge in Haitian cocoa of the finest quality.

To learn more about Les Chocolateries Askanya or see their store locations, visit www.askanya.ht and connect with them on Facebook and Instagram.