From Law to Desserts, Lin Jerome Co-Creates a Food and Beverage Empire in Las Vegas 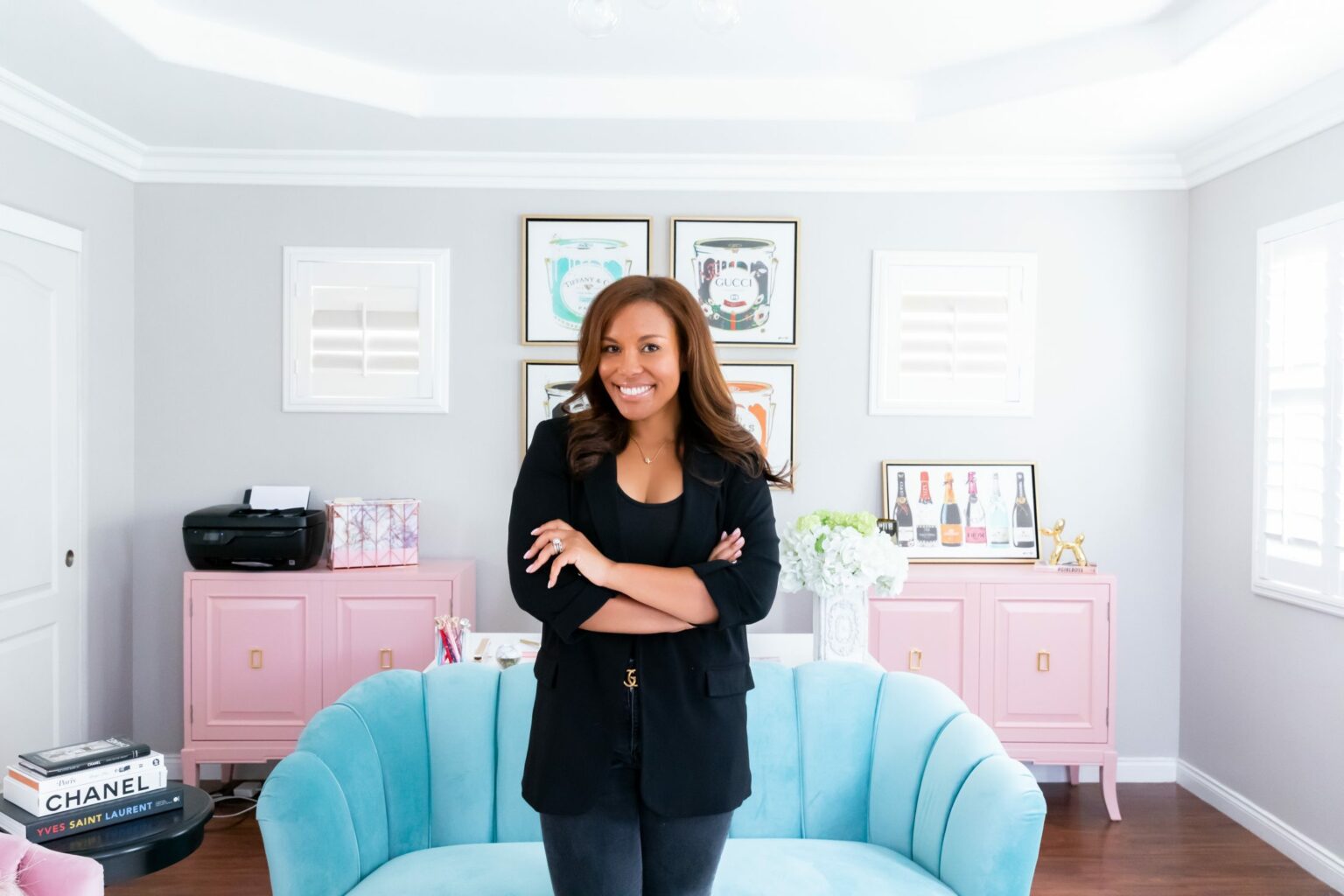 It’s hard not to be influenced by all of the lights and action while growing in up Las Vegas, Nevada, even if it is a little.  Known for amazing food and entertainment and unbeatable hospitality, “Sin City” is also home to a group of food and beverage concepts that singer turned lawyer and later entrepreneur Lin Jerome started with her business partner Alexandra Lourdes.

“Everything I have done has sort of put me on the path that I am on now,” says the New York native who moved to Las Vegas when she was ten.  Jerome co-owns Refined Hospitality that operates the state’s most Instagrammable restaurant according to the Food Network in 2019, Café Lola.  With two current locations and a third on hold, Jerome has her hands full balancing a growing restaurant empire, family and an unwavering pandemic.

The Call to Serve

Before there were pretty pink flower backdrops, artisanal pastries and cupcake lattes, Jerome was a student at the University of California San Diego with a singing career on the horizon.  A demo deal with Sony later fell through as she left college to live in Los Angeles full time. Although she stayed and continued to sing and get into acting, she says adulting in Los Angeles wasn’t as fun as it seemed.

Wanting to complete her degree, she moved back to Las Vegas and did so at the University of Nevada, Las Vegas (UNLV). Law school soon followed as she pursued her juris doctor degree first at Thomas Jefferson School of Law that took her back to San Diego, with a transfer bringing her home once again to Las Vegas and the William S. Boyd School of Law.

Full of life, she says a stint in criminal law revealed a path she didn’t want to go down.  Torn, she says her parents told her, “You need to do what you want to do.”

Jerome started Ladies Who Dine as a fun outlet to do more of the things she loved.  “We actually paired dining experiences with philanthropy. Growing up, I was a part of the National Charity League, a mother-daughter philanthropic organization, and I just loved being a part of the organization and what it taught all of us as women and girls at the time. So I wanted to put together a group that was somewhat like that in our older years,” says Jerome.

Considered a side project, Ladies Who Dine was a great segue into nonprofit work with organizations such as United Way.

As Ladies Who Dine continued to become bigger than expected, Jerome was now working at UNLV as the associate director of admissions for the law school.  She met Lourdes, who also worked at UNLV and ran a side project of her own, an online foodie influencer group.

Soon an opportunity came along to collaborate on a charity event for the Make-A-Wish Foundation.  Together they raised over $40,000 with more than 600 people in attendance.  “We were like, ‘Oh we kind of have something here,’ and essentially what we were doing is marketing,” says Jerome. “She was doing social media, and I was doing all of the event planning and getting the community engaged.”

Another event that would eventually start their partnership gathered almost 300 women for a restaurant’s happy hour. The owner was Jerome’s husband’s boss at the time, who would become the duo’s first client under their new company, The Refined Agency that offered interactive marketing services.

Their client roster grew through word of mouth, and at one time, the partners juggled up to 30 clients at a time.  In December of 2015, Jerome and Lourdes decided to go all in and quit their full-time jobs, not knowing that a line of cafés would come next.

More Than a Cup of Coffee

With a busy client schedule, Jerome and Lourdes were very familiar with all of the coffee shops in and out of town that became their unofficial office. Although it allowed them to keep overhead expenses low, the shops didn’t do much to inspire or excite them.  This prompted both to think, “One day, we’re going to start our own coffee shop where we can have The Refined Agency upstairs, and we can have a coffee shop downstairs where we can make revenue. Twice the revenue just in one space,” says Jerome.

Taking the thought further, Jerome says a visit with a client in Los Angeles at a particularly cute coffee shop reignited the conversation. Following that trip, the concept of Café Lola was born.

Named after Jerome’s mother and Lourdes’ dog who share the name Lola, the partners opened their first location in 2018 and a second the following year.  The country’s shutdown due to the coronavirus in 2020 stalled plans for their third Café Lola location in partnership with Macy’s. Jerome says, “We did have plans to really grow quickly with Macy’s, but now we still want to grow the brand and start franchising. We want to see them everywhere.”  Café Lola would be one of several concepts the former university employees would create under the new parent company, Refined Hospitality.

With COVID forcing businesses to cut budgets, Jerome says this led to the decline in clients needing marketing services. “We had decided that we really wanted to focus on our own brand. We had done this for others for so long, and we saw how impactful our marketing efforts had been for all these restaurants. That was another thing that got us to pull the trigger.” Becoming their own clients, they turned the focus to the growth of their brick and mortar locations.

Businesses That Serve Each Other

Expansion led to the next best thing: doughnuts and beignets. “We had always talked about having a dessert shop. We have a bunch of different concepts we want to do…and so when we came across this opportunity, we’re like this would be great because again everything we try to do is two-fold. We had been really wanting to make all of our pastries and desserts in-house for Café Lola, so when we came across this location, we said, ‘Oh my God, this is perfect.’”

The location was previously a doughnut shop, which provided the ideal setup for providing food preparation for Café Lola and their next concept, Saint Honoré Doughnuts & Beignets, which opened in 2019. Their house secret is behind the beignets made from scratch daily. Doughnut lovers are also in for a treat with options to include their sour cream, vegan and gluten-free doughnuts also made from scratch, and their signature creation they call DoughSaints, a tasty doughnut and croissant hybrid only available on Saturdays and Sundays.

“When COVID hit, we had to get super, super creative, so we actually created two other businesses out of both of these concepts. So with Café Lola, we created Lola XO, which is a line of custom dessert boxes that we sell, and they actually flew off the shelf because of COVID and everyone celebrating at home, and not able to celebrate with family and loved ones.”

The other business took on more of a savory twist with pizza offerings during the evenings inside Saint Honoré Doughnuts & Beignets. Jerome’s husband, a trained chef, is behind the pizza pies available from 5 pm – 9 pm as part of the business they call Pizza Anonymous.

“We were able to bring in additional revenue, give more hours to our staff and that concept started to take off as well. Now we got a couple of food and beverage concepts under our belt in the past three years,” says Jerome.

As anyone in the food and beverage industry knows, the road traveled to open and operate a brick and mortar concept, especially multiple ones, can be bumpy, full of twists and turns and long. The lessons learned are immediate.

From challenges come opportunities to make the necessary pivots needed to ensure each business venture's success.  For Jerome, launching multiple businesses within three years has come with some key learnings and affirmations.

“If you are passionate about what you do and you have a great idea, regardless of what anyone tells you, you have to go for it.  You have to do it. You have to believe in yourself.”

She also shares these bits of wisdom:

And lastly, she says each change and pivot made has been driven by the following encouragement that we all need to remember, which is, “Never give up and think outside of the box.”