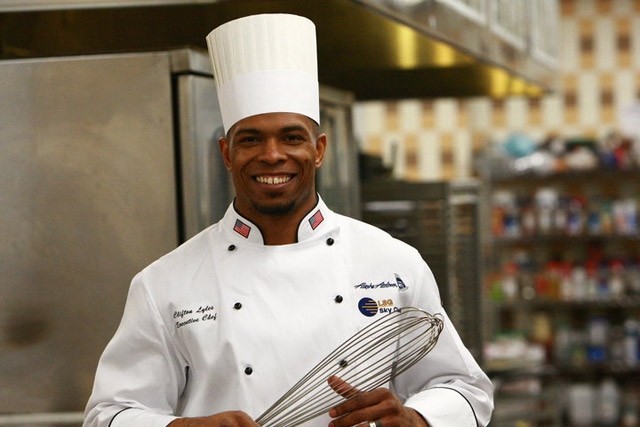 One of the benefits of upgrading to First Class when you fly is avoiding the Hungry-Man type entrees that come with being in coach. LSG Sky Chefs is an in-flight services provider that strives to offer airline companies outstanding onboard service to its passengers. Chef Clifton Lyles, otherwise known as Chef Cliff, serves as LSG Sky Chefs’ executive chef for their client Alaska Airlines.  Lyle’s mission is to counter the negative stereotype of airplane food by providing high-quality dishes for those who crave luxury even at 30,000 feet.

Even though he is an Indianapolis native, Lyles is very familiar with what we call the Bay Area after receiving his culinary degree from the California Culinary Academy in San Francisco. Being one of six children, he learned early how to cook for himself and others. In raising his own family of four girls, his estrogen-filled surroundings gave him a particular way of looking at food. “The many women in my life have taught me how to listen and observe. Those lessons have also directly applied to my perspective on food. I am emotionally connected to food. I listen and observe [when preparing food] as opposed to bending it to my will,” he explains.

Such an enriched personal experience has given Lyles the edge over the culinary competition. Conversely, on the testosterone side, he comes from a long line of military men.  After culinary school, Lyles joined the Marines Reserve and once he served his country proudly, he was ready to serve up some great food. Working for various fine dining venues and corporate functions, he craved the ability to be autonomous and have creative freedom with his dishes. For three years, Lyles maintained his own catering business in Los Gatos, Calif. “I loved the area and we had lots of corporate clients in the Silicon Valley area,” Lyles relays.  Here in the Bay Area, we all know that our lifestyle comes with a hefty price tag. Due to the cost of living, Lyles sold his catering business and moved to the Pacific Northwest. His love of the outdoors brought him to the Seattle area. 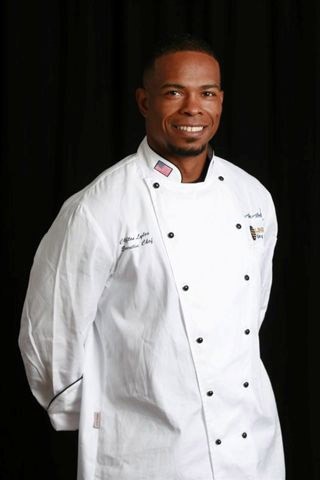 After arriving in Seattle, an opportunity became available to be a culinary professional for the airlines and soon he landed the position with LSG Sky Chefs. “Seven years ago, I was ready to move on to the research and development side of the culinary arts,” Lyles explained. Regulations and restrictions for creating dishes for a FAA- regulated environment can be a challenge to overcome. Surprisingly, Alaska Airlines has given him complete creative control over the menu. “I put together a menu, which goes to a panel for review and approval,” Lyles says. More often than not, his wishes are granted. He researches what is trendy and applies passenger survey results to his next seasonal menu.

Each season, Lyles uses ingredients that are locally produced. There are no preservatives and he is conscious of the temperature and time each dish will need for the flight attendants to manage. “I strive to provide the best quality product for the lowest cost by buying what is local and available seasonally,” Lyles explains.  He has had Alaskan snow crab on the menu as well as king salmon.

I vote to have a menu at the counters at check-in, so when the attendant asks you if you want to upgrade to First Class, passengers can ask, “What’s on the menu?” I certainly know it would be an imperative factor in my decision to upgrade.

This article was written by Jeanine Lewis.