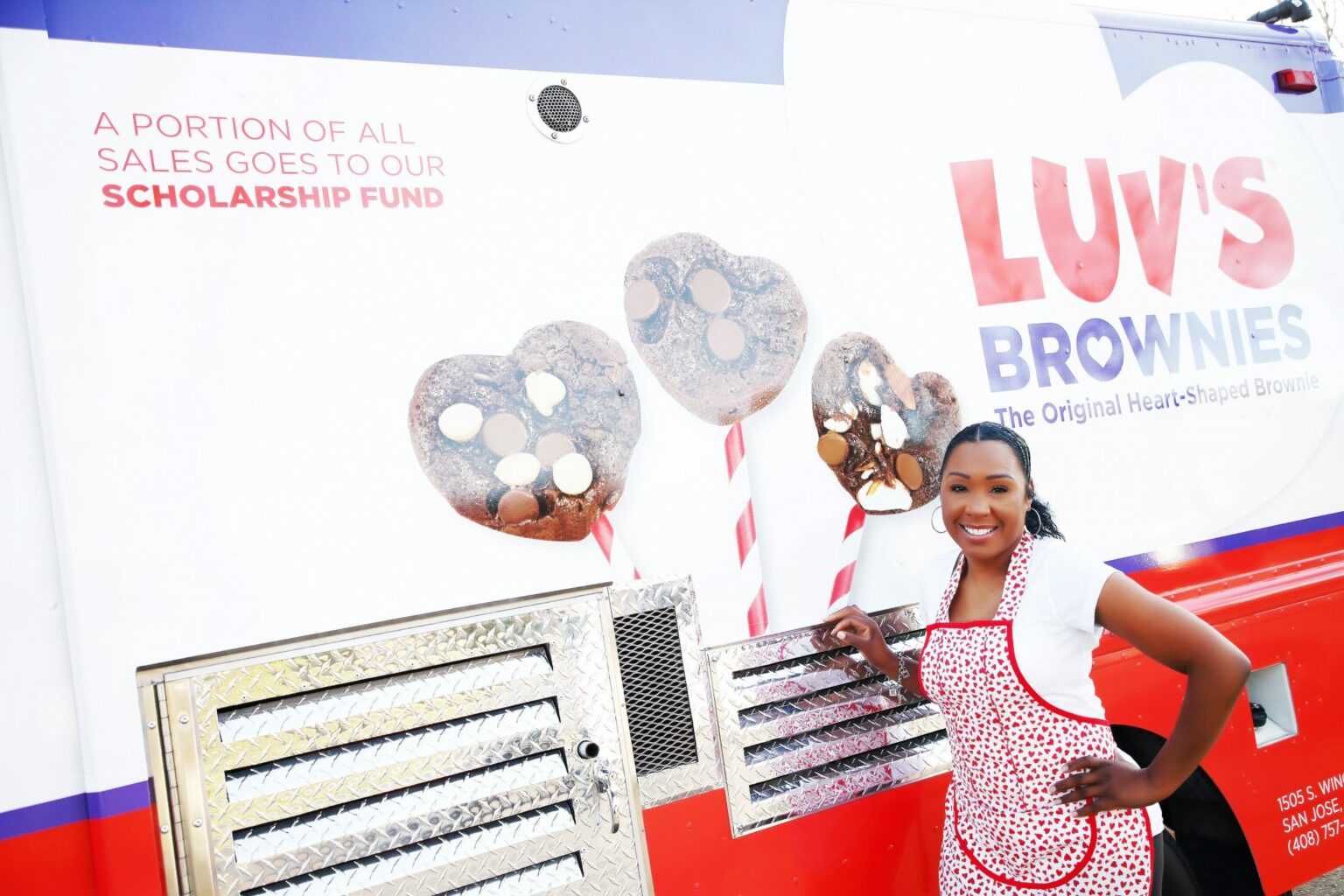 The month of February is of course the perfect time to celebrate love and what better way than with heart-shaped brownies from Luv’s Brownies, owned by Andrea Lacy.  The San Jose, California entrepreneur started the business 25 years ago after a gesture of gratitude and a recipe mishap.

The award-winning brownies that double the chocolate for twice the deliciousness have been the cornerstone of Lacy’s incredible entrepreneurial journey that began in 1996. The brand’s success includes being the first online bakery at a time when e-commerce wasn’t even a known word; a far contrast today. In addition, national magazines and two published books offered a glimpse into her dessert enterprise.

But as any entrepreneur endures the ebb and flow of business, Lacy says, “There were a few years there that were really tough because people were just over brownies, like hearts or whatever. And then I just kept thinking, ‘Maybe I am just done. Like what else can I do?’”

She answered that question last year when she put Luv’s Brownies on wheels, announcing her the business’ new chapter: a dessert truck.

After making the business official, Lacy worked hard to be the online brownie queen.  Her do-it-yourself search engine optimization skills dominated search engines, bringing customers directly to her. With placing orders online for products and services in its infancy, Lacy says people were surprised when she would show up at their door.

Customers agreed that the brownies were good and therefore business was good. But then the game changed.  More on and offline competition, changes in customers’ dessert preferences, and others getting in tune with the value of SEO started to impact Luv Brownies' sales over the years.

“I was actually in the process of giving up my business and thinking it’s just time,” says Lacy.  “And then I looked back at my journal of notes and realized I had the idea of a dessert truck a long time ago.”

Not willing to throw in the towel just yet, she diligently researched how much a truck would cost and everything involved in the process.  The search eventually led her to someone in Hayward who connected her to the owner of a trailer that was barely used.

Having saved enough to purchase and working hard to get the rest of the money needed to transform the truck, Lacy was now in the process of making the journal note come to fruition.

“I think of it as my road to a dessert truck 25 years in the making,” the mother of one says reflecting.

A Story Through Desserts

On the road since December of last year, you can currently find the dessert truck on the weekends at farmers markets in San Jose and Cupertino, California. Lacy also does an afternoon pop-up appearance on Sundays at Benjamin Cory Elementary in San Jose.

There is one thing to have a dessert truck and then another to have a Luv’s Brownies dessert truck.  Immediately, Lacy knew that her heart-shaped brownies wouldn’t be enough to carry the truck.  So she started thinking again.

“I wanted more than just a brownie truck.  And my friends had mentioned they love my coffee and my caramel, and I have a love of hot cocoa, which is my favorite drink,” says Lacy. However, she didn’t stop there.

“Then I started thinking a little more about my Cuban heritage and I love Celia Cruz. She is like my all-time favorite, and I reached out to her people to find out if I could use a song in-app and on the truck, and they were like, ‘Yes, use the song, please use the song.’ I think one of her dying wishes is that she didn’t want her music to die. That is when the whole story kind of came together for me to think through kind of more of a Cuban flair than just a brownie truck with milk.”

The brownies are still the show's stars and available on a stick or simply as a grab and eat. You can go all in with the in-house brownie ice cream sandwiches.  After receiving rave reviews for years, Lacy’s Cuban coffee is also on the menu served iced, as an expresso shot or whipped.  Look for the housemade marshmallows if hot chocolate is more of your drink of choice.

And what would a dessert menu be without ice cream?  Their premium vanilla is served in a housemade waffle or regular cone, with a caramel drizzle, also made by Lacy.

The goal was to have a completely new menu that is not available online and provides a little extra incentive for customers living in the Bay Area and South Bay to stop by. While there, dancing is optional but encouraged as Celia Cruz’s “La Vide Es Un Carnaval” provides the truck’s background music.

Tenacity as a Key Ingredient

2020 wasn’t just a pivotal year in her business but also marked an important step in the legacy Lacy wants to leave behind to her teenaged son and community.

“At 25 years, I just kept thinking I want something for myself, and I want something I can hand down to my son.  I was adopted and I adopted my son and I never want him to forget where he came from.”

The California native herself knows a lot about being tenacious when working toward a goal after failing the same college math class five times.  It was after she was diagnosed with having dyslexia that she was able to pass, earn her degree and continue pursuing her education.

“There were people who believed in me, that helped me, and I would not have been able to get a scholarship for an MBA if it weren’t for those people.”

For Lacy, understanding how dyslexia impacted her life led to discovering how it

also unknowingly contributed to her award-winning brownie recipe. The thickness of the batter while baking brownies as a thank-you gift seemed a little odd at first. Completing the batch, the brownies were a hit and soon Luv’s Brownies was born. She later revisited the recipe and realized she had transposed some of the ingredients' measurements, which increased the amount added, especially the chocolate.

It is Lacy’s grit that continues to be celebrated 25 years after that fateful day in 1996. Turning obstacles into opportunities, she wants to encourage students to keep dreaming, keep believing.

“I want those high school seniors to know that I believe in you. I see you.”

Visit https://www.luvsbrownies.com/ to place an order with shipping available nationwide.  Here you can also learn more about where the dessert truck will be by downloading the app as well as how to inquire about having the truck come to a neighborhood or workplace near you.

Students are encouraged to apply for the Grit Award by visit https://www.luvsbrownies.com/scholarship to learn more about the criteria.  The scholarship can be used for vocational training, an associate’s or full 4-year degree program.