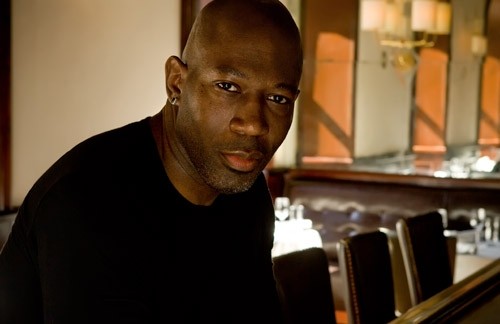 If you were able to catch the final episode of the Food Network’s “Chopped Champions” on September 28, there is a slight chance that you were in tears like the rest of us. The competition was intense and the stakes were high: the title “Chopped” Grand Champion and $50,000. Competitors chef Madison Cowan and chef Jason Zukas were both deeply invested professionally and emotionally in one of the most life-changing events of their careers. In the end, Cowan was announced the winner shortly after presenting his final dish, a dark chocolate and tahini cake with a dragon fruit and champagne compote.

A South London native, Cowan’s victory and rise to the top have created fans all over the world and now he is able to truly see the fruits of his labor. Rewind Cowan’s life from that day and the journey that precedes is one of determination, soul-searching and faith.

From Homeless to Champion

Born to a Jamaican father and African-American mother, Cowan began cooking professionally at age 14. He credits his mother with planting the culinary seeds as she taught him how to cook so that he wouldn’t be dependent on anyone to do it for him.

Attending culinary school for a brief period, Cowan’s skills and techniques developed from hands-on experience and working with people from all over the world. As an international chef, his journey over the years has taken him to Detroit, New York, Jamaica, France, The Netherlands and Japan in addition to London. One chef he also credits for his growth professionally and personally is the late, great Patrick Clark. Cowan was actually homeless at the time and was seeking shelter from the winter weather and work at New York’s Tavern on the Green. Clark not only extended his hand to help, but became a great influence in his life and career.

RELATED: For Globetrotting Chef, Edward Blyden, Food is the Tie That Binds

Cowan would continue to live between the U.S., Europe and Asia, building his career every step of the way. No matter what hand he was dealt during his journey, he always knew that one day he would have everything that he dreamed about. “Sooner or later, good things have to find you no matter what your circumstances are.” Eventually, that is exactly what started to happen. Major accomplishments include cooking for Congressman Charlie Rangel, Halle Berry, President Bill Clinton and author and political advocate Mark Green to name a few. In addition, his contributions to opening a soul food restaurant in the West End of London garnered a 4-star review.

He eventually decided to work for himself and started his business Avenue, Inc., a Gotham- based, boutique culinary production company over nine years ago. Through his company, he created what he calls “Speak Easy” global culinary events for about 25–50 people in remote parts of the world. Shortly after that, he relocated to Japan following the birth of his daughter and spent two years there expanding his reach to include stints on TV.  As his company grew, he decided to relocate permanently to the United States in 2009 and since doing so notes that a flood of opportunities have come his way; one of which was “Chopped.”

Fast forward to today and Cowan is a father, husband and “Chopped” Grand Champion who is set to release his first book this December around Christmas. The book is a collection of recipes created and shared along his journey. He affectionately calls his cuisine soul food: food that feeds the soul and embodies the essence of who he is.

As for additional projects in the future, he says, “Whatever I do, it has to be something right, it has to speak to people, it has to touch people, it has to inspire people along the same lines as ‘Chopped’ did.” And whatever it is, we will all be anxiously waiting to witness the next part of his journey.

Chef Joe Randall: Back in Class with the Dean of Southern Cuisine
Michael Caines: The Journey of a U.K. Top Chef