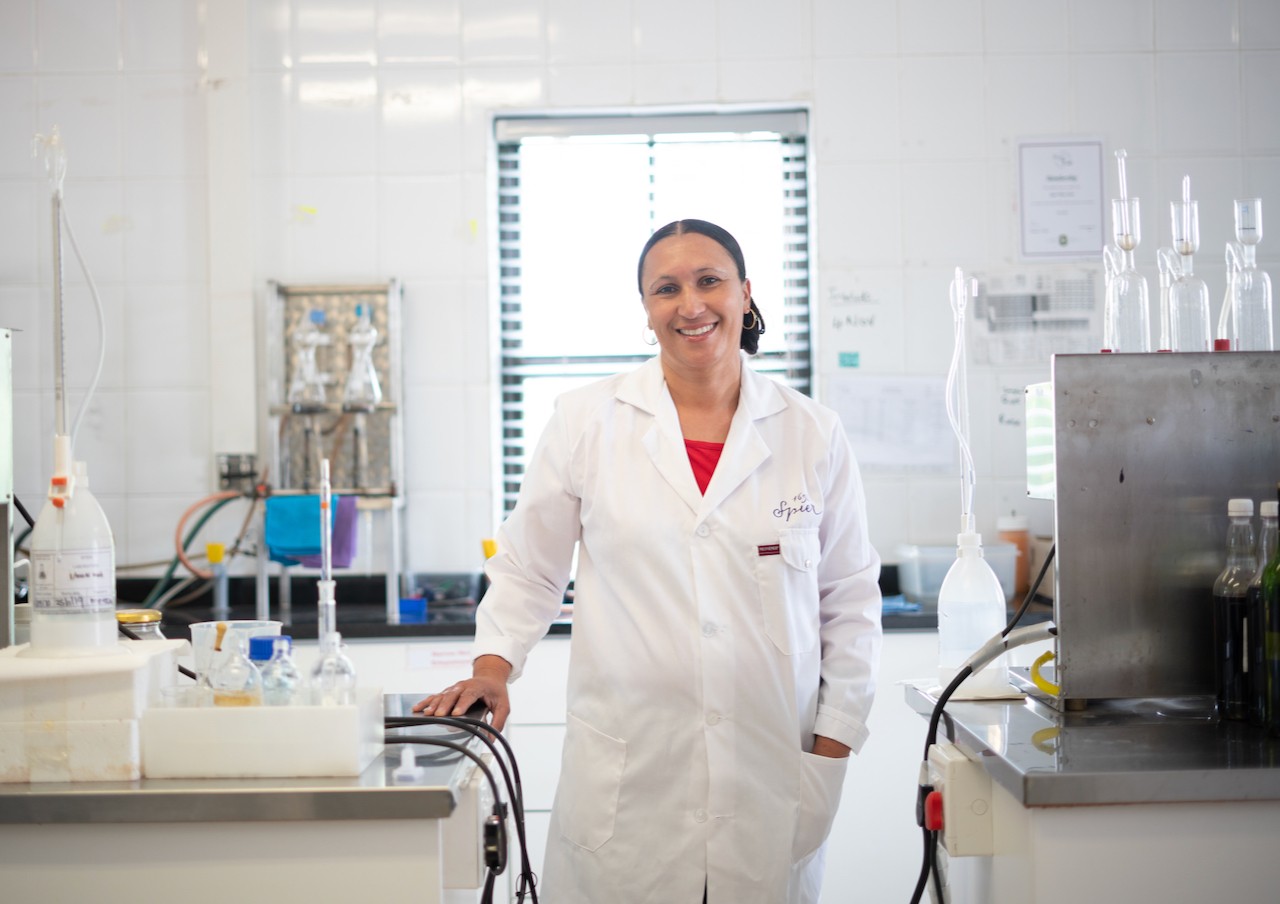 When Merecia Smith was in high school, her dream was to be a social worker. She wanted to help people. She saw the difficulties faced by many in the impoverished community she was born into on the outskirts of Stellenbosch — South Africa’s second-oldest town, dating back to 1679 — and the hub of the country’s most celebrated wine route.

When she realized that to pursue this dream she would need a university degree, costing money her parents didn’t have, she enrolled for a one-year dental assistant diploma at the equivalent of a city college. She passed with flying colors. But then could not find a job.

A friend told her a Stellenbosch wine farm was looking for a general worker. It was the same kind of work her mother was doing. What Smith had hoped not to do. “It is the lowest ranking job on the farm,” she says.

“You clean, you pack containers, you help bottle. You’re called on to do anything that needs to be done,” she tells me as we chat by phone, our conversation interrupted every so often by the homey sound of her Jack Russell terrier barking in greeting at someone who has just arrived.

Back then Smith had no idea that fast-forward 22 years, she would be working her dream job and living her passion.

In July last year, Smith launched Wine Analytical Services, South Africa’s first Black-owned wine analysis laboratory. It is on the property of the Spier wine farm, one of South Africa’s oldest with a recorded history dating back close on 330 years. It is a collaboration with Spier. She’s been working with them for the past 12 years. They are her priority client.

Wine analysis. An expert wine analyst. It is a profession, a field she didn’t know existed 22 years ago. In fact, only in the past ten years have she and her husband, Herman, an investment bank IT specialist, had the resources to start buying wine. They are living what for many is the dream: spending weekends in their backyard driving around the Stellenbosch wine route and enjoying tastings at world-famous wine estates that in good times, lure tourists from around the world.

Back to how it all began. Smith had been in her first “general worker” job for a couple of years when she heard the estate she was working at needed a lab assistant.

RELATED: Shoe Crazy Wine is Made from Love and Sole

So she did. And started to learn the basics of analyzing wine. A technical skill involving chemistry, numbers, figures and names, which other than the word “alcohol” is pretty incomprehensible to someone like me. If you, the reader, want to get an idea, check out this South African Wine Laboratory Association (SAWLA) page, where you will see some of the elements measured. Get an idea of the behind-the-scenes activity. Things other people — such as Smith and the winemakers — concern themselves with so you and I can sit back in leisurely fashion, swirl, taste and savor a delicious vintage of our choice.

At some point, the lab plant moved from Stellenbosch to nearby Paarl, South Africa’s third-oldest town (founded in 1687), which markets itself as “the pearl” of the Cape winelands. Smith spent a few years there gaining more knowledge and experience, working as a supervisor. Then the plant closed. And she and all her fellow workers were let go.

When one door closes another opens, the saying goes. And sure enough, it was 12 years ago and Spier, in Stellenbosch, was looking for someone with lab experience.

Smith worked in the Spier lab as a supervisor until 2017, when she was promoted to lab manager. Last year in July after discussions and in a supportive collaboration with Spier, she launched her start-up Wine Analytical Services.

“By empowering entrepreneurs, we are catalyzing growth and positive change that will ripple far beyond our own business,” says Spier CEO Andrew Milne.

“I am on the Spier premises. They gave me a five-year contract. I know they will give it to me again after that,” Smith says, sounding confident and happy.

“They are my main customer and get priority. But I now can market my business and to date, I have five other winery clients.”

She is also happy to say it is something of a family affair.

“My husband is so supportive,” she says affectionately.  Realizing that if she bought an imported analysis machine for part of the process, she would be able to do something in that was taking her two hours in five minutes.  He agreed they would use their home as security against the loan.

Her 22-year-old son, who studied tourism and couldn’t find a job, is working in the lab and loving it. Plus she has employed a second assistant.

Smith has achieved excellence in her field through hands-on training and experience with “a few courses here and there.” The SAWLA runs workshops three times a year, which she attends. It was at one of these that she learned about the cutting-edge equipment she invested in. SAWLA also sends two “unknown” wine samples to all labs each month for ongoing proficiency testing. “We do good,” she says, proud of their consistent A-grade ratings.

What she does, Smith says in answer to my question about her analytical expertise, is “like food technology, but I do it with wine.” She works with Spier’s seven winemakers and on all the different red, white, rosè and fortified wines. “And now we’re busy with a non-alcoholic wine.”

She works with wine from the barrel and wine from bottles. Lots of measurements involved.

When tasting and drinking for pleasure, her favorite wine varietals are pinotage, the uniquely South African grape, and merlot.

Smith has not traveled much except around the wineland region she calls home, which is also home to many of South Africa’s top wine estates and restaurants.

“I’d call myself a basic person,” she says. “I go to work, come home, sort out the house. I cook. I bake. I like to spend time with my husband. My two children.” Their daughter is 12.

This kind of contentment, I guess, can come with finding your dream and living your passion. Especially when you find it while living with mountains and vineyards as your backdrop in a beautiful wine country setting. Time to raise a glass and say, “Cheers!”