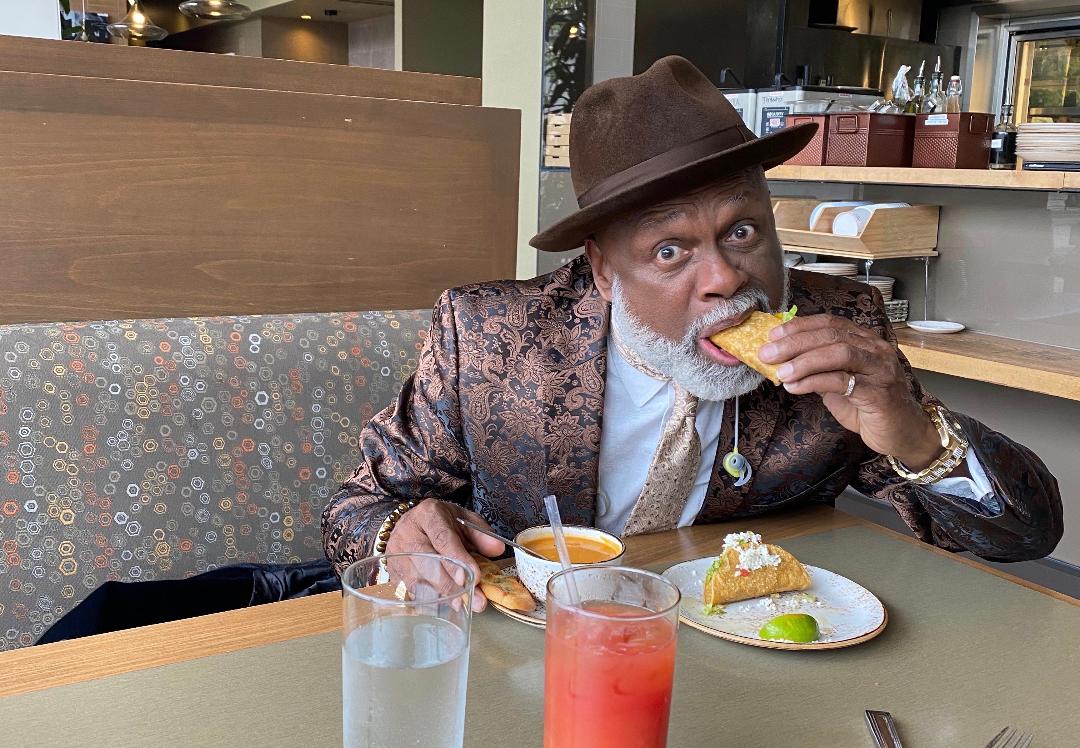 We all know and all love him, comedian Michael Colyar.  Withstanding the test of time (and Hollywood) for 33 years, he has been in some of the most popular and iconic black movies such as “Hollywood Shuffle,” “Poetic Justice,” “Family Reunion,” “Norbit” and Disney’s “The Princess and the Frog” as Buford the chef.  But Colyar’s love of food didn’t start with this beloved cartoon character. It began long ago in the heart and soul of the Midwest. Chicago, Illinois to be exact. This is the story of how Colyar has evolved from funny man to foodie, all while keeping it real.

After returning home from the military, Colyar was living in his mother’s basement while studying at the Free Street Theater, a professional acting company. Watching Eddie Murphy sky-rocket to stardom with hit movies like “48 Hours,” “Trading Places” and “Beverly Hills Cop” inspired him and when Murphy’s concert film “Raw” was released, it changed the game.

“He could wear the hell out of a red leather suit,” says Colyar. So he thought, “I’ve been funny my whole life, so I need to get out of the mustard and catch up.” Colyar bought some Redd Foxx albums and started landing jokes right there in his mother’s basement. Some guys Colyar knew encouraged him to start doing street performances. That lasted for a minute and he made some decent money at it, but then old man winter rolled in and shut all of that down. So in December of 1985, Colyar packed all he could into his 1967 Buick LaSabre and hit the highway. Destination? California. He had no idea of what was to come.

Armed with a dream, Colyar landed a gig that would change the course of his future. He did five one-hour comedy shows every Saturday and Sunday on Venice Beach for nine years straight without missing a single show. This exposure led to people in Hollywood seeing and inviting him to audition for television and movies. One of the first people to do so was Robert Townsend who gave Colyar his first movie role in “Hollywood Shuffle.” Then Bernie Mac had his people contact him about a TV show and he was signed to do the first season of “Def Comedy Jam.” “All of this was happening while I was on Venice Beach doing comedy. So everything helped serve everything else,” says Colyar.

Many years have passed since his days of doing stand-up comedy and Colyar has experienced longevity and success in Hollywood, something that’s not easy to come by. Now he’s known as a conscious comedian and he wears it with flair. “With all that’s going on, we need God and laughter just to keep from punching someone in the face. My job is to be an ambassador of joy,” Colyar says.

So you’re probably wondering, how does an actor and comedian from Chicago become a Hollywood foodie? That answer is simple. It all began when Colyar was 12 years old and working for a brilliant caterer in Chicago named Michael Seay, who was originally from Louisville, Kentucky. “That was the first honest money I ever made at $5 an hour,” admits Colyar. “We catered to Chicago’s top executives and elite society. I was also a waiter at some of the top private clubs,” Colyar shares.  Indulging in filet mignon, coq au vin and Steak Diane regularly did the trick. “That’s how I started to love food.”

Now his culinary curiosity is focused on Asian-themed dishes served at top restaurants such as Tao in Los Angeles and Chinois in Santa Monica. I wanted to know more about Colyar’s love of food, so I continued my interview with a series of food-related questions.

Do you have a favorite meal or dish?

Do you take pictures of your food and post them on social media?

Yeah, I have posted my food, but mostly I post other people’s food. I don’t cook that much stuff. I only cook my greens. Sometimes I’ll put on the video and let people watch me go through the process.

No, I wish. I don’t know how to cook everything. My main thing is greens and hot water cornbread. I believe I could cook anything if I had a cookbook in front of me. I like to experiment too. I cooked a turkey last year. It was tasty, but it was a little tough. You’d have to use your good teeth and chew it for a long time. You should lay down when you eat it because you’ll be working with that for a minute. Yeah, I’m not allowed to do that anymore. I’m a beast with salads though.

What food reminds you of your childhood?

That would have to be dessert. I love Tastee-Freez (a soft-serve ice cream). That reminds me of my childhood, along with pancakes. Oh, and cornmeal mush. You eat cornmeal mush when you can’t afford cereal or oatmeal. You just take cornmeal and boil it in a little water. Then you add sugar and milk and yum, yum, yum. It’s delicious!

Sugar. Grits are supposed to have sugar. Black folks gotta get away from that salt. That’s why we’re getting heart attacks and hypertension. Eating ham hocks and pig’s feet, hog maws and pigtails and ears. My daddy used to eat all that. I would get scared when he brought all that stuff in the house. He would come in with hairy a*# pigs’ feet wrapped up in a newspaper. He’d sit them on the table and open them up like it was a beautiful gift. I’d just run away from home. I said, “I ain’t coming back. I am gone!”

And what’s your take on the healthy food craze?

I think it’s the correct direction we should be going and I can only pray that sooner or later we’ll all have the discipline to actually do it. My woman is vegan and I’m not. I think we got to eat these animals. I love chicken and when I eat chicken, I feel like I’m doing the Lord’s work. You can’t do nothing with a chicken but eat the chicken. When I eat a chicken, the Lord smiles. Really it should just be chicken breast. Basically, chickens don’t have breasts. It’s more like chicken chest. You ain’t never seen a chicken breastfeed another chicken, have you? No, so you should eat the chicken chest because it’s delicious. The chicken chest is white meat.

If life ends tomorrow, what would be your last meal and your last act of kindness?

My last meal would probably be a chicken salad—a creamy Waldorf chicken salad with some healthy crackers. My last act of kindness would be to try and find anybody who needs help and help them. That’s what I try to do today.

And finally, what would you want to be known for?

That I brought humor to everybody and made our lives a little bit easier.

And in parting words, he says about the current COVID-19 pandemic, “Everybody needs to enjoy your life. Don’t walk through your life frightened. It’s gonna be okay as soon as the swelling go down. So embrace life, love it, and keep God first because everything is about family and God. Everything else takes care of itself.”

So there you have it. Michael Colyar the actor, the comedian and the foodie. Umm, sounds like a great title for a cookbook. Check him out on Facebook, Instagram and Twitter and on his website, www.TheRealMichaelColyar.com, where you’ll find his books (he’s the published author of three books) and information about his one-man play entitled “Michael Colyar’s Mama.”

Glynis’ Kitchen: Serving Love and Healing on a Plate
Tia Mowry and McCormick Spice Up the Year With New Partnership