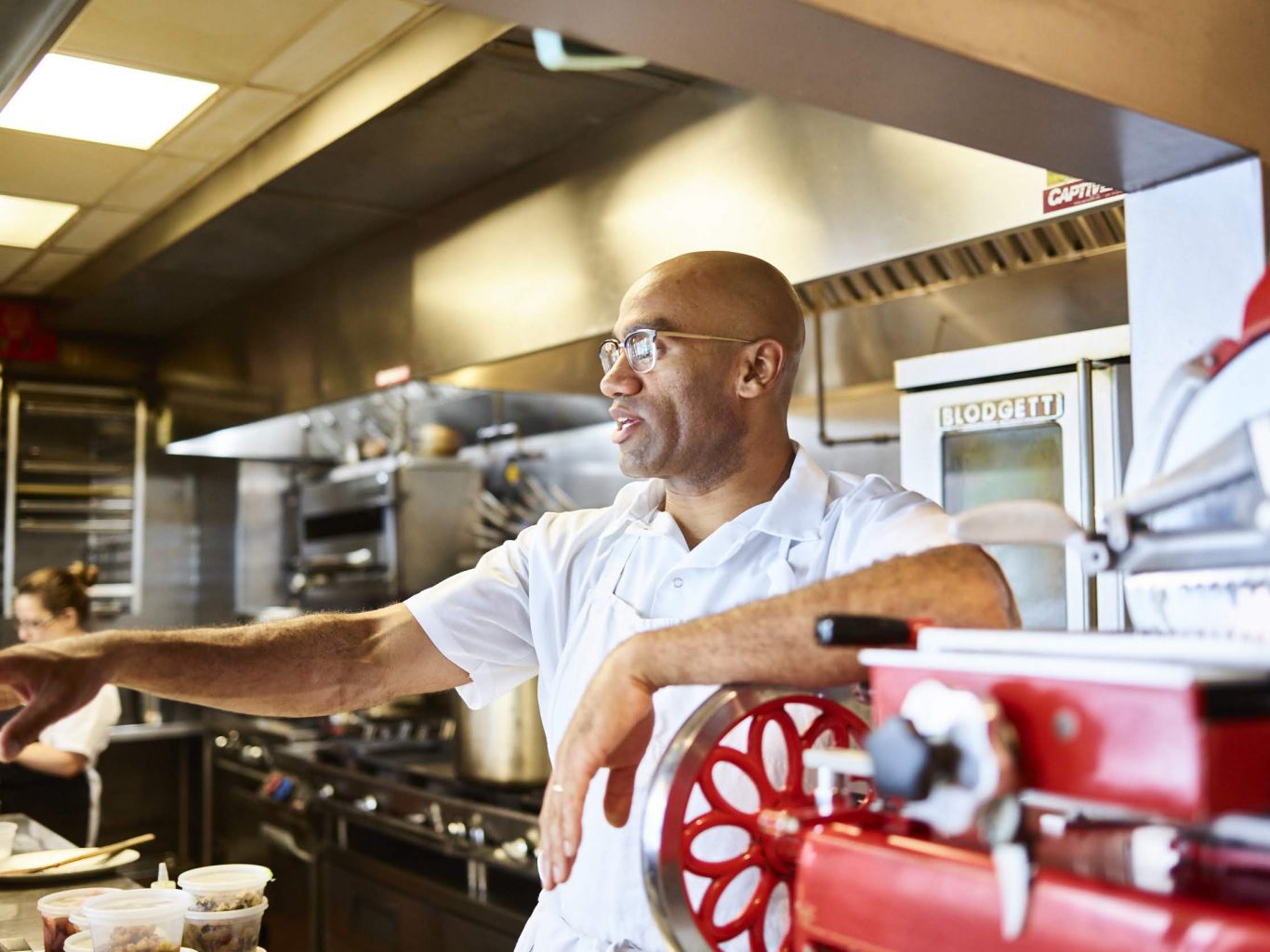 As the only Black chef-owned restaurant in Boston, Douglass Williams of MIDA Boston shares his culinary journey and his love of culture, food and people.

Often times we gloss over our accomplishments because we get so focused on reaching our end goal. We forget to savor the full experience. The ups and downs of our journey, whatever that may be, somehow are bookmarked into conversations with friends or archived on some social media platform. When Cuisine Noir met up with chef and owner, Douglass Williams of MIDA in Boston, Massachusetts, we learned the importance of valuing the entrepreneurial journey. We also learn to celebrate wins as they come and asserting one's talents to help others dream big while building a legacy rooted in the love of culture, food and people.

The East Coast native gives us a peek into his background as an only child. “I was born and raised in Atlantic City, New Jersey. Funny enough, my mom worked for Trump’s Taj Mahal for 26 years. Mother was Syrian-Lebanese; she had me when she was 40.” Williams’ father is African-American and was 23 at the time of Williams’ birth. “He was the chef and she was a cocktail waitress,” shares Williams. Growing up in a home where both parents were connected to the food industry almost seems serendipitous now that Williams is an accomplished restaurateur. Williams credits his mom for developing his love of food. But things weren’t perfect. Williams shares, “I was born in ‘84, so ‘82 is when the Syrian conflict started [and] there was no way to safely bring a child or infant to that area. That was her way to keep me involved in the culture was through food and dad…knew how to cook because he was a chef. There was some duality to it.” Political strife prevented their travel to Syria, thus, food became a way to pass down her Syrian-Lebanese culture. By the time Williams was six, his father had left the family. “So he was 30 at the time. He moved to California to experience life. He just didn’t get a chance to do that yet,” reveals Williams.

Growing Up With His Syrian-Lebanese Mom

Williams smiles with pride as he speaks of his mother. “She tried to keep me close with the culture by the way she fed me because she didn’t speak the language.” But, Williams does not shy away from sharing the reality of life in Atlantic City. He admits, “You stay in Atlantic City, you basically do one of three things or a combination of all: 1. You hustle; 2. Go to the casino or 3. Have a child. And that’s the roulette wheel of Atlantic City is you do those things or you’re in the medical field.” As a young child, Williams wanted more in life. “I knew I wanted children and I knew I wanted to travel. I didn’t know how to travel. However, I wanted to be in a better position than [was] started for me.”

Things became more complicated for young Williams when his mom fell ill. “When I was 10, my mom got breast cancer, double mastectomy the whole nine. No boyfriend, [but] trying to find a man.” For Williams’ mom, having grown up in a very sheltered home, not allowed to date and being “kept in the house,” as Williams put it, made it difficult for her to meet new people. “You could understand her focus on being a mother was paramount, but also that's what she knew, and I think a lot of women and fathers fall into that category of just focusing on what they know.” Williams is candid about how fortunate he was to have a loving mother. “I’ll take that over the money and maybe even another father. I’d rather have one extremely loving parent than two kinds of emotionally unavailable parents.”

Williams’ mom immersed him in the food she grew up with such as baklava and kibbeh. “She started to express the culture that she knew through tabbouleh, [made with] parsley, bulgur wheat, cracked wheat, [and] mint,” states Williams. “She was able to express to me: A. How much she loved me, and B. How much she wanted to nourish me. And that gave me an inherent feeling of how to do that and why I should,” admits Williams.

Finding His Way Through Culinary School

At 16, Williams was diagnosed with Crohn’s disease. With a palate already developed for Middle Eastern cuisine, Williams was determined to improve his health through food. “I am going to cook my way out of this disease. And I started getting confidence through making little cheese bites for my friends and taking them over to the house.” Williams’ dishes were a hit among his circle of friends. He gained momentum from these experiences.

After graduating from high school in 2002, Williams knew he wanted to attend culinary school. He enrolled in Atlantic Cape Culinary School where he graduated in 2004.

Williams found ways to navigate culinary school despite his battle with Crohn’s disease. Williams says, “We would taste our food and I chewed until it was like liquid and then I’d spit it out. I’d get the texture, I’d get the seasoning, I’d get the spices and I’d repeat that [process].” Through healthy eating and the knowledge of what unprocessed foods can do to the body, Williams’ Crohn’s disease was finally under control. However, Williams’ mom was still sick.

It’s now the spring of 2006 and Williams was on the hunt for a position. “I was looking through a culinary newspaper and I see this guy, Michael Schlow. He went to the same culinary academy as I did in ‘86 with my dad. Boston’s not that far, New York is a little expensive and a little much right now [and] all the other food cities were basically too far.”

Williams wanted to remain close enough to New Jersey if he ever needed to visit his mom. “It seemed doable,” he thought.  “I called him [Schlow] for six months, didn't answer. Finally get a callback. And a month later in May of 2006, I moved to Somerville, Massachusetts and rode my bike every day to Radius. That was the beginning of my professional career.”

Williams was determined to soak up everything he could from his professional career. “I made a conscious decision to use this as my launchpad to go where I wanted. I didn’t have a lot of money, but that doesn’t mean I wasn’t rich with culture, but I knew that it didn’t take money.” On using his love of food, culture and travel, Williams took every opportunity to expand his worldview. In his extensive culinary career, Williams has traveled to Paris and Bangkok, among other major food cities. “Anywhere in the world you go, you can use food as currency. Or at least the skill to cook food, to prepare food, and to nourish people, as currency.”

Williams was committed to making the most out of his culinary experience. “I leveraged the confidence to say if I want to travel, I have the freedom to experience life.” His first international trip as a teenager in culinary school was to Vienna, Austria. “I had never been to college. I never lived on my own, sharing with other people in another country doing whatever you want to do. I’d never experienced that—that freedom to experience [a new culture and place],” says Williams reflecting on his time abroad.

Honing His Culinary Skills Around the World

The 15-year culinary veteran and “Top Chef” contestant shares his experience of working in some of the world’s top food cities which include Boston, Bangkok, New York and Paris. “I’d always wanted to go to New York. New York and Paris were pinnacle places I’d always wanted to go. I went to New York, [Paul Liebrandt’s] Corton, a 2-Star Michelin restaurant. I always wanted to do Michelin, just to see what it’s about but also to see how I stack up.” This helped solidify the culinary path he’d chosen. “New York is where you go. It was in TriBeCa. Stayed there for two years. I had a phenomenal time. I worked with some of the best chefs in the world. I realized quickly I was pretty good.” New York was Williams’ litmus test.

Williams made a connection while working at Corton; a new opportunity opened up at the 2-star Michelin restaurant Akrame in Paris. “I went to Paris. I was [living] between Oberkampf and La République [neighborhoods],” Williams says.  His hard work was finally paying off. “Again, I attribute it to some luck, but there are some things that line up for you if you really just want to do it. Again, it doesn't mean coming from money. You just have to put yourself in those positions and do it again and again.” Not being afraid to step outside his comfort zone and pursue new opportunities is what's led to Williams’ culinary adventures and success. Reflecting on his time in Europe, Williams shares, “Funny thing about Paris, it just melts you. It’s Paris.”

Williams opened MIDA in 2016. Mida is Italian for “he gives me,” which Williams translates into “generosity,” one of the guiding pillars of the restaurant. “So that mixed with sensibility allows me to have the range and to cook from the heart and to cook from this openness. But also apply my own Syrian-Lebanese, Middle Eastern, just hospitable because that is at the base of what generosity is.” The restaurant located in Boston's South End neighborhood is influenced by classic Italian traditions with dishes made to be shared between friends.

“Mida and my travels have helped humble me to see that the “boogie man” doesn’t exist when you travel. Right, you see things that may upset you [and] realize that everybody’s got those same problems, but it's how people deal with them, how people survive them, and how people endure them. That's what gives you inspiration to realize your problems are much smaller than you actually think they are—it's shared and when it's shared, your pie slice is much smaller—whether it be problems or profits. So that’s what travel and awakening myself to that does—for the food and how I serve hospitality.”

Many projects are on the horizon for Williams. “We are opening up a pizza shop in North Station, The Hub on Causeway. It's going to be called Apizza, you pronounce it “a-beets.” It's in New Haven, Connecticut and Williams along with his business partner, Seth Gerber, plan to bring this new venture to Boston. “In my opinion, [it’s] arguably the best pizza in the world,” says Williams. It’s a Neapolitan-style pizza with roots from Naples, Italy.

When asked what advice he'd give to anyone interested in leaping into the restaurant and hospitality industry, Williams shares, “Do it with grace, stay open, you gotta be smart, be yourself, but also be the new you. Grow into your new shell. It’s difficult, but you have to try. Don’t be afraid of feedback. Just listen.” Lastly, Williams shares his approach to his philosophy as a restauranteur. “Being ready to say yes and being ready to act on it, and to think critically and independently.” These two are principles fundamental.

To keep up with this popular Italian eatery, visit http://www.midaboston.com/. You can also follow Chef Williams and his restaurant MIDA Boston on Instagram.