Nadia Takyiwaa-Mensah: Wine, a Woman, a Vision For Ghana 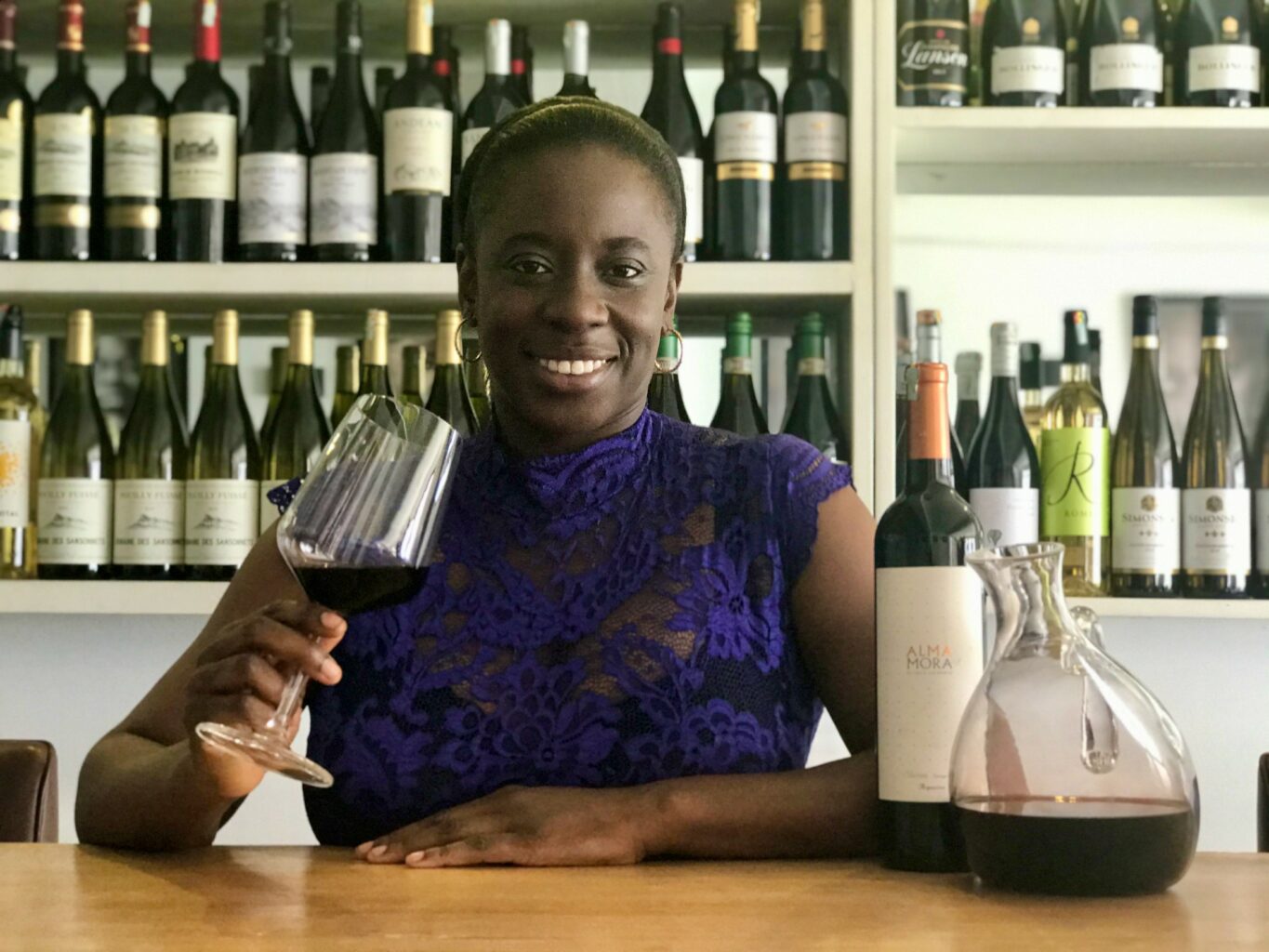 Divine intervention. This, attests British-born Ghanian entrepreneur, Nadia Takyiwaa-Mensah, has been the guiding principle behind her most noteworthy successes to date. Take her popular Sai Wine and Champagne Café. “A spiritual calling” is how she describes the origins and trajectory of the thriving Accra-based hospitality business.

“In 2012, I had a vision of this beautiful light-filled place with lots of glass and chandeliers,” she says. “I didn’t understand at the time what the vision represented, but God told me, ‘You will know.’

“Then in 2014, I was in Harlem, New York, sitting in a place that was beautiful, very like the vision, and I heard God say, ‘This is what you’re going to do next.’”

From New York, Ms. Nadia, as she is called by her inner circle, proceeded to Miami. While there, “God said, ‘You will call the place Sai.’” He also told her that, in time, she would come to understand the meaning of the name.

Soon as she was back in Accra, “I built my vision board.” Takyiwaa-Mensah had moved from the U.K. to Ghana in 2010, also in response to what she tells me was “a spiritual calling.”

She’d been to Ghana two or three times with her family, on holiday. But besides that, she had always lived and worked in the U.K. Now she found herself thinking, “I can’t be this person for the rest of my life.

That evening, “I had a conversation with God. He said, ‘You have a choice.’”

And so it was that she woke up to her options. “The spirit led me,” is how she puts it.

Within the year, she had moved with her then four-month-old son, Isaiah, to Ghana. Within nine months of settling into Accra, she had set up Sixth Sense Manifesto, which has turned into a super-successful international marketing agency.

Getting back to Sai Wine and Champagne Café. Working from her vision board, she asked her team to look for a suitable location to actualize her spiritual calling. There was, at the time, an expensive development going up. It was beyond her budget and outside the scope of her vision. She had been thinking “lovely,” not luxury.

Wines of the World

In her words, “An affordable place where Accra’s burgeoning middle class could come and taste and learn about the wines of the world.”

“Back then,” she says, We were getting the cheapest of the cheap South African wines in Ghana. Sweet and nasty. And people didn’t know about wine. They would gulp it down. Use the wrong glass. There was no knowledge of etiquette around wine.

“Even good restaurants in Accra, when they served wine, had a limited selection. A merlot and a cabernet sauvignon. Yes, and possibly Moët. But no cava or prosecco.”

Now, thanks in no small part to Sai, or so it would seem, international wines are becoming commonplace in Ghana’s major cities, she says. Stand-alone wine shops are opening in Accra. Wine is becoming part of the good-life social and dining scene.

Takyiwaa-Mensah’s personal wine appreciation story had involved a journey. It was a journey she says she was able to draw from when creating her business.  “I wasn’t always a wine lover, but climbing the corporate ladder in the U.K., there were a lot of fancy dinners.” Which of course, included wine.

Initially out of her depth, she looked and listened and then “started asking for merlot.” From there, she started asking about “the year and other things.”

“When I was launching this wine business, I decided to make it about Nadia: who she was, what she’d been through.” Her journey informed her, she says, giving her a perfect blueprint.

Glory Be to God

Back in 2015, when her staff found a great but unaffordable space in the exclusive development, she had been planning to purchase a five-bedroom house. “The deal fell through from the developer’s side, and I found myself with capital to invest.” Six months after hesitating, she opened Sai in that exact exclusive spot.

Before they were scheduled to open, someone told her about (the late) Indian spiritual guru, Sai Baba. “The name means “Glory to be God.”  I’d had no knowledge of any of this.” Now, as her significant Miami encounter had predicted, the name Sai made sense. And then, she realized, “sai” was also embedded in Isaiah, her son’s name.

When Takyiwaa-Mensah’s lease expired last year, she closed the door at her original premises and spent three months, during COVID, moving Sai Wine and Champagne Café to her new Accra location. One that, she says, is aligned with her initial vision and that reflects her journey and what she’s learned—also, the increased sophistication of the customers who frequent her establishment.

From the start, “We wanted to introduce people to good wine at affordable prices. And we wanted people to be able to try different wines without having to go and buy a bottle and then perhaps not like it.”

She wanted to educate wine drinkers about many of the things she had learned on her personal journey. Like understanding their palates better. Like sulfates and tannins in wine and New World versus Old World wines. The difference between a merlot from Spain when compared to a merlot from South Africa or Australia. Why some wines need to breathe. And blended wines. “A lot of people didn’t realize that five or six different grape varietals could be blended in a bottle. Or what a vintage is.”

Also, and a biggie because it breaks protocol rules, “that you cannot serve red wine at room temperature in Ghana. “Much of the time, the weather is far too hot here,” she says.

On their shelves at Sai’s, or chilled and ready to drink, is an impressive collection from France, Chile, South Africa, Australia, Italy, Argentina, Morocco, Spain — wines from around the world available for sampling and enjoyment.

How to Choose Wine

From early days, Takyiwaa-Mensah brought on board, as a resident sommelier, internationally trained Janet Adusei, who runs regular tastings. “She did a shiraz tasting here yesterday,” Takyiwaa-Mensah tells me when we hang out together via Zoom; she at Sai and me at my laptop in Durban with my Indian Ocean view.

During the five years and counting they’ve been open, their ever-growing clientele has requested a cigar and whisky bar, “hence the birthing, recently, of our cigar bar.” And people wanted an outdoor barbeque pit for balmy evenings. “We have that now too.”

They also have a bigger kitchen and have added to their menu.” Follow Sai Wine Café on Instagram to check out some of the breakfast, brunch and evening fare. “When we opened in 2015, we wanted to do hors d’oeuvres: cold cuts, devilled eggs, cheese boards, that sort of thing.” But her wine-enthusiast customers said, “We’re enjoying the wine. But we want to eat, too.” And so the menu expanded. “We became a fully-fledged café. I won’t say restaurant and even now, that’s not something we want to be.”

Wine From Coffee and Cocoa

Besides the wine and bubbly from around the world, Ms. Nadia recently started a collaboration with lecturer and economist Professor Harrison Adjimah, who had been experimenting with by-products from local cocoa, coffee and cashew pulp in the city of  Ho, in Ghana’s Volta region. Check out Volta Winery on Facebook.

In 2018, the good professor successfully produced wine from each of these crops. Extracting the juice from the pulp, the wine is fermented in barrels and is ready for consumption after six months. The collaboration has resulted in the launch, by Takyiwaa-Mensah, of the Sai wine Volta brand.

And so, Ms. Nadia and Sai continue to put their sparkle into the burgeoning wine consumer market in Ghana.

“I’ve been humbled by God’s grace in my life. God has been so good,” she says before giving me a quickie Zoom “tour” of Sai’s sleek interior. “Sai, being God’s business, he was able to provide it all. And it’s perfect, down to the perfect fire pit and the on-site parking and our perfect new location in the heart of Accra.” Amen to that.