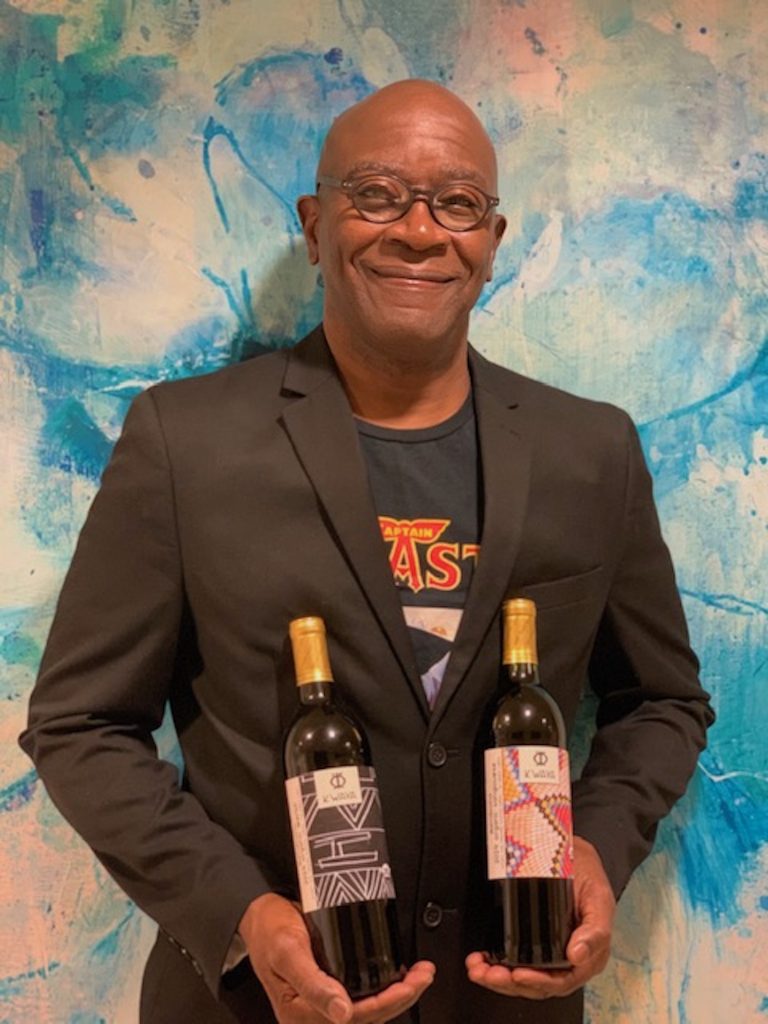 Noticing that wine is not marketed equally in Black neighborhoods, and wine production in the United States has a long history of not being culturally diverse, Nicky Coachman-Robinson set about changing that.

He wanted to create a brand for his community that would share all the wonderful benefits of organic, biodynamic wine with no added sulfites, free of GMOs and animal products, and vegan and gluten-free.  He established Kwaya Cellars in 2019 in partnership with Frey Vineyards in Mendocino, California—a longstanding pioneer of organic wines.

“It’s going in the right direction, but it’s a lot of work,” he shares.

In 2009, while living in Jacksonville, Florida, Coachman-Robinson represented food and beverage brands via appearances at his local Whole Foods Market when his appreciation for organic wine grew. He admits he didn’t know much about it at the time. A conversation with a buyer led to an introduction to Frey over the phone, and a friendship was forged with director Katrina Frey. He went on to represent Frey Vineyards in Florida for years, corresponding with the company in every way but never once meeting them in person.

That was until 2018, when a vegan food festival took Coachman-Robinson to Pasadena, California. He visited the vineyards to meet the Frey family for the first time, and eventually the question was popped, “Would you like to have your own wine varietal and label?” He said yes and they got the ball rolling.

His association and involvement with the South African wines at the time and his interest in bringing wines to the African American community took the conversation forward. “That’s an area that the wine industry was neglecting for many years. I wanted to bring the culture to the forefront as far as African Americans being introduced not only to wine but wines that are organic, have no sulfites, are non-GMO and vegan,” he says.

And thus, the name Kwaya came about. It is the Hausa word for seed. Hausa being one of the most common languages spoken in North Africa. The symbol in the logo is the Adinkra word for seed, used by the Assante people of Ghana.

“The design of the label, the name, the symbol, everything was almost like work in progress for years, and all of a sudden, in a few days, we put it all together.”

Frey Vineyards combines modern winemaking with traditional methods to produce award-winning 100% organic wines with no sulfites added. Wines are made without animal byproducts and are gluten-free. They are biodynamic and vegan and have no GMO yeast. It was a win-win for Coachman-Robinson to build his new brand under the larger Frey umbrella, to get the word out and get noticed, not having the money to indulge in commercials and advertising on TV and billboards.

Kwaya sells three varietals. The organic merlot is a rich, robust sip with deep blackberry and plum flavors. The organic chardonnay is crisp and light with some honeyed sweetness on the finish, and the organic sangiovese is zesty and succulent with a spicy finish. He has an interesting story for each.

Standing at Whole Foods all day trying to engage with customers in a creative way, the music lover in him remembered a song from the 1960s titled “Walk Away Renee.” Coachman-Robinson customized that to “Just walk away with your chardonnay.” “Customers came over, they bought it, and that’s how I really started enjoying handling a chardonnay varietal,” he says laughing.

Then came the merlot. Originally from Valdosta, Georgia, he recalls going home for a class reunion when a server at a restaurant asked if he’d like to have a “mer-lot.”  “I would say come have a lot of the merLOT,” he shares. “Everybody thought it was hilarious. Engaging people with fun and entertaining them, not just tasting the wine but having a happy spirit about having the merlot wine itself, that’s why I chose the merlot.”

The sangiovese transpired from him observing that his local Whole Foods hosted a pasta night weekly. As sangiovese pairs well with pasta, he asked the store manager if they could collaborate. “Next thing you know, chef is making pasta, people are sampling the sangiovese. It was a hit from the start, and we were doing it for months,” he says.

Proceeds from sales of Kwaya wines head to Bridges of Hope, an organization that Coachman-Robinson holds dear. A few years ago, a series of personal concerns sent him spiraling out of control and led to a serious problem with alcohol. It was the Bridges of Hope rehabilitation center in Georgia that he turned to for six months. Many questioned if he would be able to function again as a recovering alcoholic in the business. “I could only leave it in the hands of God, my faith, belief and strength,” he says.

Another reason why Kwaya’s logo has special significance. “The logo is a symbol of toughness. It stands for someone who is strong,” says Coachman-Robinson. “It inspires the individual to persevere through hardship.”

He has been sober for ten years and credits Bridges of Hope with his wellbeing. “I am in a business that I love. Even though I don’t drink, I know a lot about it.  If you’re a consumer that is interested in clean, organic wines without chemicals, we have something for you. Kwaya is a label made to have fun with people but also help people that are in need. Thanks to the wonderful vineyard of Frey to give us this opportunity to branch out on our own. Who would ever think that a little boy from Georgia now is in a first certified organic, biodynamic winery in the United States.”

Aside from Whole Foods, Costco and the Frey website, Kwaya wines are now available in Florida, Colorado, Texas and Oregon. Coachman-Robinson is eyeing California and Georgia as next the target market territories.

Asked if he has any other varietals planned, he says jokingly, “No, just these three for now…unless I come up with another song. At least I don’t have a one-hit-wonder I’ve got three.”