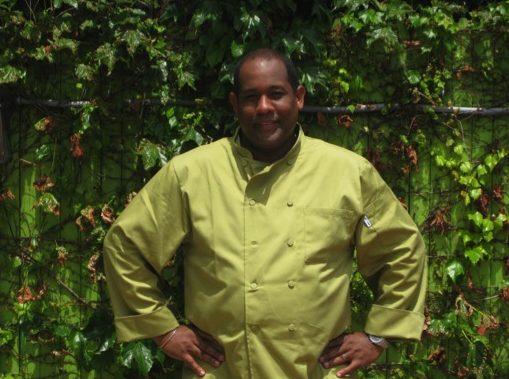 Growing up as a young boy in Kingston, Jamaica, chef Nigel Spence enjoyed the island life and the simple things that went along with it. His grandfather, who moved to Kingston from what was thought of as the country, was always cooking and referred to as a “country man at heart.” Although he had a full kitchen inside his house, he was still very much an “old-timer” who cooked everything outside on a coal stove.

Being one of two boys in the family, Spence and his brother were always around his grandfather outside watching and helping and occasionally stealing a piece of meat out of the pot when he wasn’t looking. Thinking about it today, he says “We realized we were in training and after all of these things were done, we didn’t realize how much we picked up. Afterward, when it was time for me to do some of these things, it was like wait a minute, I know how to do this but I didn’t really give it much thought when we were learning it in the backyard.”

RELATED: Next Food Network Star Winner Dishes on the Show

Jamaica’s political unrest in the 1970s led to Spence’s family migrating to America and settling in New York. Eventually, most of the family moved back, but Spence stayed with his mother and brother. When she went to work, he inherited the responsibility for cooking which allowed him to start experimenting more with the variety of ingredients and products that were now available to him in this new country. “I began to, I think, realize my love of cooking at that point. I didn’t think of it professionally but I did know that I enjoyed the praise I got probably when people would come over and eat and talked about how good it was.”

So naturally one would think that he was on the fast track to culinary school, but that decision would come years later since in fact he really didn’t know what career to pursue. Spence admits to starting one college and stopping only to start another one. Soon he settled on going to school for radiology. But he says the one thing he learned from working in this field is that it was not where he wanted to be long-term.

As culinary fate would have it, he was invited to take a tour at the prestigious Culinary Institute of America (CIA) and the rest is history. “I was so ridiculously impressed with everything that was going on there, I mean I was just blown away by the kitchen that they had, the instructors that they had and just in speaking with the instructors and the amount of knowledge that they had.” And what seemed to really seal the deal was the fact that the school grew and used Scotch Bonnet Peppers which Spence associated with his home country. The fact that the instructors were not of color and knew more about the peppers than he did, left an unforgettable impression and two weeks later he quit his job and enrolled in the program.

Throughout his tenure at the CIA, Spence seemed to be in his natural element. During his externship, he worked on the ground floor of what we know today as the Food Network which was just getting started. At that time, Bobby Flay and Emerald Lagasse were just starting their careers and Spence was there to witness both from the beginning. He recalls a show called “Chef du Jour” in which the network would try out chefs who were up and coming. If they did well, they would invite them back and Lagasse happened to be one of them. He also worked with Flay and his show “Hot Off The Grill.” “I requested to be with Bobby Flay more than anyone else because his cuisine, his style of cooking was closest to what I was interested in doing.”

After completing his program at the CIA, he went on to freelance with the Food Network for another three years. He took this time to ask the chefs “a million questions” because he knew that one day he wanted to open his own restaurant. “A lot of them had more to say about the administrative aspect of the business that they kept warning me about but obviously I didn’t want to hear that part because I was just so into the food… I wish I had listened more.”

Unfortunately, the attitude that Spence had back then still exists today among many chefs opening restaurants which has resulted in premature closings. He went on to open Ripe Kitchen & Bar in 2003 located at 151 W. Sandford Blvd. in Mount Vernon, New York, which lies on the border of the Bronx. He must have heard something during his time at the Food Network because seven years later it is one of the best spots in New York and is known for two things: real jerk and reggae.

He lovingly calls Ripe a “glorified hole in the wall” that he opened on a shoestring budget and says that from the outside one may be deceived. But when you come inside, taste the food and feel the vibes, you are left feeling like you are on the beach in Jamaica. “I recreated what most people think of on their Jamaican vacation. It feels very friendly, it feels very homey, it feels like somewhere you have been before.”

His attention to the experience customers get once inside has truly paid off. The menu that once started with just a few “small bits” has evolved into a culinary sensation. Jerk chicken quesadilla, island-style spicy pepper shrimp, rasta pasta and the newest addition that he can’t seem to keep on the grill, Ripe’s “Big-Ass” jerk rib-eye steak, are just some of the island cravings that customers come for.

In addition, Spence has built up quite a career over the years. Called the “King of Jerk,” he went back to the Food Network again but this time as a contender against Flay on “Throwdown with Bobby Flay,” where he walked away the victor. He has appeared on “Chopped” which made its debut on March 21, 2009 and local TV shows such as “Tony’s Table,” “Neighborhood Eats” and “Martha Stewart’s Living Today.” And he works with the Jamaica Tourist Board as the ad hoc culinary ambassador for North America. Current plans include an endeavor back home in the providence of Portland that is scheduled to open this October just in time for the Port Antonio Blue Marlin Tournament.

Back here in the states, lovers of Caribbean cuisine can join Spence on Monday, September 20 at the Whole Foods’ Bowery Culinary Center at 95 East Houston Street in New York. For more information on the time and class prices, contact 212.420.1320.

It is amazing how an unforeseen journey started as a young boy and now he is able to pass down the same love of Caribbean food as his grandfather to all of us on a daily basis.


Chef Marvin Woods: A Talk with One of the Country’s First Celebrity Chefs
Preston Clark: A Rising Tribute to a Father’s Legacy