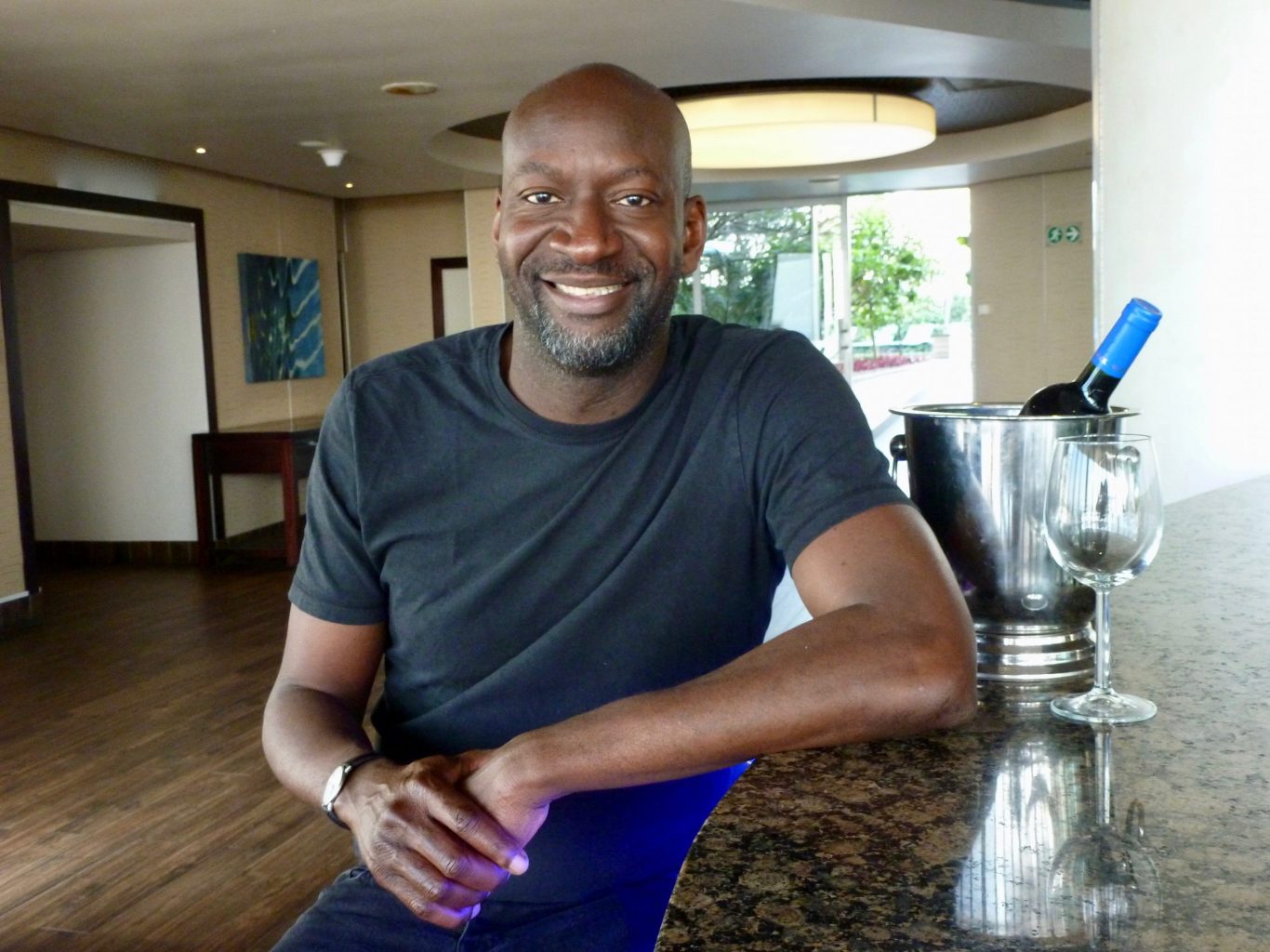 One doesn’t expect to find similarities between making movies and making wine. “But there is an affinity between winemakers and filmmakers,” says Akin Omotoso: actor, director, scriptwriter, producer and founding partner at Rififi Pictures, a multi-award-winning television and film production company.

For starters, “It takes a year-and-a-half to make a bottle of red wine and a similar timeframe to make a movie.”

Then, “When you’re making wine, the product you’re crafting relies on nature, on the weather, on when you press the grapes… These and other—unpredictable—factors mean that what you finally pour may not taste the way you hoped.”

Similarly, with film, “There are many variables. What you end up with might not be quite what you expected.”

Omotoso saw this “kindred spirit” analogy while making the documentary The Colour of Wine, an absorbing film that, via stories and interviews—and set against a backdrop of some spectacular panoramas—traces the 300-year history of winemaking in South Africa, with a focus on post-apartheid challenges and the growing numbers of black winemakers, previously excluded, now making superior, internationally acclaimed wines.

The film premiered at the 2018 IRepresent Documentary Film Festival in Lagos, Nigeria.

Cuisine Noir caught up with Omotoso in South Africa at the 39th Durban International Film Festival—his documentary’s third festival outing—where we sat and talked wine and film at the pool deck bar of the five-star beachfront hotel where the 2018 festival was headquartered for its 10-day run.

People like Omotoso are not at the festival simply to screen their movies. Running parallel are workshops and outreach programs highlighting the “no filmmaker left behind” theme; again the focus being on the previously excluded. Established filmmakers and success stories from around the world give workshops, classes, lectures, appear on panels and do their bit to support and nurture emerging talent, along with South Africa’s National Film and Video Foundation, the Durban Film Office and other Africa, U.S. and European-based film bodies.

As an aside, let me say that anyone interested in both movies and in discovering Durban might consider planning a vacation here during the film festival. There are scores of screenings, some of them free, in cinemas and other venues around the city. Directors, actors and filmmakers arrive each year from around Africa and the world to talk about their films. The Durban winter weather in July, film festival month, is invariably sunny and warm; beach weather in a lively Indian Ocean resort city. What’s not to like?

“Making the film was a fascinating process of investigation and inspiration,” says Omotoso.

“We did research into the South African wine industry and discovered all this protectionist stuff about how it operated during apartheid. How, with the international boycott of South African wines, the industry was in the doldrums by 1994 (when the first democratic elections took place and Nelson Mandela became president).

“How, post-1994, it started to transition.” Slowly at first and with roadblocks and huge challenges for “first-generation” Black winemakers, essentially industry pioneers.

“The research and the very troubled history set the template for the film,” Omotoso continues. This against a backdrop of gorgeous South African wineland vistas; mile upon mile of rolling vineyards set around small historic towns and backing up to craggy mountain peaks and in some places the ebb, flow—and when the storms come, thunder—of the Indian Ocean.

Nigerian-born Omotoso—urbane, thoughtful, friendly, direct—relocated to South Africa with his family in 1993. He now moves seamlessly between the two countries; making films as well as acting in films. The Colour of Wine, shot in Cape Town, New York and Soweto, is at one level about the sensual nature of wine, with lots of easy-on-the-palate wine-appreciation lessons. “Nobody who takes their first sip of wine is going to enjoy it,” is a message shared more than once.

By tracing the stories of four young winemakers—the first Black students in the early 90s to study winemaking, fraught and alien at the time—he has made a film that gives a first-person “human” account of South Africa’s transition from apartheid to democracy.

Three of the protagonists we are introduced to had no idea, when they set out, that such a thing as a career in wine existed. All had to attend lectures in a foreign tongue (Afrikaans).

It is also a story of wine appreciation and the culture of wine. And a call-out for mentorship; if you’re not exposed to something, you might have all the talent in the world but it will never be realized.

Ntsiki Biyela, now an award-winning winemaker and one of the four, was previously interviewed by Cuisine Noir. She and two of the others we get to know in the film grew up in rural villages—in her case, with no electricity, where women collect water in containers from the river and water points and where chickens scratch in the dust between the simple dwellings. Rural, basic living.

When offered a scholarship to study viticulture and oenology at Stellenbosch University, Biyela had no idea what the resulting career might look like. Nor had she tasted wine. She just saw the scholarship as “an opportunity to change my life” and jumped at the chance—as did a second woman, Unathi Mantshongo, and the one male among the four, Dumisani Mathonsi, who hails from a rural town near to where Biyela grew up in KwaZulu-Natal province, far from South Africa’s winelands.

Wine-success Carmen Stevens is the exception among the four in that she was familiar with wine and grapes and knew from a young age she wanted to study winemaking and work in the industry. But as a pioneer in terms of race and gender, knowing what she wanted didn’t make her path easier.

All four forged a route for the growing number of Black sommeliers, winemakers and wine-industry executives now striding ahead in what, as recently as 25 years ago, was a predominantly white and male business in South Africa.

When Omotoso started working on the film, he wasn’t much of a wine enthusiast. “I drank more winemaking this film than during the rest of my life up till then,” he tells me with a laugh, adding that making the film gave him some valuable insights.

“We had the best of both worlds. The best wines and extremely charismatic people: both those who made the wines and others we interviewed, in the film, representing the industry.”

“I am an occasional drinker,” he says when I ask if he drinks more wine now than he did before. “Often, when I’m eating, I will opt for water. If I’m going to drink, it will most likely be rum and Coke. My late mom was from Barbados. I associate rum with my late grandfather; it’s very West Indian.

“In Nigeria—how shall I put it—there is a culture of wine. There are a lot of wine bars. But the country doesn’t have the climate to grow wine grapes.” Instead, “traditional” kinds of wine are made, like palm wine.”

“My dad (Kole Omotoso: writer, intellectual, retired academic) is a wine enthusiast. My introduction to wine was watching him and his friends, back in the 80s enjoying wine, discussing it, appreciating it. They were very well-versed in wine culture.”

There’s something very civilized—or civilizing—about drinking wine, he acknowledges. “It seems to break down barriers between people; bring people together. I can’t put my finger on it, but it does something for people in a positive way. And I know there are a lot of people passionate about wine.”

His passion and obsession, however, is film. “I will watch a movie five times, 10 times, analyze every aspect of it. I will watch two minutes of a film over and over again.

“I see people who are obsessed by food and wine. And I admire them. Everyone should have a passion. And making the film has given me more of an appreciation for the culture of wine as well as the product. I discovered, for instance, that merlot is where my palate lands.”

Making the movie has also refined how he buys wine. “Before, I would go into a store and randomly choose a bottle. Now I have more of an appreciation and have become a lot more conscious. I ask who made the wine. Is the label that of a Black winemaker? I want to support Black winemakers and what they’re doing.”

The good news is, giving this kind of support and choosing “the color of wine” beyond a red, white or rose is getting easier all the time.