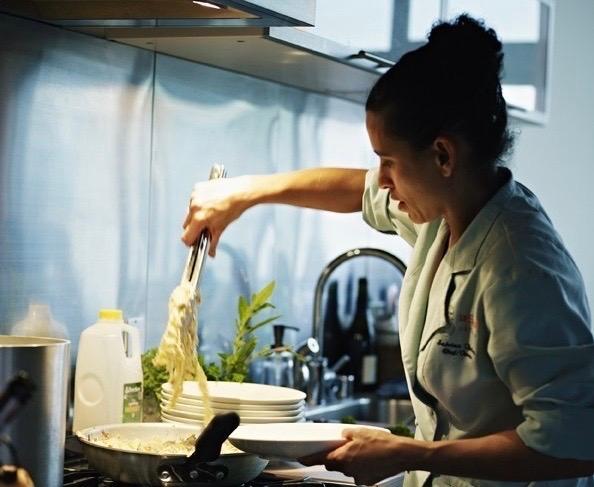 Stroll into this Capitol Hill space of soaring glass, warm wood and modern ironworks and you will find a love story. It begins with an American girl, just out of college, traveling to Europe for a culinary adventure. Sabrina Tinsley takes a job in Salzburg, Austria where she meets a young man from the Emilia-Romagna region of Italy. One wedding, two children and several restaurants later, they are living their dream by celebrating authentic northern Italian cuisine at Osteria La Spiga in Seattle.

“I’ve always loved Italian food, but when I tasted authentic Italian food for the first time, I was blown away. It’s so different. It’s poetry to the mouth, for sure,” says Tinsley, the chef at La Spiga.

Tinsley and her husband, Pietro Borghesi moved into the 6,000 square foot restaurant on 12th Avenue in 2006. It greatly expanded the family enterprise they envisioned when they left Italy for Seattle and opened a small place in 1998. Borghesi’s brother, Francesco, designed the interiors of both restaurants, and Tinsley’s sister, Sachia, worked with them before later opening Peyrassol Cafe with her husband.

RELATED: Good Girls Go to Paris: Where Crepe Lovers Stop for a French Moment in Detroit

The transformation of La Spiga’s atmosphere, from small and intimate to large and modern, has not changed Tinsley’s commitment to the food. She wants patrons to fall in love with the kind of dishes she learned to make during her six-year stay in northern Italy.

“They can certainly expect an all-encompassing Italian experience. A lot of people who have been to Italy feel they’ve walked off the streets of Seattle into an Italian restaurant,” says Tinsley. She and Borghesi, the restaurant’s general manager, strive to make the dining experience as close to Romagnola cuisine as it can be.

In 2011, Seattle Magazine included La Spiga on its list of five spots that serve perfect lasagna. Tinsley’s $16 Lasagne Verdi is much lighter than the American dish usually made with lots of cheese and meat. “We just use bechamel, ragu and parmesan with spinach lasagna noodles,” she says.

Tinsley developed her passion for food and cooking while growing up with her African- American parents in Fairbanks, Alaska. Her mother prepared different cuisines with the fresh produce and meats available on the family’s land. Later, she enjoyed farm to table freshness while traveling with Borghesi and opening frozen yogurt and piadina shops in Italy. Both experiences inspire La Spiga’s seasonal menus.

The antipasti selections, whether it’s prosciutto di Parma deboned in-house or Italian artisan cheeses, come with the piadina flatbread, one of the signature items.  The price range for antipasti is $7 to $16. A rack of lamb for $29 or a grilled pork sausage for $17 are among the list of entrees.  For dessert, there is sweet cream gelato with amaretto and meringue or house-made tiramisu based on a recipe from Borghesi’s mother, both for under $10. The lunch menu primarily features house-made soups, salads, piadina, and panini. Most selections are from $5 to $14.

La Spiga received a Diners Choice award from OpenTable for its impressive list of Italian wines. Patrons can also enjoy imaginative cocktails as they sit at the massive bar. There are intimate corners to get cozy as you take in the Seattle cityscape. Or you can dine on the outdoor patio while watching an Italian movie. Want La Spiga at home? Retail pastas, sauces and wines are sold at the restaurant, online and through AmazonFresh.

Tinsley still spends most of her time in the kitchen overseeing the line cooks. Borghesi is out front, focusing on giving diners the same friendly, family-oriented service the smaller La Spiga once delivered.

“We are considered a staple in Seattle. People who understand Italian cuisine recognize that we are the most authentic Italian restaurant in Seattle, so far,” Tinsley says. It is a distinction, she and Borghesi hope to retain while attracting tourists and locals to their landmark restaurant.

Osteria La Spiga is located at 1429 12th Avenue in Seattle, between Pike and Union on Capitol Hill. For more information, visit www.laspiga.com or call 206.323.8881.